A revamp of a prestigious beachside course in Sydney presented a series of challenges across two distinct parcels of land.

The Manly Golf Club, established in 1903, is one of Sydney’s most prestigious golf clubs. Between 2010 and 2012, the courseunderwent a major reconstruction which has reinvigorated Club. The improved layout and playing conditions have attracted new members, also increasing the patronage of the Club’s facilities significantly. It is interesting to recall what was a complex and challenging journey for all those involved in this ambitious project. – Ross Perrett

An aerial view of the revamped Manly GC layout in Sydney, showing its two distinct parcels of land, water courses and proximity to the coast. The improved layout and playing conditions have attracted new members to the course. – Manly Challenge: Jigsaw Puzzle – Answering the Challenge at Manly GC By Ross Perrett – Issue 19 – Ross Perrett

Manly is one of Sydney’s exclusive suburbs that is located between the harbour and the famous Manly surf beach, so it is no surprise that land in this location is extremely valuable. This underpinned what took place at The Manly Golf Club, where the sale of a small parcel of land was the catalyst for change. The Club’s car park was located on the opposite side of Balgowlah Rd to the course – which was not ideal given the aging membership and the busy road. Consequently, it was decided to sell the car park as a development site to partially fund the course redevelopment.

With funding potentially available, the planning of a major course upgrade commenced. However, the task became progressively more complex as the reality of the site was understood. The site for the course is only 41hectares – which is small by modern standards and exacerbated by the fact that the course is divided into two parcels by Kenneth Road with each linked by an underpass. To further complicate the site there are two creeks that run through the course; approximately two thirds of the course is flood-prone; undesirable acid sulphate soils were present; and there were significant environmental overlays with respect to tree clearing, drainage and flooding.

The Club had an ambitious brief which apart from building a new carpark and improving the course layout involved: replacing the push-up greens with USGA construction; changing the grassing regime from Kikuyu fairways to Windsor Green, and Poa annua greens to A1 Bentgrass; installing a new irrigation system; improving the practice facilities; increasing their water storage; improving drainage; and enhancing the course’s indigenous landscape. Also, the retention of their double green – designed by Dr Alister MacKenzie – was mandatory (the green is the putting surface for the 1st and 17th holes in the new layout). The brief was realistic however, as the major focus was to deliver an enjoyable course that members could play all year round and be economically managed.

The course architect’s challenge was to satisfy the brief within the numerous constraints of the site – rather like putting together a jigsaw puzzle. Two-dimensionally, space was at a premium and the existing treed corridors needed to be respected. However, the layout evolved relatively quickly with the key being the unlocking of some previously unused spaces which were incorporated into the revised course layout. The most demanding design challenge was improving the surface drainage on those parts of the site that were flood-prone whilst at the same convincing the authorities that the new landform was not impacting on the flood-retarding ability of the site. 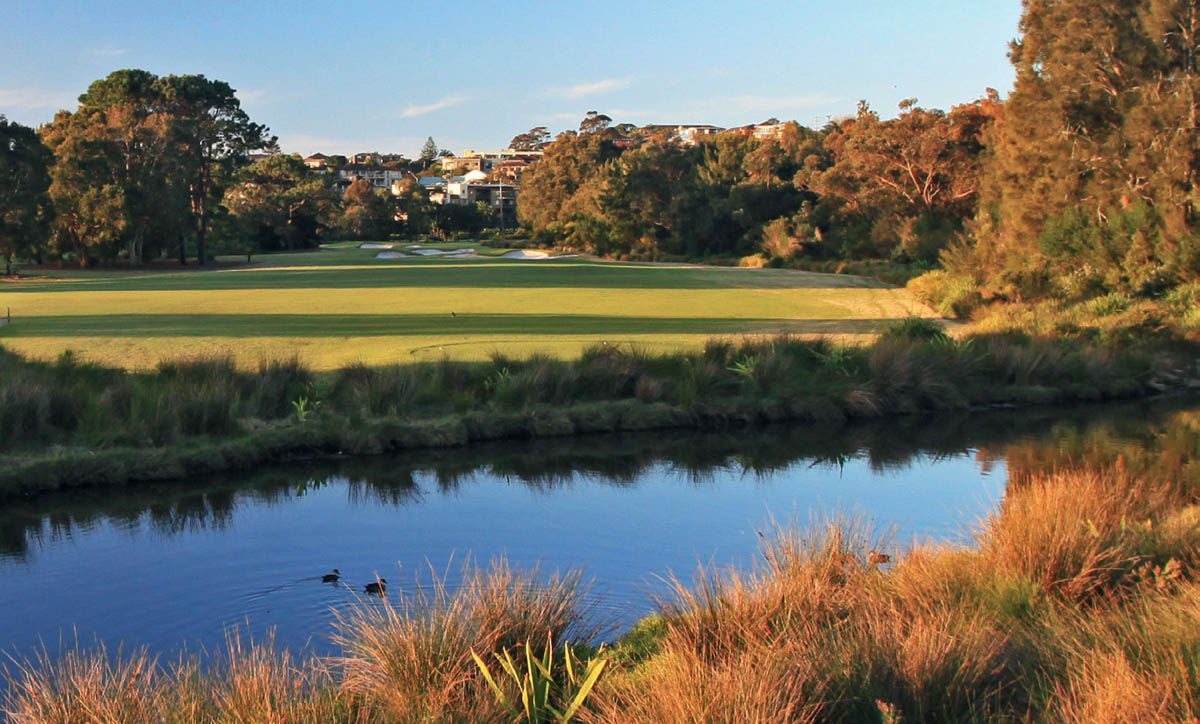 After all the site constraints were considered, a golf course masterplan was adopted, documented in detail and a planning permit obtained for the works after much negotiation with Government authorities. It was always planned that the course would be constructed in stages, so that members would maintain access to part of the golf course for play at all times. This was well managed by the Club through good communication with the members.

The best angle in to the long par-4 6th, from under the fairway bunkers on the right edge of the ‘short stuff’. – Manly Challenge: Jigsaw Puzzle – Answering the Challenge at Manly GC By Ross Perrett – Issue 19 – Ross Perrett

Prior to starting the construction of the major golf works the new car park was built on what previously was the first hole, seeing it shortened to a par-3 (now hole 11). The golf works were built in two stages, starting with what was termed the ‘North Links’ (holes 2 to 9 on the flood-prone land north of Kenneth Rd) followed by the ‘South Links’ (holes 1, 10 and 12 to 18). In sequence, separate tenders were called for each stage, which interestingly were won by different contractors – the North Links were constructed by Flemings Golf and the South Links by McMahons Pty Ltd. Despite this, a seamless continuity of the design was achieved, with consistently high standards of construction. The day-to-day supervision of the works was managed by the Club’s then Course Superintendent, Michael Bradbury, whose attention to detail was critical to the success of the project. (He was awarded the 2013 AGCSA Excellence in Golf Course Management award for his efforts.) 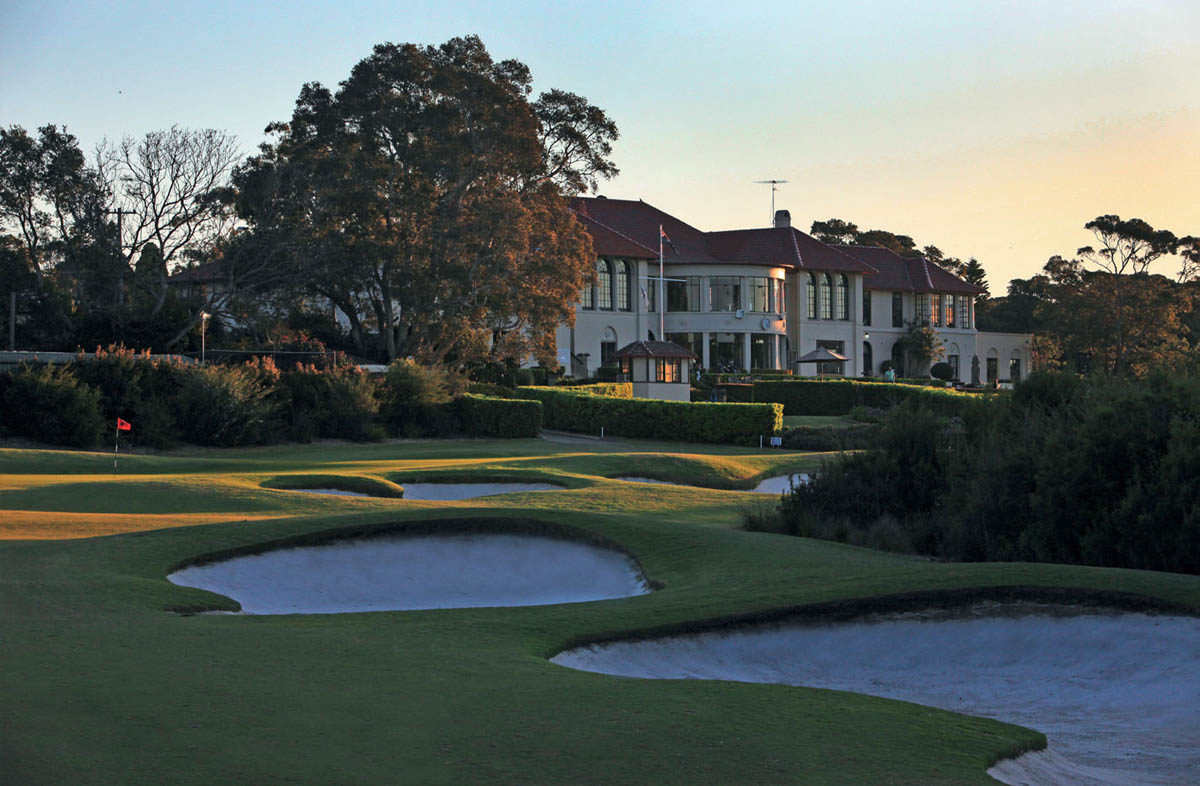 Bunkers on the approach to the uphill par-4 10th green which is sited by the clubhouse. – Manly Challenge: Jigsaw Puzzle – Answering the Challenge at Manly GC By Ross Perrett – Issue 19 – Ross Perrett

From a design perspective, once the course routing was agreed the attention moved to the detail of the putting greens and the bunkering, and how to best present the course aesthetically. The course landscape became a key focus, with the retention of the mature indigenous trees and the removal of undesirable species. In addition to this editing process, new plantings were introduced to provide backdrops to greens and a ground plain introduced to frame the playing surfaces on what had previously been an open parkland course. In particular, creeks that run through the course are well landscaped and this forms part of the strategy on some holes where some golfers will choose to lay up, effectively lengthening the course. 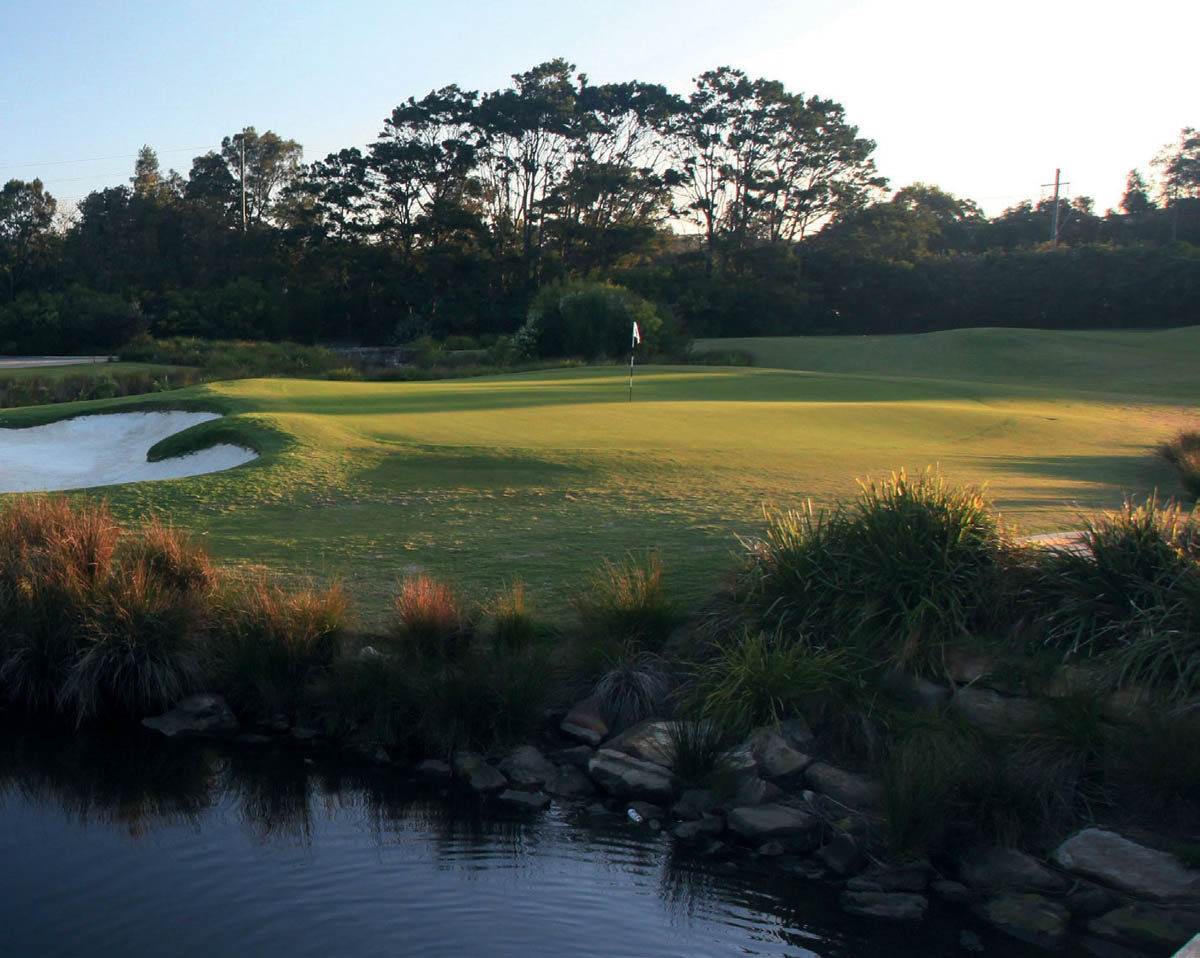 The green at the short par-5 3rd hole is flanked by a horseshoe of water. – Manly Challenge: Jigsaw Puzzle – Answering the Challenge at Manly GC By Ross Perrett – Issue 19 – Ross Perrett

Five years on Manly’s new course has settled in well and continues to attract new members to this proud Club. It is testament to the shared vision and strong leadership of the Club that it continues to prosper in what are challenging times for private golf clubs. There have been some minor tweaks to the new course since its opening but generally these relate to the management and monitoring of the indigenous landscape which has become a dynamic feature of the course.