In its purest form, restoration takes the architect’s thoughts out of play; but sometimes it is not immune to an impure intent.

At some point in the 1980s, golf course architects and even some committees started talking “restoration”. Prior to this, the idea of putting another’s design back was relatively new. And why wouldn’t it be? In an era when golf course design was booming and architects had a seemingly endless supply of projects, why would you spend your time putting someone else’s work back, when you had your own legacy to leave? – Michael Cocking

But as this age of excess petered out, a new style of architecture emerged: Minimalism. With its natural look, attention to detail and lighter touch on the landscape, it was a throwback to an earlier era, helping to reignite an interest in golf’s golden age (1913 to 1935) which was dominated by architects such as Macdonald, Ross, MacKenzie, Thomas, Tillinghast and Raynor. A passionate few would spend days (and nights) trawling through old aerials and plans to reveal previously forgotten designs and before long restoration projects started appearing throughout America, continental Europe, the UK and even down here in Australia.

Fast forward 30 years and restorations are relatively commonplace, although the intent can sometimes be a little foggy. In its purest form, restoration takes the commissioned architect’s own thoughts and ideas largely out of play. (At its murkiest, plans are nothing more than a guide, and the ‘restoration’ is used as a selling tool to get changes through the membership.) Two of the best examples of a purist approach can be found in America; first at Pinehurst, where Coore and Crenshaw painstakingly restored Donald Ross’s masterpiece to its 1935 incarnation, when the sand-scrapes were converted to greens. While on the other side of the country, Gil Hanse and his team went about uncovering George Thomas’ brilliant design on the North Course at LA Country Club – unveiling layers of dirt like an archeological dig.

In both instances the design teams tried to be as faithful to the original designs as possible. Old maps, plans, irrigation designs and photographs were sourced to find the original fairway edges and features, such as greens and bunkers which had been grown over or moved. At Pinehurst, even Ross’ own account of the layout, written for the program of the 1936 PGA Championship, was used – documenting the options and strategy he had tried to incorporate and which the team was looking to restore. Beyond just the look of the course, they also worked closely with the superintendent to bring back the ‘mottled’ look of the playing surfaces, so they would blend better with the rugged native areas.

In Los Angeles, Gil, Jim and the Hanse Design team would use photos and maps to narrow down the search area but then rely on machine work to peel back layers of dirt until they hit pay dirt – or pay sand, as was the case. Sand was a significant find, as it was often evidence of a lost bunker, as was a change in topsoil where the edge of a green may have revealed itself.

Both were about as pure a restoration as one could expect, but there were still areas where the ‘restoration’ was fudged a little. Clearly tees are an obvious area of change, taking into account the distance the modern ball flies, but arguably by adding some length the shot value for the approach is restored – i.e. a driver / mid-iron hole from 1930 should still play as a driver / mid-iron in 2017, even if that means adding 90 yards. 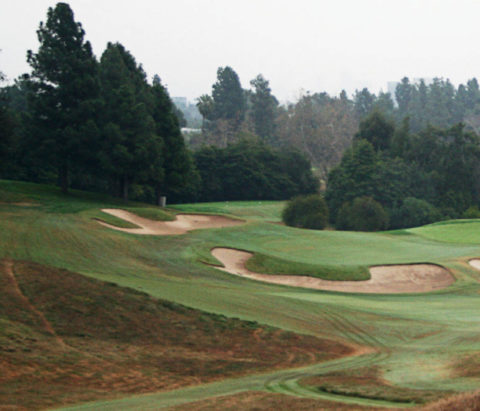 GLORY RESTORED: The original design of the par-3 11th hole at George Thomas’ LA Country Club featured rough surrounds and irregular shaping (below right); the detail was lost over time (below left in 2005) before being restored (main, 2012).

A STUDY IN TIME: Aerial photos show the evolution of the long par-4 6th at Melbourne’s Kingston Heath GC, including its bunkering, definitions of rough and trees. Note the ‘lost’ bunkers short of the putting surface in 1931, the shaded green from dense tree canopy in 1964 and the ‘returned’ fairway bunker of today’s play

Frequently the area that requires most guesswork comes with the greens contouring. No matter how many plans or photos you have at your disposal, the area which is hard to find accurate details on are the slopes on greens. Sometimes if greens are to remain where they are, digging down can reveal the various layers of topdressing, like the age-revealing rings of a large tree. But if the green has been relocated it’s often left to the architect to try to replicate the style – unless a photo from ground level or an accurate playing account exists. 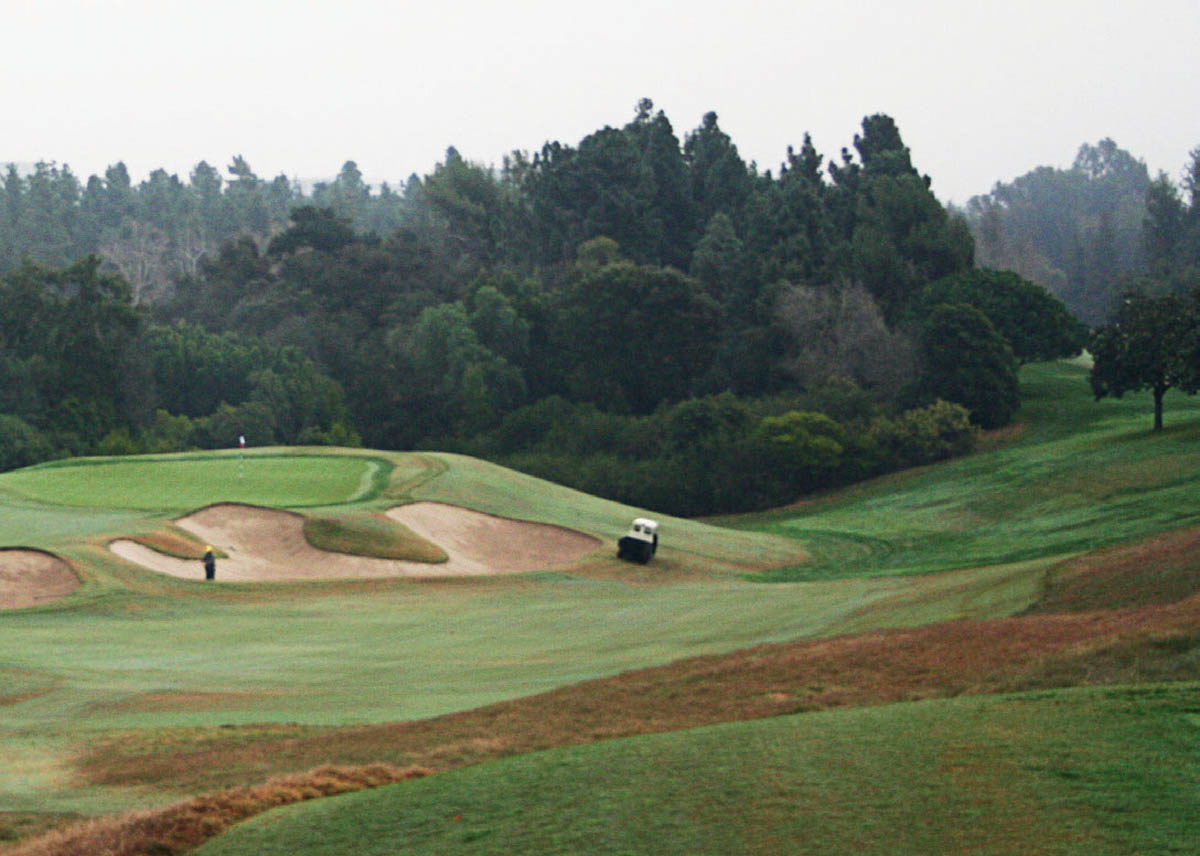 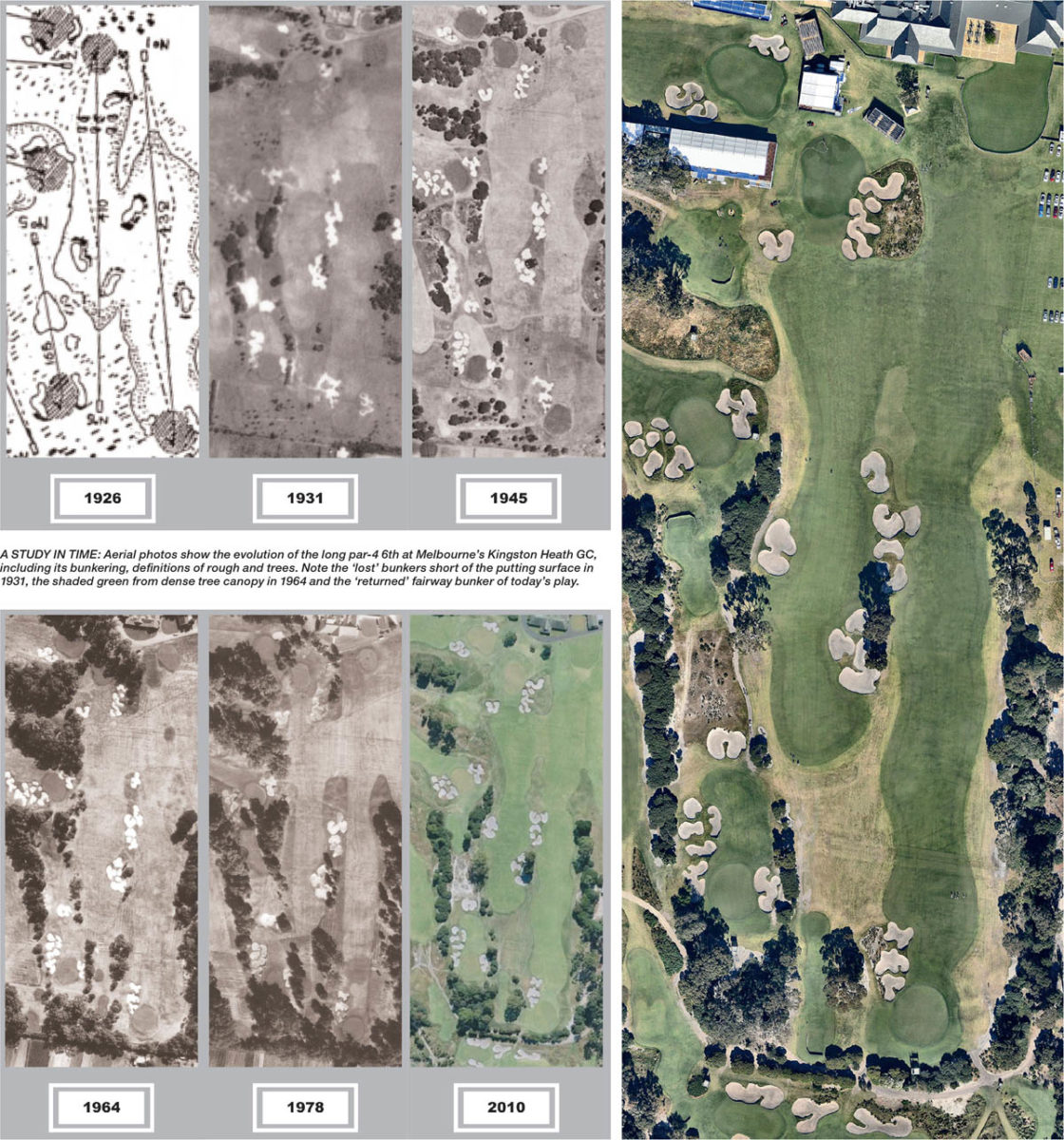 Mowing heights and green speeds have also had their share of influence. When the great courses of the Golden Age were built, greens speeds were much slower, down around 6 or 7, which meant more severe slopes could be built into the designs. In 1978 when the Stimpmeter was first developed as a standard measuring tool for green speeds, the USGA sent out representatives to measure green speeds around the country. The results are somewhat surprising, with a few of the more prominent courses as follows:

Nowadays these same courses are regularly at 12 or 13 on the Stimpmeter – which has in turn forced changes to greens that goes beyond restoration, just to allow a reasonable number of pin positions. As architects we’ve seen pinnable slopes go from five per cent slope now closer to just two. In fact, the PGA Tour won’t consider a pin unless it’s under 2.5 per cent.

Initially Pinehurst didn’t want to tinker at all with their greens; however, two greens were tweaked where excess contours had developed over the years (15 and 17), most likely the result of a build-up of topdressing and wind-blown sand from the nearby bunkers. This is common to old courses – even when built away from the sandy ground of North Carolina. Green edges near bunkers can often rise over a foot in a few decades (more if particularly susceptible to strong winds). Quite often the predicament here comes when the lips are lowered, as much of the difficulty of the green results from change and too much restoration can leave them defenseless.

Away from these purist examples of restoration, there are many others that start to get a bit diluted. Sure, the concept behind the original design might be restored, but it might deviate slightly from the exact plan. Is that a bad thing? Well, not necessarily. Sometimes restorations infer that the original architect had it right. That their design was the most perfect version of the hole and every change since has been to its detriment. But who has the vision to have known what the original architect was thinking? Were they hamstrung by the client? Perhaps there were budgetary limitations. In the 1920s and ’30s, travelling was not as easy as it is today and frequently architects saw little of their design after the routing and one or two construction visits. Would they have been happy with everything they saw? Who’s to say then that everything should be faithfully restored, if there’s a chance it wasn’t that good to begin with?

For me, courses that have evolved over time through multiple influences are the more interesting. Take Kingston Heath for instance. Originally laid out by Sydney professional and 1903 Australian Open champion Dan Souter, the club engaged MacKenzie’s help to bunker the course while in Australia to design Royal Melbourne. His most significant change was of course to shorten the short, blind par-4 15th into the iconic uphill par-3 it is today, but he also prepared a bunkering plan for the course as well as a few new tees. Mick Morcom, the builder of the course for Souter and the greenkeeper at Royal Melbourne, would build the work but from accounts he would only take on the job if able to deviate from MacKenzie’s plans. Perhaps he was aware of MacKenzie’s tendency to exaggerate some features in his drawings, or maybe he wanted the licence to add some of his own ideas into the design of the course? Either way, the course was a success but, in many places, quite different to the MacKenzie drawing. Soon after Morcom’s son (Vern) became the head greenkeeper and many more changes were embarked upon – a new green at the 13th, plus subtler changes to 7 and 11, a number of new bunkers plus a reworking of all the original bunkers, replacing the larger flashy traps his dad built into smaller clusters less prone to erosion. Through the war years and the greenkeepers that followed, the course continued to change. Holes became overgrown with vegetation, bunkers were lost and fairway lines changed, until in the 1980s superintendent Graeme Grant and the Captain of the day Bruce Langford-Jones set out to “restore” the golf course. Some of this was researching old aerials, plans and reports but there was also field work: crawling through the ti-tree to uncover the “lost” bunkers left of the 12th.

Whilst restoration was a primary goal, changes were also made. Tees were rebuilt in the free-form style, which have made these a source of inspiration for architects all over the world. Bunkers were added or moved, green surrounds modified and, more significantly, new greens created at the 6th, 13th and 18th were redesigned.

For the past decade or two, we (Ogilvy Clayton Cocking Mead) have acted as the consultant architect, continuing to make refinements to the course. Some have been of a restorative nature with changes fairway mowing lines, the revitalization of heathland areas particularly in the tee carries and reworking bunkers on the 6th, 11th, 12t and 18th. But there have also been changes, which aren’t based on historical evidence; new tees on 1, 2, 3, 4, 6, 11, 13, 16 and 18 linking greens to tees around the course with short grass, and the construction of a 19th hole.

As the photos of the 6th illustrate, the course has changed a great deal, and yet I believe today’s course is the best version in its 100-year history. Any attempt to take a purist approach and restore to a particular era would almost certainly be to its detriment. Its strength lies in the product of multiple architects, greenkeepers, superintendents, captains and committeemen.

Often restoration is a worthy goal, but it may not always be the best result for the course. Each project needs to be judged on its own merits and requires thought and research to determine both the worth of the original design and if subsequent changes are worth retaining. Restoration for restoration’s sake is to be avoided but so too is redesign which pays scant regard to the links to the past. Best to tread carefully because once lost, some of these wonderful old features never quite come back the same.