At The Ready – Tournament Preparation

A significant golf tournament is played somewhere in the world almost every week – and the preparation involves a lot of planning by a host of talented people.

The global golfing calendar is overflowing with both Amateur and Professional events that are ideally scheduled to be played when the weather and course conditioning is at its best for the particular location and when TV audiences can be maximised. The competition for timeslots is such that it is not always possible to optimise the playing schedule. – Ross Perrett 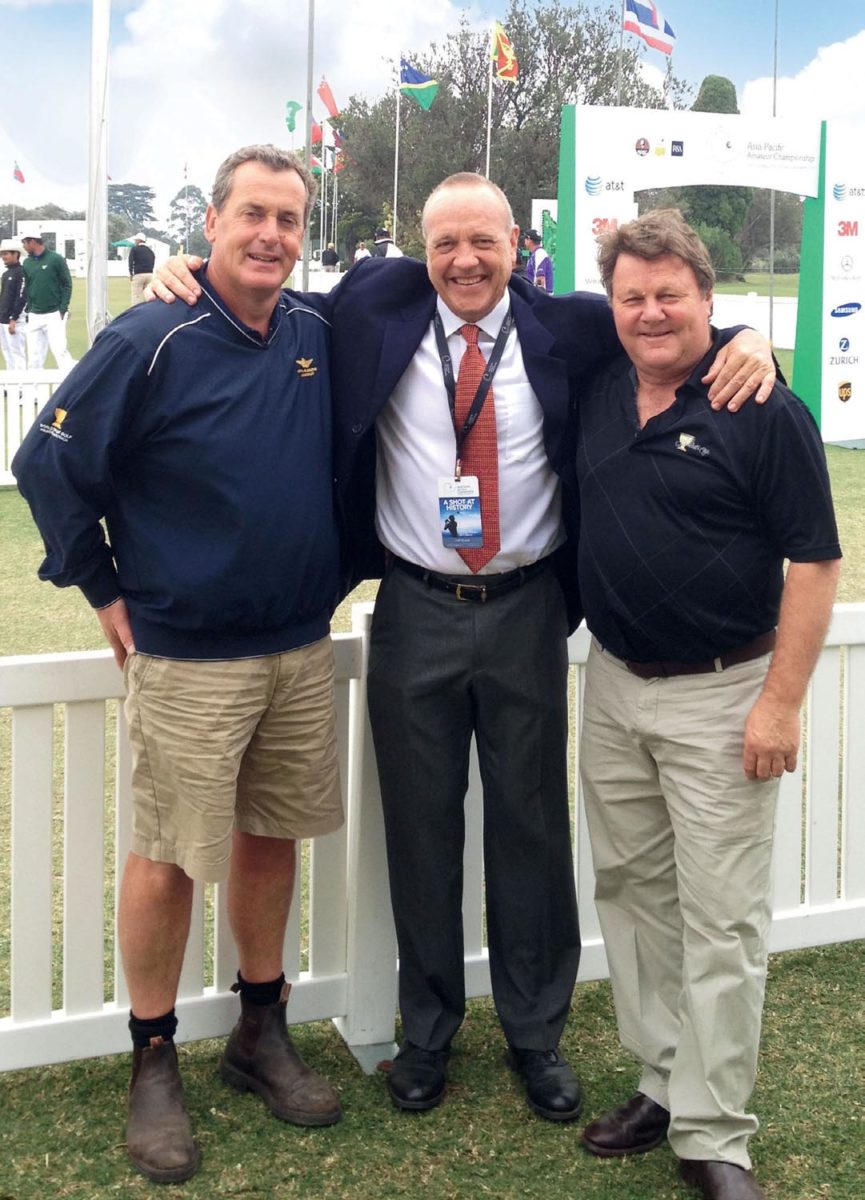 A relatively new event that is creating great interest in our Region is The Asia Pacific Amateur Championship, an event organised by The R&A in partnership with The Asia-Pacific Golf Confederation (APGC) and the Masters Tournament. It is particularly significant as a means to promote golf in the emerging market of Asia-Pacific and brings together the best amateurs from each country. The top two ranked players in all 38 APGC Member Associations are invited with the balance of the 120 players made up of the highest-ranked players on the World Amateur Golf Rankings (WAGR). The winner is invited to play in the US Masters at Augusta National.

The 2014 event was played at The Royal Melbourne Golf Club, the region’s premier course which has given great prestige to the Championship. Royal Melbourne has in recent years made itself available for numerous international events including The Presidents Cup (2011), The Women’s Open (2012, The World Cup of Golf (2013), The Australian Masters (2013) as well as The Asia-Pacific Amateur Championship (2014). There is no doubt these recent tournaments have reinforced Royal Melbourne’s reputation as one of the world’s greatest golfing venues. 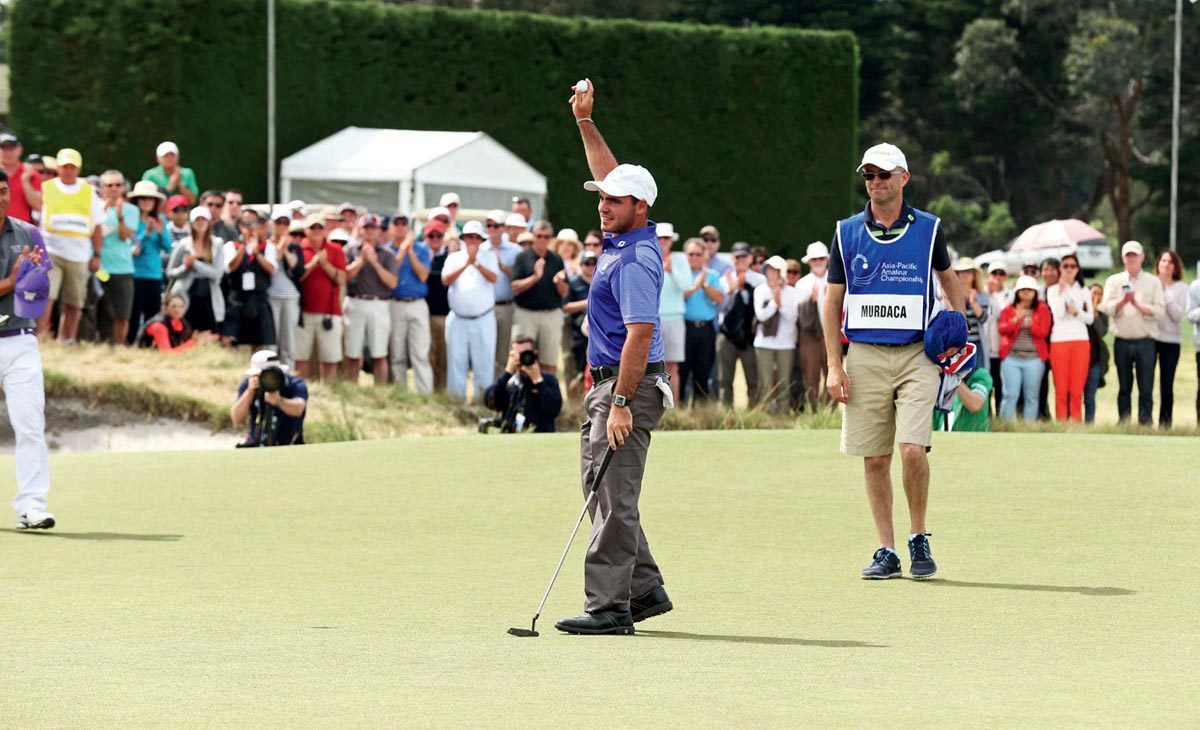 To facilitate the hosting of The Presidents Cup, the team at Royal Melbourne under the leadership of CEO Paul Rak and Course Superintendent Richard Forsyth undertook the massive task of completely re-grassing the course. The greens were planted with Sutton’s mix with seed sourced from their original greens and grown in New Zealand, the aprons with a blend of fine fescues and the fairways with Legend couchgrass, a derivative of a Victorian native couch. The task also involved a completely new irrigation system which hard-lined the fairways to minimise the couch spreading into the native grass roughs and to highlight the contrast between the playing surfaces and the sparse, sandy non-playing surfaces. The coarser Legend couchgrass was preferred over the finer Santa ana couchgrass variety commonly used on Melbourne courses as a means to limit ball run on the fairways and to spread wear. 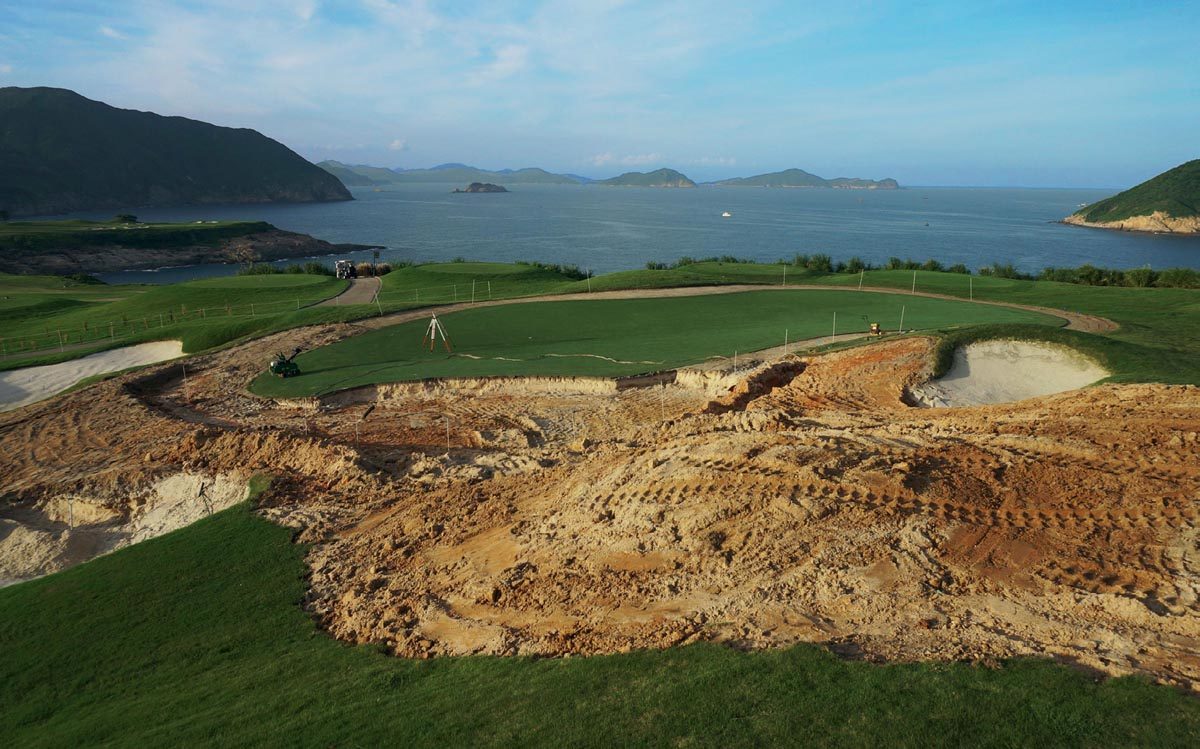 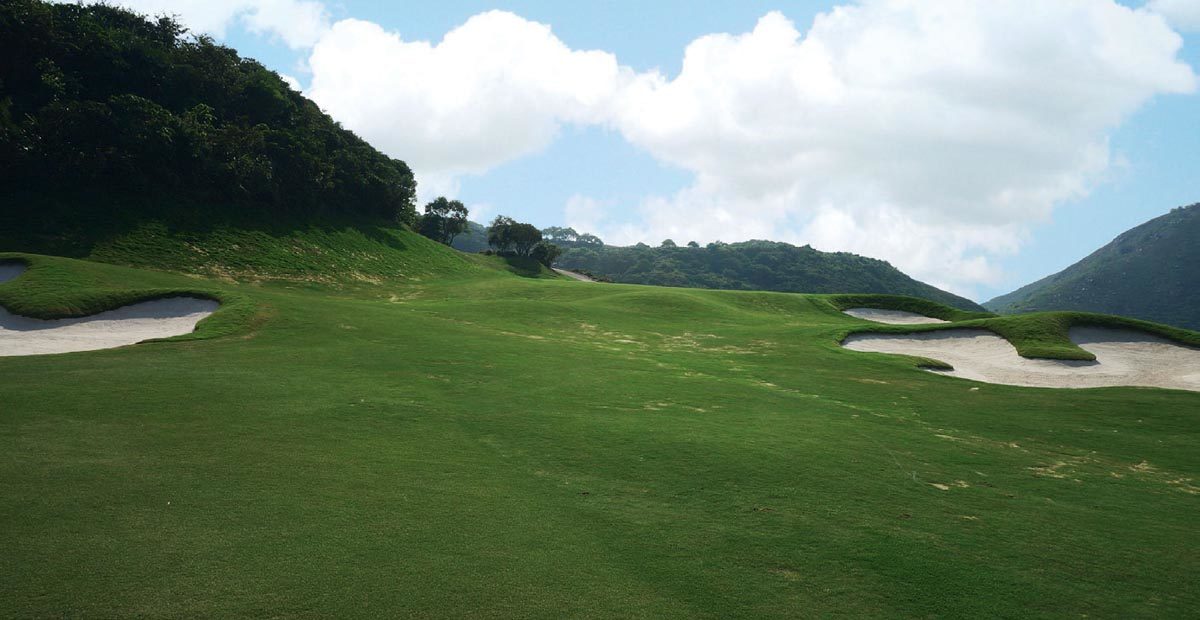 FINISHED: The new 9th green at Clearwater Bay; green speeds will be restricted to 11 on the stimp meter to combat the wind. – At The Ready – Tournament Preparation – Issue 16 – Ross Perrett

Royal Melbourne was the first course outside of Asia to host the Asia-Pacific Amateur Championship. It followed on from the event being played in China, Japan, Singapore and Thailand. The optimum time for a tournament in Melbourne is in February after a full summer’s growth for the couch grass fairways. Therefore, hosting the event in October posed some challenges for Richard and his team as the couch fairways were barely out of dormancy, with no time to grow out the winter divots. Despite this the course presented brilliantly. The real defence at Royal Melbourne was as always the hard-and-fast greens. Wide fairways, little rough and a relatively short course of just over 7000 yards make it vulnerable to the modern elite player and golf ball technology. Royal Melbourne’s strategy comes to the fore when the greens are firm and bouncy, with good holing speed. The staff work hard on this aspect, with close attention to irrigation, Poa annua control and fertility programs. A rain-free warm spell leading up to the tournament enabled Richard and his staff to present the greens in excellent condition. The mowing heights for the tournament were set at 3mm for the greens, 7mm for the aprons and 11mm for the fairways, with greens running between 12 and 13 on the stimp meter.

In setting up the course careful attention was given to pin placements in an attempt to present the course in a user-friendly manner. This was important especially given that all players were amateurs and that the standard of player varied considerably between countries. Golf is relatively new to some of the competing countries, whereas Australia is a mature golfing nation that has consistently produced world-class players such as Peter Thomson, Greg Norman and Adam Scott. The Australian participants had a considerable advantage having been brought up on hard-and-fast bent greens. Slower warm season grasses are more the norm in the Asian countries. Access to golf is very limited in some emerging countries. For example, in Bangladesh there only 11 courses for a population of 152 million people whilst Melbourne, a city of 4.5 million, boasts more than 100 courses.

The scores varied throughout the tournament and especially on Day One when many golfers struggled to come to grips with severe winds and Royal Melbourne’s fast, sloping greens. The cut after Day 2 was 10 over with the eventual winner Antonio Murdaca shooting an impressive 13 under.

In 2015 the Asia Pacific Amateur Championship moves to Hong Kong and will be played at the spectacular Clearwater Bay Golf Club, also in October. A strong contingent of officials from Clearwater Bay was in attendance at Royal Melbourne to ensure a smooth handover of the event. Clearwater Bay Course Superintendent Darry Koster took the opportunity to spend some quality time with Royal Melbourne’s Richard Forsyth, to share ideas on course preparation and presentation. Darry believes October is a perfect time to host a tournament in Hong Kong and is confident the course will be at its best.

The grassing regime at Clearwater Bay is very different to Royal Melbourne. The greens are planted with Tifeagle, an ultra-dwarf bermuda grass and the fairways are planted with Zoysia matrella. Similar green speeds can be achieved with theses grasses but considerably more inputs will be required especially to prevent fungal diseases that can quickly develop in the hot and moist sub-tropical climate of Hong Kong. A key consideration will be the wind which usually peaks in October. Many greens at Clearwater Bay are located on the edge of steep cliffs which exacerbates the exposure to wind. Darry will restrict the ball speed to around 11 on the stimp meter in order to prevent stationary balls roll moving in the wind. The changing wind will also affect the putting lines on these exposed greens.

Having undergone a major renovation some 8 -10 years ago, the golf club has been on a path of constant improvement ever since. The management at Clearwater Bay has made a number of changes to the course to better position the course for international events. Thomson Perrett, Golf Course Architects were engaged to oversee the changes over a two-year period which involved the construction of some new tees on holes 1, 3, 4, 6 and 17; new bunkers on holes 3, 7 and 17; modifications to greens on holes 3, 4, 6, 7, 9, 11, 13 and 16; with the construction of a new Driving Range and short- game practice area. The 6th green was altered at the front to eliminate a false front and to create some challenging pin placements. An additional greenside bunker was added to toughen up the 7th hole, a driveable short par-4. The mowing heights around the green were reduced to allow balls to roll back into the bunkers and the lake, should the green be missed from the tee.

The most significant work was the redesign and construction of a new 9th green complex and the construction of a Driving Range for use during tournaments. The previous green was difficult to see and lacked sufficient pin placements suitable for six days of tournament practice and play. The new green was raised and extended to the right and has a completely new look. The new Driving Range utilises the land normally used as a dedicated nine-hole executive course located adjacent to the Country Club sporting facilities that are separate from the Golf Club.

The Asia Pacific Amateur Championship is now regarded as one of the world’s premier amateur events and it will continue to grow in status whilst quality courses like Royal Melbourne Golf Club and Clearwater Bay Golf Club are selected as venues. It will also showcase how quality golf courses can be created in diverse environments and climates. As golf continues to grow in the emerging markets of the Asia- Pacific area we can expect to see new venues created to cater for the inevitable growth in golf’s popularity in the region. 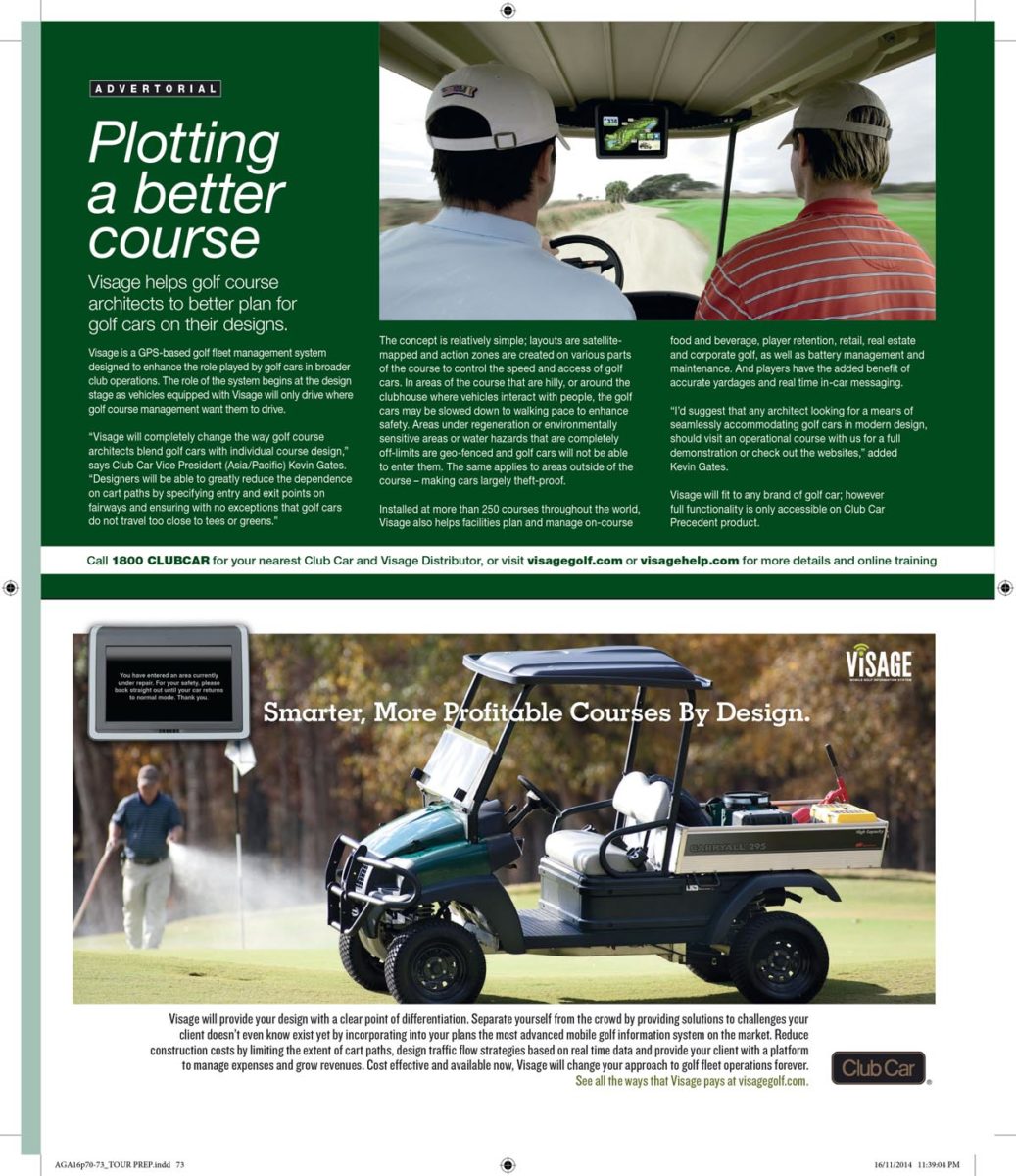