Into The Black: Mountain majesty in Thailand

When we first looked over the land at Black Mountain Golf Course it was obvious the significant rock face on the mountain at the rear of the project was always destined to dominate the first impressions of those coming to the site. – Phil Ryan

This was one of those sites that golf architects get very rarely. There was good movement over the land, isolated large trees sitting within a pineapple plantation, rock-faced creeks coming across the site from the mountains – and a single client that, once the budget and site master plan was agreed, gave us a relatively free hand with the design. 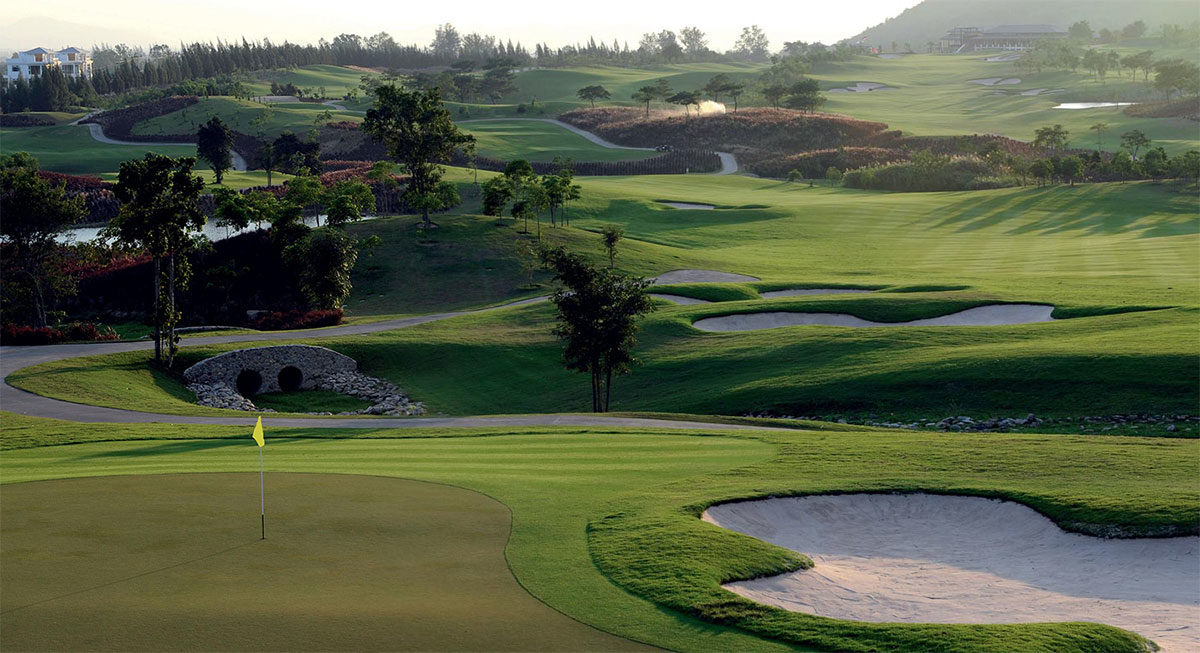 JOURNEY HOME: A natural valley allows hole 18 to wind its way up to the clubhouse – Into The Black: Mountain majesty in Thailand – Issue 14 – Phil Ryan

It also helped that there were at least five natural sites for green complexes: green 2 that was an existing quarry; hole 5 with a magnificent tree which framed a natural depression at the base of the mountain; hole 6, a downhill par-5 where the green sits spectacularly on a natural inlet within an existing lake (a great risk-and-reward shot); hole 16 which has a unique vertical rock feature about three metres high (the green sits next to this); and finally hole 18 which runs along a natural valley to where the clubhouse was sited. 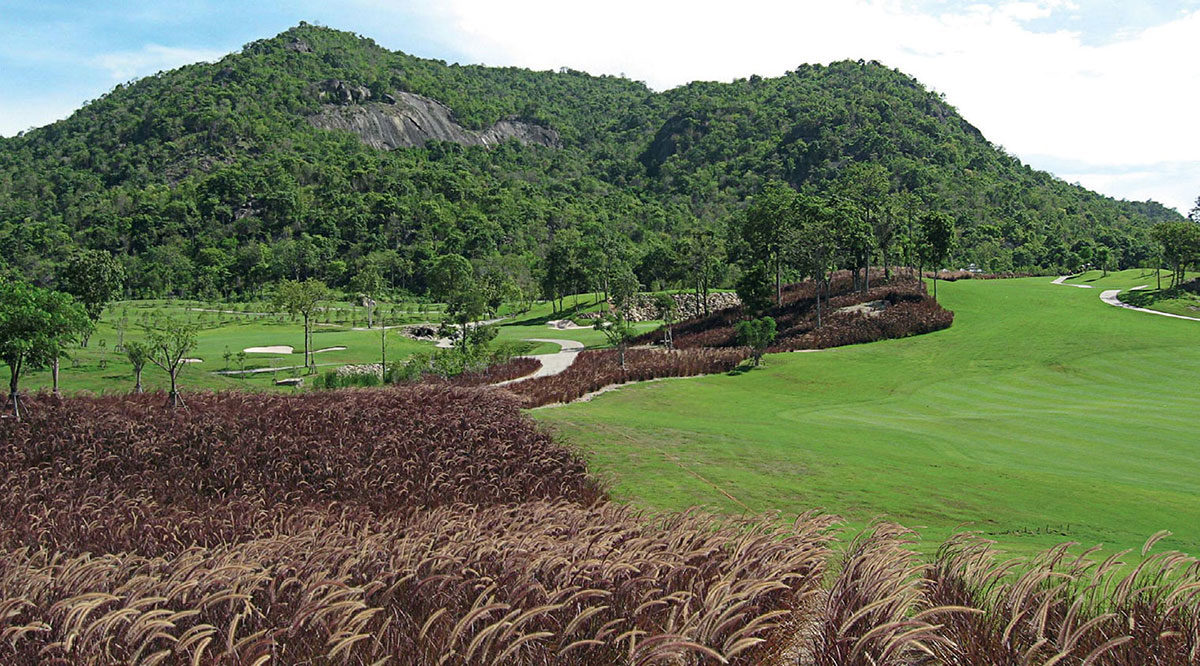 CONTRAST: The Black Mountain in the background dominates the golf course and the red grass landscape is brilliant against the green grass – Into The Black: Mountain majesty in Thailand – Issue 14 – Phil Ryan

Hole 6 would have to be a favourite – as per the previous comments this was a natural hole when we first visited and stayed through every concept. It is a downhill par-5 of 545 metres (596 yards) with good elevation on the tees. The landing zone for most average male golfers is between 210 and 230 metres but with the downhill tee shot and depending on what tee you choose, a good drive close to the fairway bunkers can reach the zone where the hill steepens and some good run can be achieved. So a good drive will find the golfer about 15 metres higher than the green with a clear view and the option of taking on the water surrounding the green with a good fairway wood.

While we worked hard to protect, keep and plant more of the existing trees on site, the views across the undulating valleys were magnificent so we looked for something when landscaping that would not block but enhance such views. We had been working with ornamental grasses for some time in India and China and found in Thailand a red version of Pennisetum grass and this became the foundation for the golf landscape.

At first the client was a bit reluctant but once he saw the first results he was actually keen on planting much more than originally planned, as it was simply stunning and attracted immediate notice from golfers and magazines around Asia.

I suppose the highest form of flattery is being copied, so we were not surprised when a few years after Black Mountain opened we began to see the red grass appearing on many golf courses around Thailand.

PCD was fortunate during construction to have Gavan Wilson, MD of Links Golf Services (Thailand) as the Site Supervisor. Gavan, although Australian, has been in Thailand for more than 20 years and he speaks fluent Thai. Fellow Links Director Richard Halls was also involved in the construction shaping, alongside of PCD’s own shaper Praphan Phaison (Pun) who has been a full-time employee of the PCD team for more than six years now.

The 18-hole BM Course is a par 72 of 7,420 yards but has at least four tees on each hole so playing the golf course can vary greatly from day to day. This variety is further tested with a wind that often moves around during the day, coming in from different parts of the valley and influenced by the nearby ocean.

There are 77 bunkers on the course and we spent a lot of time getting both the base construction and bunker sand playability right. We tested six different bunker lining materials, as the high rainfall during monsoon had the potential to consistently damage the bunker faces that were so important to both the look and strategy of the holes. Other drainage programs (surface and subsurface) leading into the natural lakes and creeks combine to allow the golf course to be open year-round, while other nearby courses often close for business.

The championship 18 holes, Golf Academy and club opened in 2007 and within a few short years had built a strong reputation. Black Mountain is now considered Thailand’s number one golf course, has held two major championships (Royal Trophy in 2010) with many other awards, culminating in being selected among Golf Digest’s top 100 (outside of the USA) in early 2012.

*Black Mountain Golf Course is situated near the seaside town of Hua Hin, Thailand about 2.5 hours south of the capital Bangkok. Site planners and golf course architects, Pacific Coast Design carried out the planning and design for the resort during 2005 with construction commencing in 2006. It remains today as a public-access resort golf course.