What a BALL S-UP!
Will the game’s custodians ever see sense and act to reduce the distance the modern golf ball flies?

The tipping point for me came when the R&A, aided and abetted by a compliant St Andrews Links Trust, started messing about with the Old Course. Suddenly deemed an inadequate challenge for modern professionals armed with turbo-charged balls and over-sized “frying pan” drivers, golf’s ultimate monument joined so many of the game’s best courses in being teased, tweaked and, yes, defaced. – SAGCA Magazine

Inappropriate bunkers were added. Slopes were redefined. A green – the 11th – was radically altered. And, to many observers, the inherent character of the course was changed forever. All because the game’s ‘custodians’ have been outsmarted and outmaneuvered by the boffins in the employ of the leading equipment manufacturers.

So it is that, over the past two decades or so, on a piece of links land that should be an untouchable tribute to all that is good and great about the game Scotland gave to the world, Open Championships at St Andrews have been played from a number of tees out-with the boundaries of golf’s most famous venue.

Perhaps the saddest aspect of such nonsense is that it came as no real surprise to any close observer of golf and golfers. Stretching courses to – and often beyond – breaking point has long been the most obvious symptom of a trend that has wrought havoc amongst so many of our game’s most iconic courses. Watching the Senior British Open at Sunningdale’s Old course earlier this year I was moved to ask: “What other sport would allow so many of its best tournament sites to become obsolete?” The answer, surely, is: “None!” The level of incompetence displayed by the United States Golf Association and the R&A in the realm of equipment regulation has been nothing short of staggering.

The end result – especially on the professional circuits – has been longer and longer holes and, much more disturbingly, more and more perversion of the course architect’s original intent. Faced with players who now routinely drive the ball in excess of 350 yards, the various Tours have routinely sought refuge in longer rough, narrower fairways, faster greens and more and more severe (or ridiculous) pin positions. All to keep scores within what most sane observers would deem an acceptable range.

“Everyone loves the old courses like Augusta National, Royal Melbourne and Cypress Point because they epitomise what Bobby Jones said and what Alister MacKenzie wrote: they give people space to play,” says Melbourne-based former European Tour player Mike Clayton, now a much-respected course designer and SAGCA member. “Everyone adored Seve Ballesteros and the way he played. But not so many seem to understand that he could play like that only when the course gave him the freedom to do so. He’s the only guy who ever won on two of MacKenzie’s best courses – Augusta National and Royal Melbourne – and his favourite course, the Old Course at St Andrews,” notes Clayton. “No-one else ever did that. He is the only guy who has won on the three best courses that pro golf goes to with any regularity.

“MacKenzie loved the Old Course and he designed his courses to have the same principles. He gave people freedom and space to play. He let them think for themselves. Yet the Tours do the exact opposite. Because the players don’t want that. They want equity of punishment. They want to be rewarded for straight driving rather than accurate driving. And they want ‘fairness’ and predictability. So you get the same conditions every week,” Clayton laments.

Such an approach is nothing short of madness. Asked to negotiate holes set up in the aforementioned manner, every pro is essentially “told” how to play each one. Any semblance of decision-making or strategy is removed from the equation. All the player has to do is “kick field goals” between hazards.

This trend is little more than a cop-out by those charged with course set-ups. Dictating to players is the easiest thing to do, particularly very good players. They love to play holes that tell them exactly what to do, so all that is left is “hit between this and this”. Technically, they can do that over and over. When there is mystery involved, the decision-making process becomes part of the challenge.

“In 1999 when Payne Stewart won the US Open at Pinehurst No. 2, the fairways were narrowed,” says leading architect Bill Coore, who works in partnership with two-time Masters champion Ben Crenshaw. “Then in 2005, Michael Campbell’s year, they got narrower still.

“That followed the general perception that width makes golf too easy. But all it does is make the game more interesting. A lot of the problem is television, where people watch the same courses over and over. They watch professional golfers being asked the same question time after time. They hear commentators talking about the “premium” on driving the ball in the fairway. So the perception grows that hitting to those narrow spots is what the game should be. But it is the most uninteresting golf to watch, and to play.”

One in accord with that point of view is former US Open champion Geoff Ogilvy. One year before he would claim the title at Winged Foot, the Australian finished in a tie for 28th, 11 shots behind Campbell at Pinehurst.

On tee after tee, Ogilvy would eye the perfect location for his drive, from where he would be afforded the ideal angle into architect Donald Ross’ invariably sharply sloping and hump-backed greens. But those spots were rendered unavailable by the United States Golf Association’s close-minded adherence to the aforementioned point-missing theory that golf at the highest level should be a one-dimensional test of technical execution rather than one where thoughtful strategy and occasional risk-taking might pay dividends. Covered in long grass, the places to be were instead “no-go” areas.

“The worst part was not being able to play the course as it had so obviously been designed by Ross,” says Ogilvy. “Endlessly being told where to hit my drives got old pretty quickly.”

Inevitably and inexorably, attitudes prevalent at the professional level have seeped down to “ordinary” golf clubs. Rare is the member who feels that his course should get shorter for any reason. An architect can suggest putting back tees in all day long, but taking one out? It’s “how can you ever think about doing that?”. 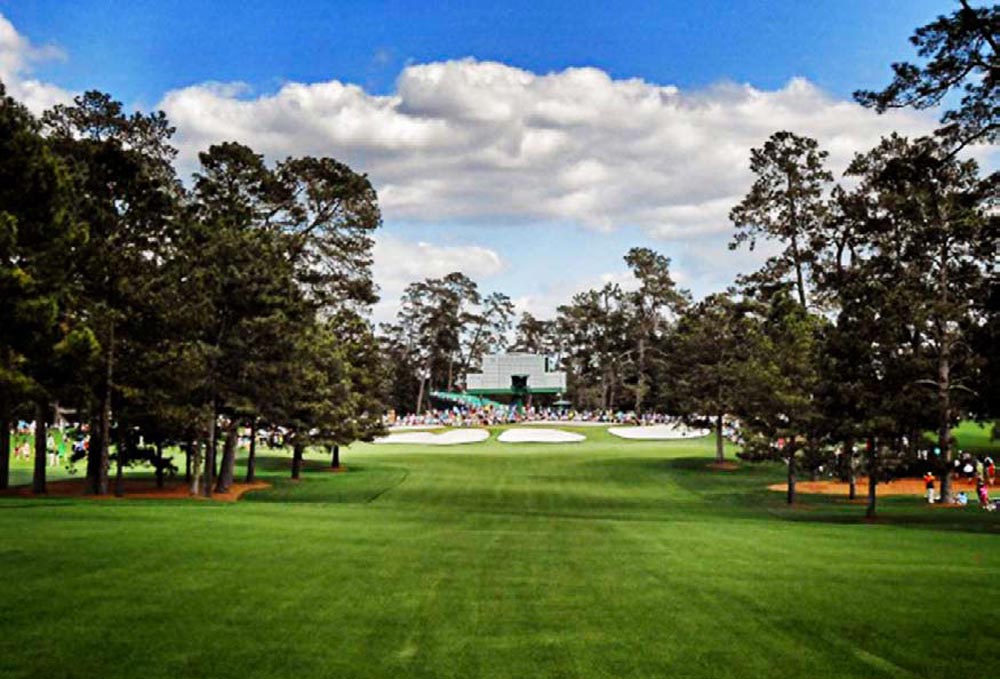 “Making things wider or taking out trees is often a difficult step for clubs,” acknowledges leading architect Tom Doak, whose work includes Barnbougle Dunes in Tasmania and Pacific Dunes in Oregon, USA. “The question we always get asked is, ‘won’t that make things easier?’ As if that would be the worst sin in the world. They are afraid that someone will think they are trying to make it easier. That’s where most resistance comes from. They don’t want anyone to think they are trying to make the course easier for themselves.

“We just want the course to be interesting and for people to have fun playing it. The ‘easier versus harder’ debate has a lot of trade-offs. When rough is eliminated, the ball is still in the fairway but it has run further off line than it did before. So you have a tougher angle to the green. Where the ball used to stop in the long grass, now the punishment – a tougher angle for the approach shot – is subtler and more thought provoking.”

There is an easy solution, as so many have pointed out over the last two decades or so: “fix” the ball, by knocking as much as 50 yards off the distance a top player can hit it with his ‘frying pan’. It seems such a simple thing to do. But somehow or other – perhaps cowed by an implicit threat of legal action by the equipment manufacturers – the R&A and USGA continue to find ways to not make it happen.

“To me, the cart is in front of the horse,” sighs Coore. “Why are we changing so many courses for the sake of the golf ball? Why not just change the ball? There is no doubt it has had a negative effect on architecture generally. Guys just hit past stuff so much these days. To which people say we can move tees back – but sometimes you can’t – or move bunkers. But sometimes that isn’t practical or advisable. I hate to see bunkers that have been there for decades suddenly moved. For one thing, rebuilding a bunker exactly as it was isn’t that easy.”

The enduring tragedy is that too much of the golf people are asked to play and watch is inherently dull, a state of affairs that must have something to do with the decline in participation golf has so far endured in the 21st century.

“I’m not sure there are many people in powerful positions who fully appreciate how much more interesting golf is when it is played on a great course,” says Ogilvy. “I’m not sure they realise how much better their leaderboards would be either. If the Tour went to St Andrews, Augusta National, Royal Melbourne, Cypress Point, Shinnecock Hills, Chicago Golf Club and Merion, the finishing order every week would closely resemble the world rankings.

“But if you go to courses that take away the advantages enjoyed by the truly great players – superior shot-making, imagination, strategy, flair – and bring them back to the pack, you get dodgy winners, odd results and strange leader boards.”

Indeed, there is much anecdotal evidence that short grass is golf’s most subtle and interesting hazard.

“My mind goes back to the playoff for the 1989 Open Championship at Royal Troon,” says architect Gil Hanse, designer of the course on which the Olympic golf tournament will be played in Rio de Janeiro next year. “Greg Norman had missed a green but had nothing but short grass and a bank between him and the hole.

“He stood there and thought about it. Then he switched clubs. Then he thought about it more. Eventually, he chunked the shot. The best player in the world at the time had been perplexed by the subtlety of what was in front of him. His mind was full of doubt. And that, given the distances they can hit the ball these days, is just about the only way we can mess with a really good professional.”

All is not lost, however. In contrast with the dark days of the 1950s and 1960s, many new and great courses have been built since the turn of the century. Faced with a lull in the amount of work coming their way, many architects have been forced to specialise in their work, focusing on only one or two projects at a time. “It is very competitive,” agrees Doak.

“If someone wants to do something that really stands out, they know they have to find a great piece of land to do it on.”

All of which is good to hear. But, in the meantime, can we please fi x the ball? Then we can get back to playing golf as it was meant to be played, on courses designed to encourage that ideal.