Decade in the making – ‘Labuan of Love’ in Malaysia

Labuan, near Sabah off the coast of Malaysia, has links to Australia through war and peace, with golf now an enduring tie.

Labuan Island lies eight kilometres off the coast of Borneo adjacent to the Malaysian State of Sabah. From the 15th century until the mid-19th century, the island was part of the Sultanate of Brunei. In 1848, the island became a British Crown Colony and remained so until, from December 1941 until June 1945, Labuan was occupied by Japan and governed as part of the Northern Borneo Military Unit by the Japanese 37th Army. – Ted Parslow 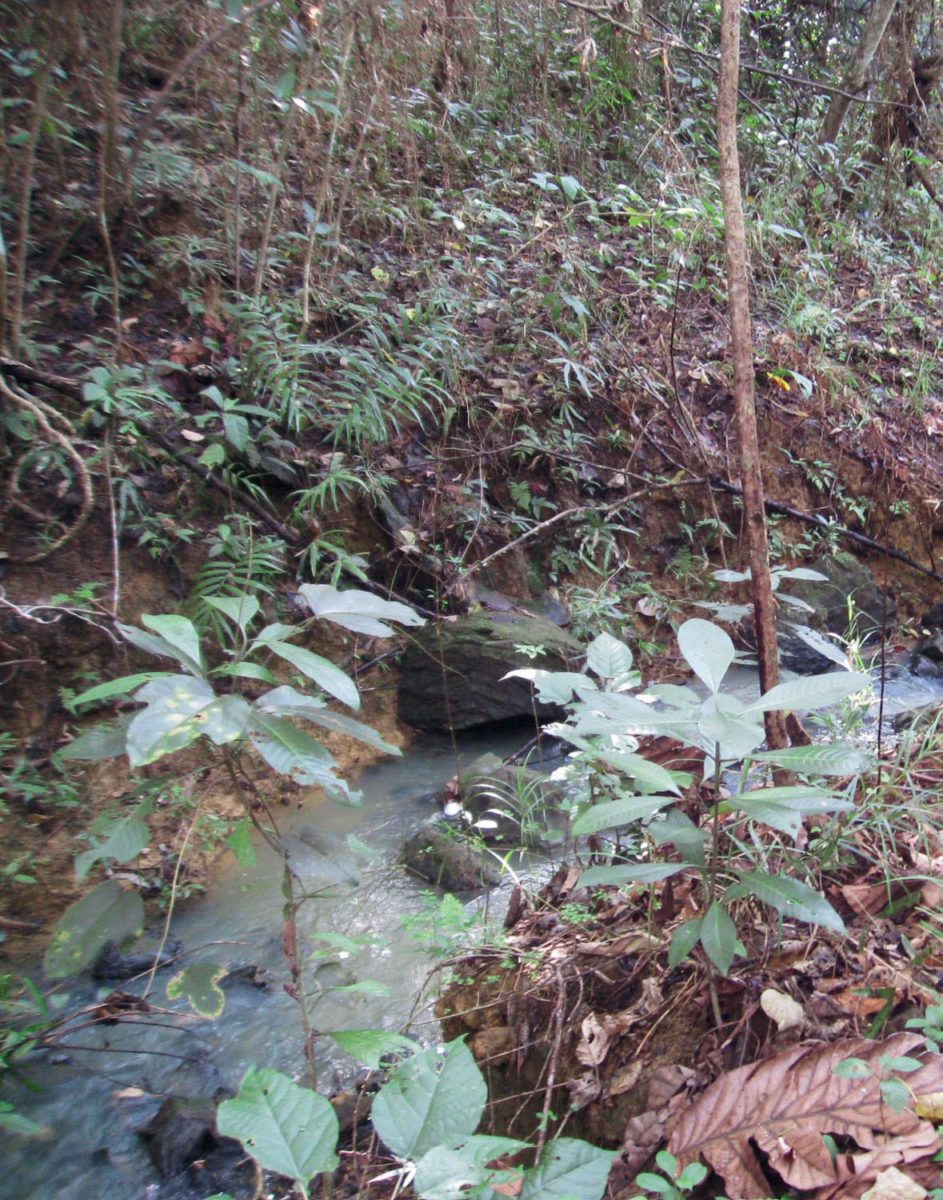 Centreline survey inspection through the lush jungle. :1 – Decade in the making – ‘Labuan of Love’ in Malaysia – Issue 16 – Ted Parslow

The liberation of Borneo, including Labuan, by the allied forces began on 10th June 1945 when the Australian Army, under the command of Australian Major General, George Wootten launched an attack. Labuan became the main objective for repossession and within four days, most of the Labuan island area was under the control of the Allied Forces. However, the majority of Labuan’s Buildings were reduced to ruins durings the heavy bombardment from the sea and from the air. Port Victoria was completely devastated, and later the Australians built an entirely new wharf for Labuan, known as Liberty Wharf. 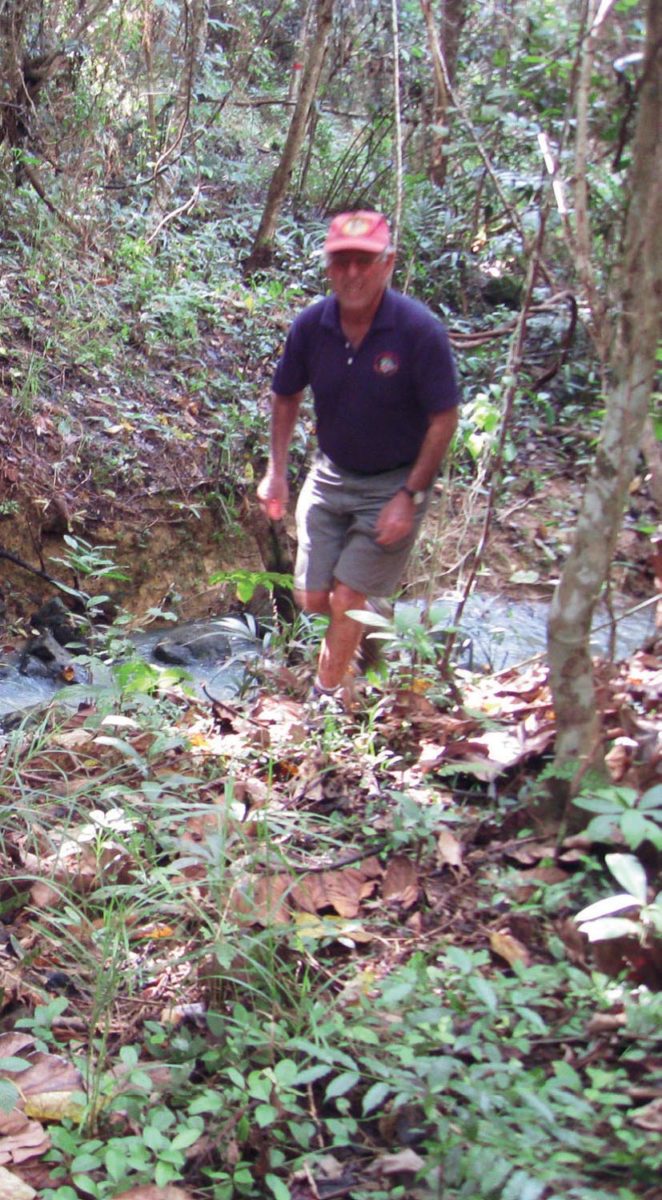 Centreline survey inspection through the lush jungle. :2 – Decade in the making – ‘Labuan of Love’ in Malaysia – Issue 16 – Ted Parslow 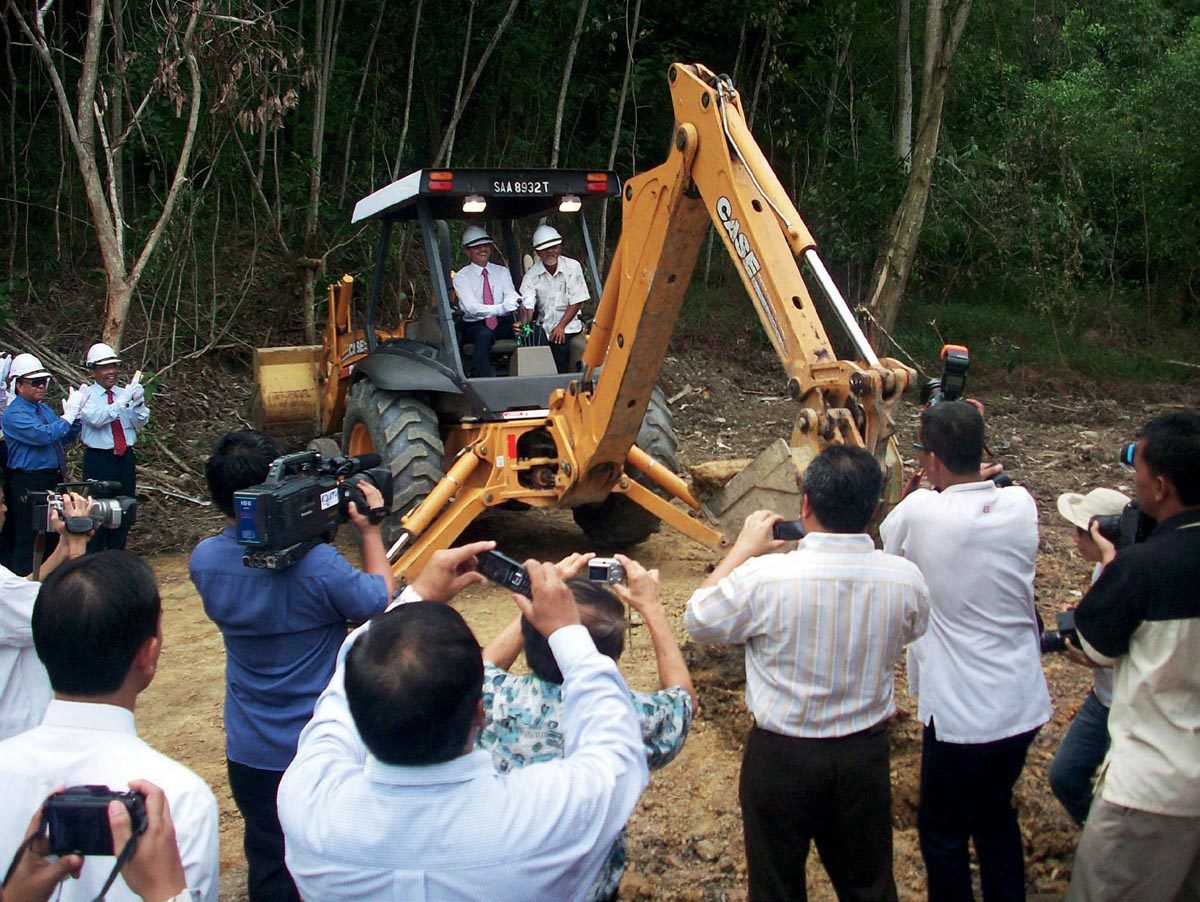 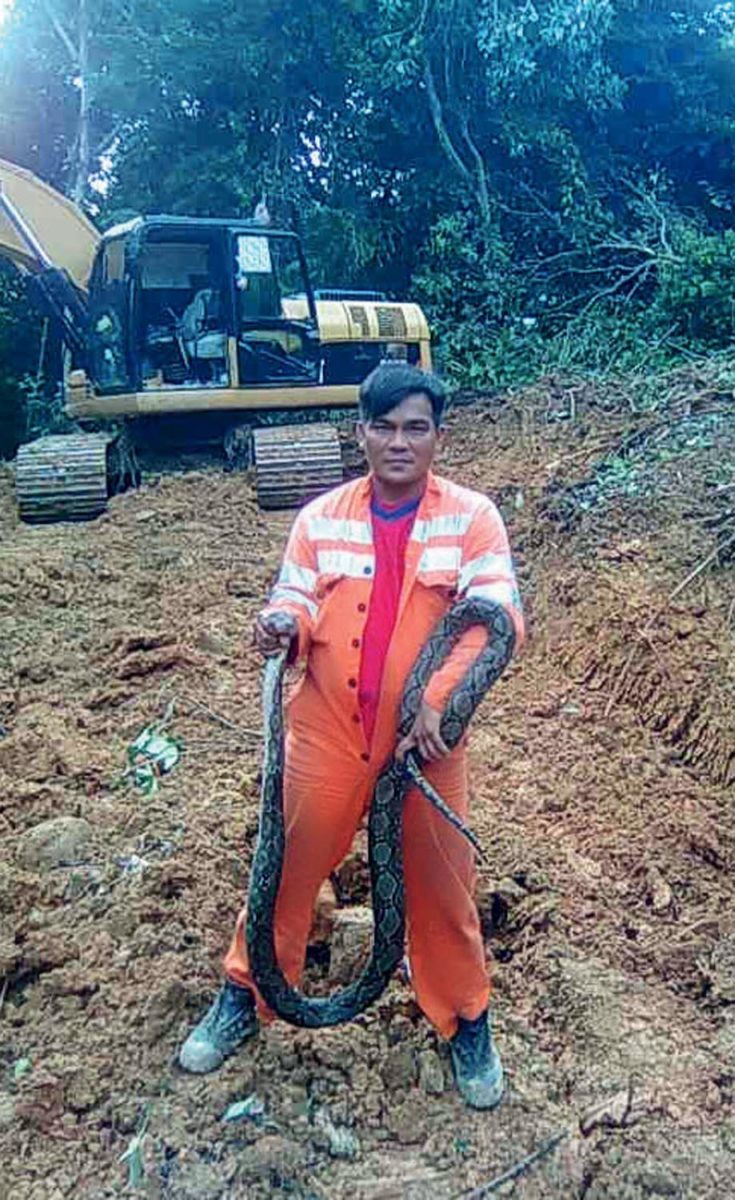 A non-plussed excavator operator pauses to remove a python from his path! – Decade in the making – ‘Labuan of Love’ in Malaysia – Issue 16 – Ted Parslow

Labuan joined the North Borneo Crown Colony on 15th July 1946, which in turn became a part of the state of Sabah and Malaysia in 1963. In 1984, the Government of Sabah ceded Labuan to the Federal Government. It was declared an international off-shore financial centre and free-trade zone in 1990.

Apart from the liberation of the island in 1945, Australia is forever linked to Labuan through the beautifully maintained war cemetery which commemorates by name, among soldiers of many other nationalities, the large numbers of Australians killed during the infamous Sandakan Death Marches.

Labuan Today
Labuan’s population of just over 90,000 is a wide ethnic mix of local and non-Malaysian citizens. The economy relies largely on vast oil and gas resources and international investment and banking services. Labuan’s economy continues to grow but the Government has foreseen the need to develop tourist and leisure facilities on the island, both to attract more business and tourists, and to provide lifestyle options for locals and the large numbers of expatriates working particularly in the oil and gas industry.

Labuan International GC
From the late 1990s onwards, the Labuan Authorities began looking for a suitable development partner to design and build a good quality golf course on a hilly, densely vegetated piece of land near the south western tip of the island.

Over 10 years ago, we were asked by a number of potential developer/ contractors to undertake golf design for them but none of their submissions came to fruition. Finally, in 2008, our submission in assistance to a Kuala Lumpur-based Golf Course Maintenance and Management Company began to show signs of getting somewhere.

Ground-breaking Ceremony – 12 October 2010
Early concepts required the inclusion of a future residential development centrally within the site on relatively high and even ground. We responded to that constraint which enforced the location of several holes within exceptionally steep and rugged terrain. Soon after the surveyor pegged out greens, tees and fairway turning points relating to this concept, we walked (actually “jungle-bashed”) the site to better understand the locations and feasibility of the holes as proposed.

As expected, the several extremely difficult-to-construct holes were indeed that, and construction costs for this layout would certainly blow the relatively limited but strictly defined budget. After many discussions, the central residential area idea was withdrawn and we were able to incorporate this land into what was a far more sensible, economic and practical use of the land for the golf course.

Detailed design proceeded and the new centrelines were pegged. The contractor cleared a three-metre-wide path down centrelines to allow us to walk the proposed playlines (although still with some difficultly).

The limited number of quality trees were marked for preservation where at all possible and the location of beautiful nibong palm clumps noted. Slight changes to routing enabled the best balance between natural topography, quality tree and palm clump retention and sensible golf course requirements to be achieved.

As with almost all island situations, construction of the golf course in Labuan was more difficult than could normally be expected. Items like sand delivery by barge, inadequate available quantities whenever required of gravel, cement, concrete and steel reinforcement caused constant delays, as did the red tape enforced at the only point of entry.

Finally, however, the course was built, grown in and opened for play in April 2013. With jungle having been retained alongside most holes, we were worried that the degree of difficulty may be too much, particularly for beginner golfers. Once much of the undergrowth was cleared gradually during grow-in and after opening, from jungle areas close to in-play areas, the chance of recovery from an errant shot improved. Whilst the course remains challenging, it is also fair and has received favourable reports from media and players alike, particularly after hosting the Sabah Amateur Open Tournament in May 2014.

Some holes typical of the layout are:

Hole 1, Par-4, Index 9 (313m)
This short par-4 plays from elevated tees to a fairway perched above the main lake on the right. Spectacular views will distract the golfer from the task at hand, which is simply to make the fairway, as an approach to the well-guarded green from anywhere else will be difficult.

Driver is not really an option as the fairway narrows after 230m and drops between the fairway bunker and the lake. The sensible play is to the centre of the fairway from where the green is easily reachable with a short iron.

The green sits above a rock wall with the lake along the entire right side of the green. A large bunker lines the left side of the green, from where recovery shots will be daunting with the pond beyond. The green is quite gentle, rewarding a well-placed approach with a straightforward putt.

Hole 5, Par-3, Index 17 (155m)
This medium-length par-3 hits straight towards the ocean and the oncoming breeze should be accounted for in club selection, however taking extra club to reach a back hole location must be weighed up against the two deep traps waiting either side of this narrow section of the green. Playing to the much wider front half of the green is a wise choice, leaving a straight uphill putt. The front section of the green falls to either side, or missing the green on the wrong side will leave a difficult up and down

Hole 8, Par-4, Index 5 (409m)
This hole is what handicaps are for; most players should play this long, demanding par-4 as a par-5. If you have not hit your best drive to this generously wide fairway, past the bunker on the left, then a lay-up is advised to your favourite approach distance, well short of the bunker placed 20m before the green. The green is guarded by a bunker centrally at the front, and has steep slopes off to the back and along the right side which can send the ball into surrounding forest, which is close by on the left of the green also. The green is undulating, and approach shots to sections of the green other than where the hole is cut will face challenging putts. Recovery shots from off the green or from either of the bunkers will be particularly difficult.

Hole 9, Par-4, Index 7 (381m)
A daunting-looking fairway target area across a deep valley requires accuracy rather than distance. The fairway is narrow, with a small bunker on the right, but narrows further and drops steeply after 240m meaning longer hitters should lay up with a 3-wood or hybrid for a better chance of hitting the fairway. Drives to the left may be helped back onto the fairway by the high mounds there. The small green, certainly best approached from the fairway, has three distinct hole locations, at the front left and right and the upper tier at the back. Two bunkers guard either side of the rear section, and a third deep bunker sits below the difficult front left section which slopes gently left towards a deep hollow off the edge of the green. The front right is more approachable, with bail-out areas to the right. 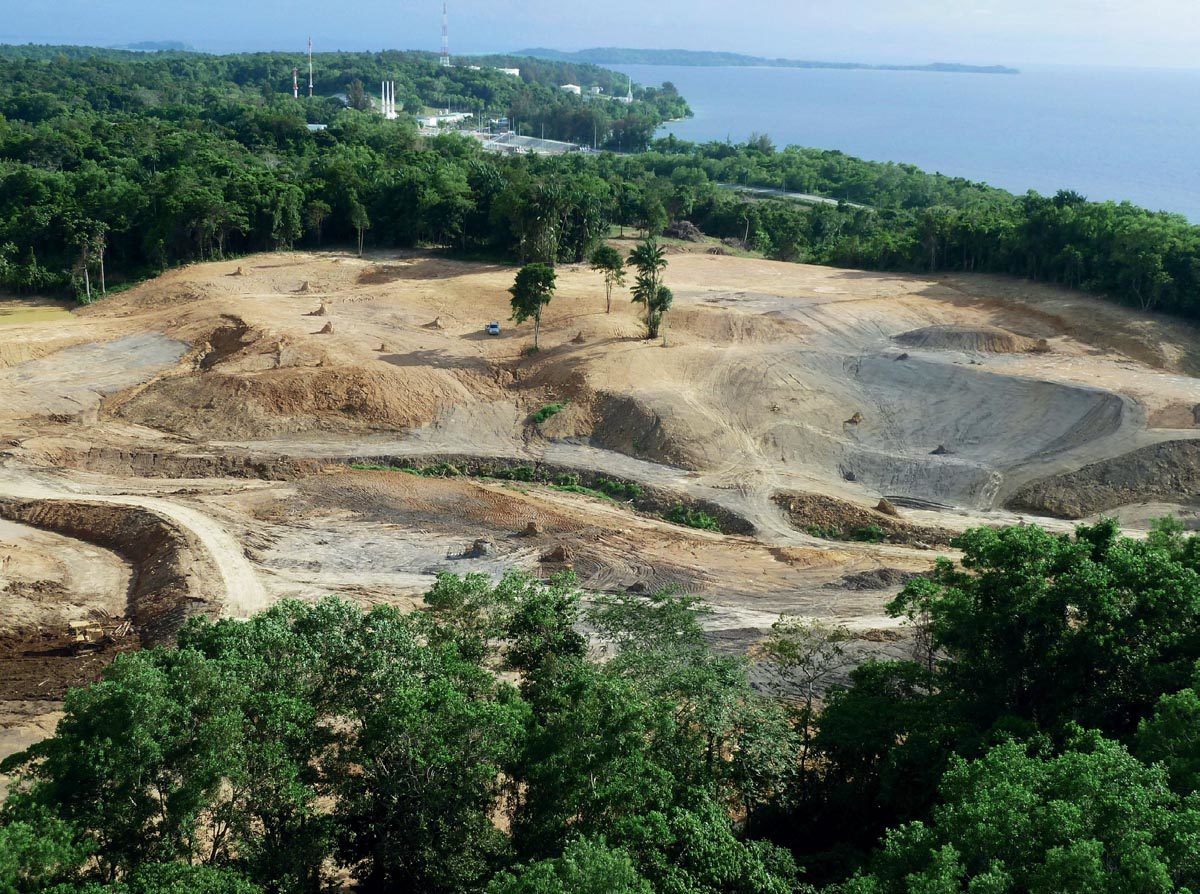 CLEARED: The view of the site of the driving range, clubhouse and 18th hole, taken from the multi-storey university adjacent – Decade in the making – ‘Labuan of Love’ in Malaysia – Issue 16 – Ted Parslow 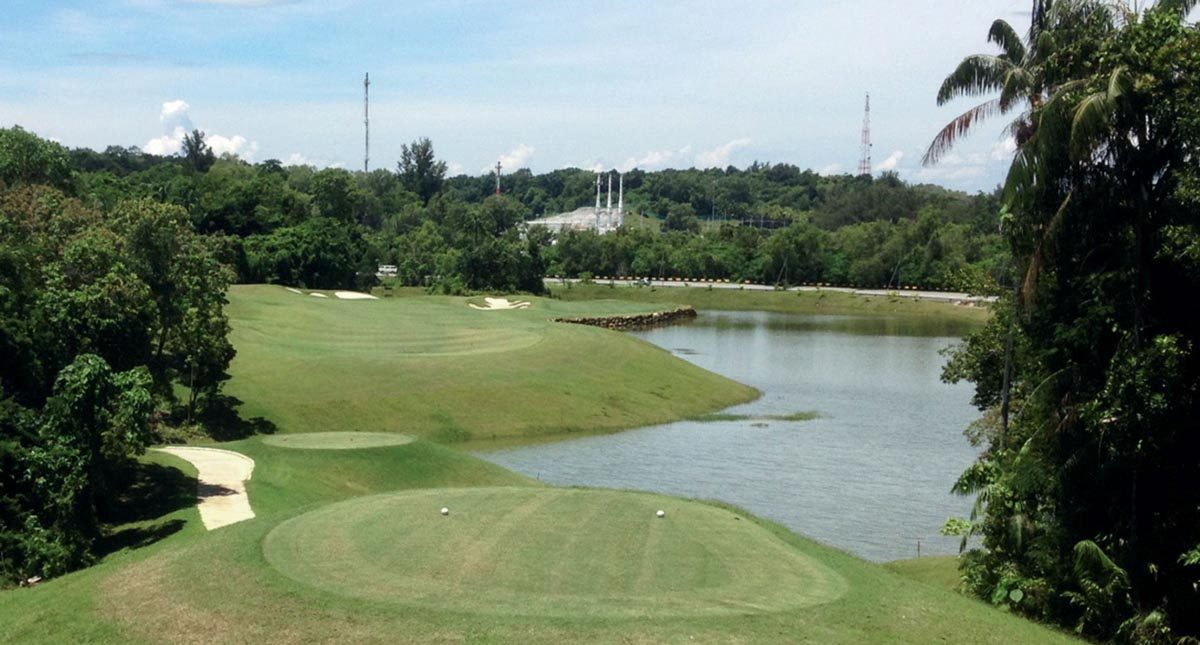 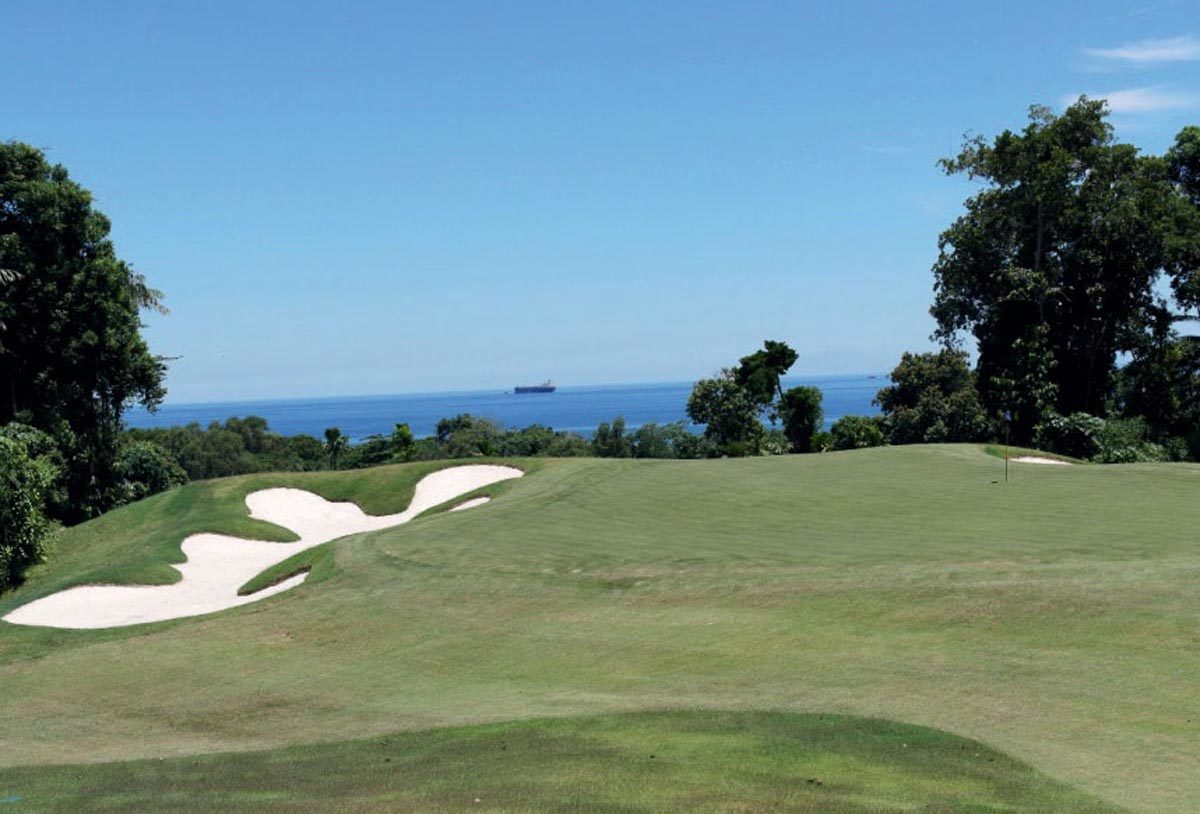 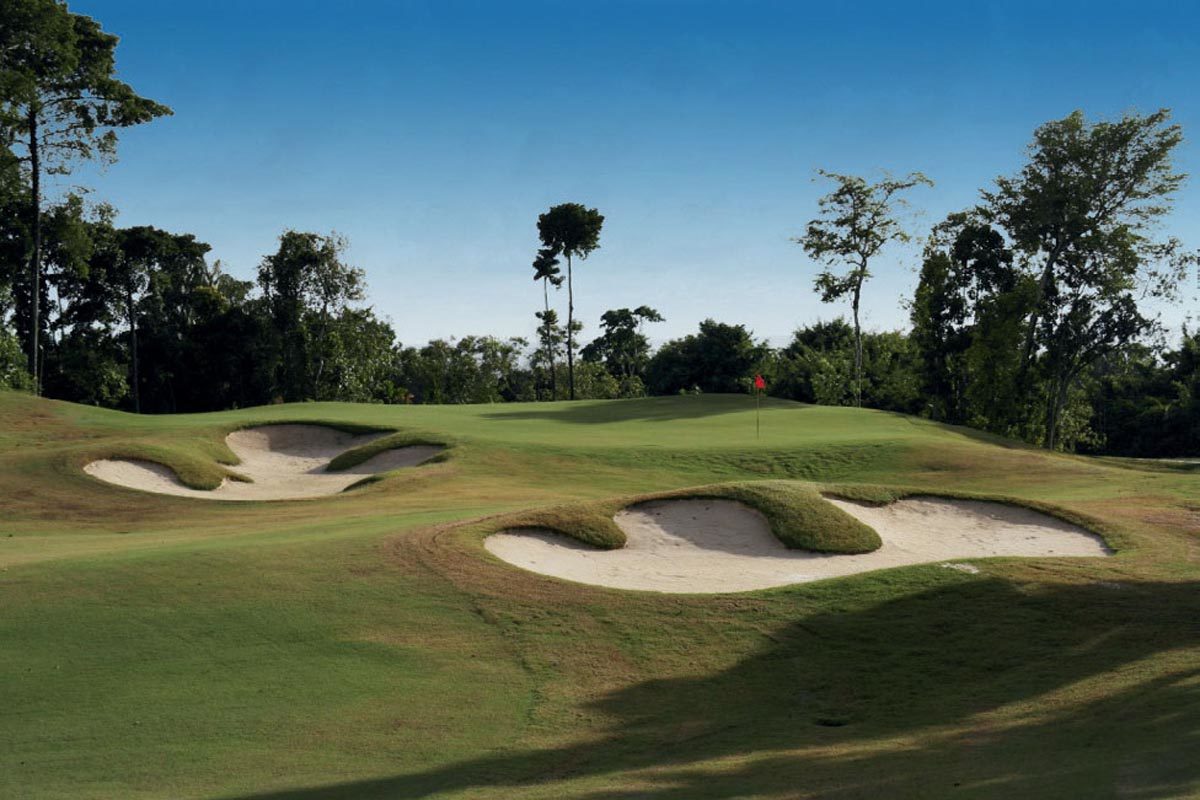 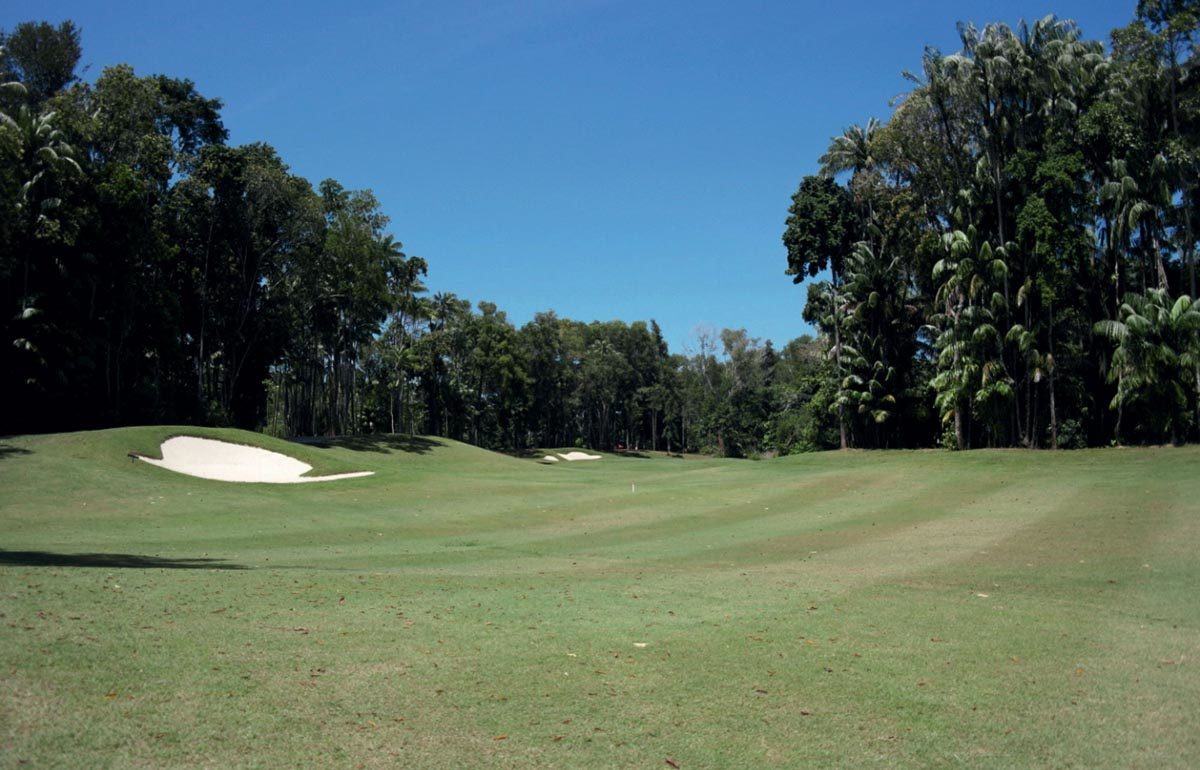 Hole 15, Par-4, Index 8 (323m)
Perhaps the most intimidating driving hole on the course. A deep ravine before the fairway and jungle on the right will impact the senses from the elevated tees. It will require a minimum carry of 175 metres from the Blue tees to make safety onto the fairway. As the hole doglegs right, to have any chance of seeing the green for the approach, the golfer should aim for the fairway bunker 235 metres away on the left. The green is guarded by a bunker on the left but it is the right side sloping steeply down from the putting surface that the golfer should be wary of.

Australians travelling overseas and with Malaysia on their itinerary should certainly consider a side trip to Sabah and Labuan. There are a number of excellent golf courses around Kota Kinabalu in Sabah and certainly Labuan International Golf Course should provide a memorable experience. Even if the score is bad, this should be more than compensated for by the cooling sea breezes, the stunning sea and jungle vistas, and by the general warmth and friendliness of the people of this tropical island. The seafood and duty free beer aren’t too bad either!