MacKenzie’s triumph of minimalism: The Genius of Pasatiempo

Late last year, I had the opportunity to visit some of the great American golf courses that I have read so much about for so many years. There were of course many highlights, but the experience I appreciated most was seeing first-hand Dr Alister MacKenzie’s genius work at his beloved Pasatiempo Golf Club. – Michael Henderson 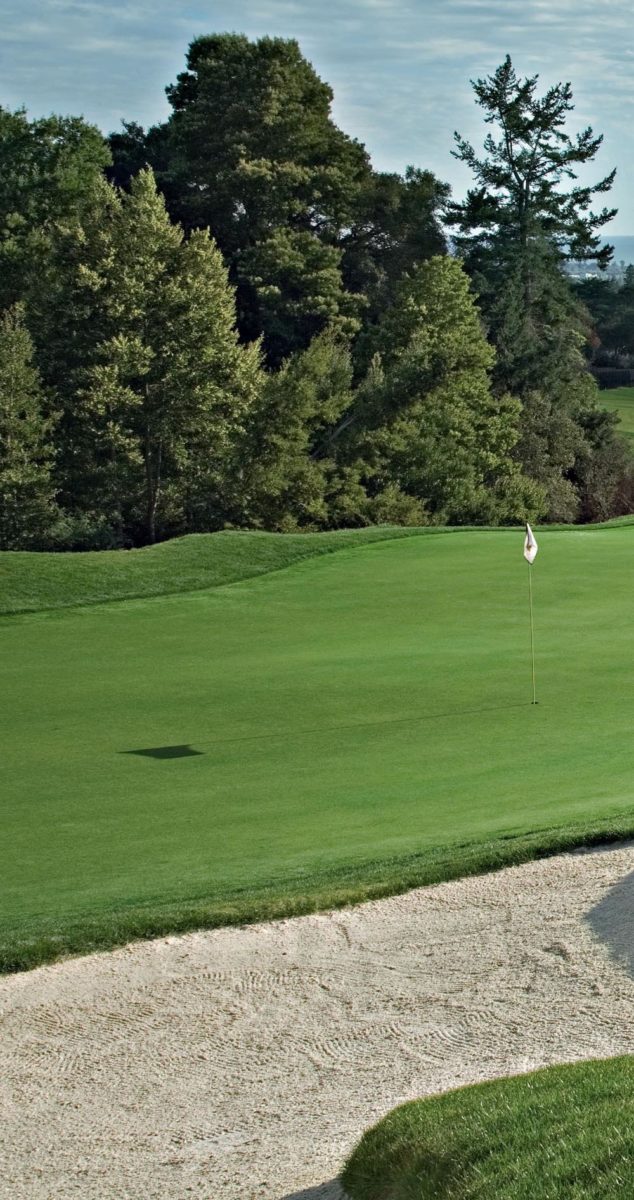 Dr Alister MacKenzie had great success on the west coast of California, designing the famous Cypress Point Club; the Meadow Club; the Valley Club of Montecito; as well as playing a hand in the design of Pebble Beach (to name a few). For all of those great achievements, no course was closer to the Doctor’s heart than Pasatiempo in Santa Cruz, California. MacKenzie would later live on the 6th fairway of the course he designed and laboured over during construction.

Cypress Point represents the pinnacle of beauty and strategic design in golf course architecture, for anyone who is lucky enough to get the chance to see or play it – but Pasatiempo arguably highlights MacKenzie’s genius more so than Cypress Point. Pasatiempo does not enjoy the incredible ocean cliff top, sandy and wooded terrain that Cypress Point does. The land is good, with large natural undulations, a barranca (dry ditch filled with rocks), sandy ravines, and a stream that cuts a swathe through the back nine – but it is the golf course MacKenzie was able to fashion around these features together with the amazing bunkering that makes Pasatiempo so remarkable.

ROUTING
The routing at Pasatiempo is first class. To be able to create the quality of holes around the ravines and creek on the back nine without significant earthmoving is a feat of marvel in itself. Where there weren’t bold features to play with, MacKenzie would use the subtlety of the slope to play a part in the strategy of holes like the tee shot on the 2nd, where the ideal shot is to the hold the higher right side of the fairway. Yet for all the difficulties that the property would have thrown up when routing the course, all of MacKenzie’s principles of golf course design are on full display:

BUNKERING
MacKenzie’s bunkering at Pasatiempo, recently renovated skilfully by architect Tom Doak and his team, is sublime. No architect past or present has framed their green settings with incredible bunkering quite like MacKenzie did. At Pasatiempo, MacKenzie frequently presents the green on an axis to the golfer, with bunkering either side but with one side particularly dominant, to disadvantage the golfer who places their ball on the wrong side of the fairway. 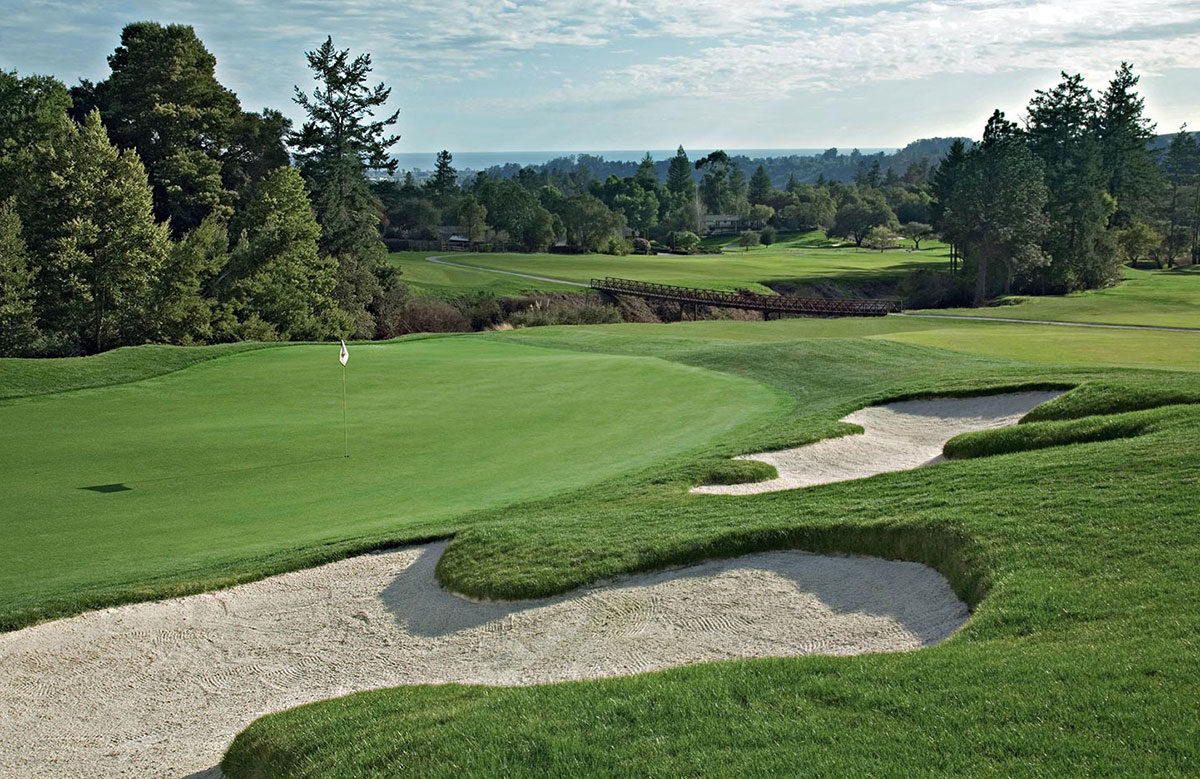 3RD HOLE
The 3rd hole at Pasatiempo is a long par-3 playing uphill along the side of a ridge with a strong left-to-right slope. Most architects would probably consider this to be a difficult and uninspiring piece of land from which to create a hole… but not MacKenzie. Through the use of dramatic and artistic bunkering, the 3rd hole calls for a left-to-right shot into the green that runs parallel to the side of the hill; all of a sudden something remarkable is created from something problematic. – MacKenzie’s triumph of minimalism: The Genius of Pasatiempo – Issue 14 – Michael Henderson

The bunkers are all of varying depths, too. Some bunkers serve to frame the hole and not penalise and hence are very shallow, but add significantly to the visual appeal and beauty of the golf course. There is no need to punish the golfer who finds one of these bunkers by making them unnecessarily deep. The bunker just off the front of the 6th tee is a prime example of a visual bunker that adds to the enjoyment of the round. Overall, the visual impact of the bunkering is awesome and thus complies with MacKenzie’s philosophy of making a shot appear more difficult than what it actually is.

GREENS
On approach to the green, a whole new challenge begins. Despite the array of impressive bunkers framing most green sites, MacKenzie always left an opening to the green for the golfer who plays to the preferred side of the fairway. Running the ball in is always a possibility and in fact is often preferred. The greens at Pasatiempo are among MacKenzie’s best, with large contours tilted to complement the strategy of the hole but also to complicate putting and chipping. They enjoy more movement than the greens at Cypress Point. The beauty of these greens is that the imaginative golfer can use the contours to their advantage from difficult positions, a ploy that brings great interest and shot variety to the short game.

BACK 9
The back nine is slightly different in character to the front. The land is a little more open and dramatic, courtesy of the ravines and the creek. There are many highlights for golfers and architecture enthusiasts on this loop of holes. The 10th opens with a dramatic drive over the barranca, then calls for a right-to-left shaped shot around a heavily bunkered valley short and left of the green.

11th HOLE
The 11th is a great hole and one of the best uphill holes in golf. The barranca runs its way from the right side of the green all the way down to the left side of the tee and splits the hole in two, so golfers have to play over it at some point. The genius of the hole is that length isn’t necessarily paramount; but rather, those who position their tee shot as close as possible to the barranca are left with a far easier approach into the green, which is also protected by bunkering on its right-hand side.

Importantly, the wide fairway is critical to the strategy of this hole. Golfers have the option to bail out to the safer right side of the fairway but they leave themselves an almighty approach to the green. The width also changes the attacking angles into the green significantly, so as to make the left-hand side preferred over the right. During my visit, I watched senior golfers flirt with the edge of the barranca all the way up the fairway, daring to place their ball as close as possible to the hazard in order to give themselves a better chance of clearing it on the next shot; surely the sign of a great hole where the strategic importance of the hazard impacts on golfers of all skill levels. Although measuring only 360 metres, the 11th plays much longer than the scorecard would indicate – another MacKenzie trait.

The 12th hole plays back down the other side of the barranca and calls for a tricky pitch over it to reach the green. The 13th has some of the most remarkable bunkering of any hole on the course. MacKenzie transformed a relatively flat green site into a dramatic one to toughen up the conclusion to this par-5 hole. 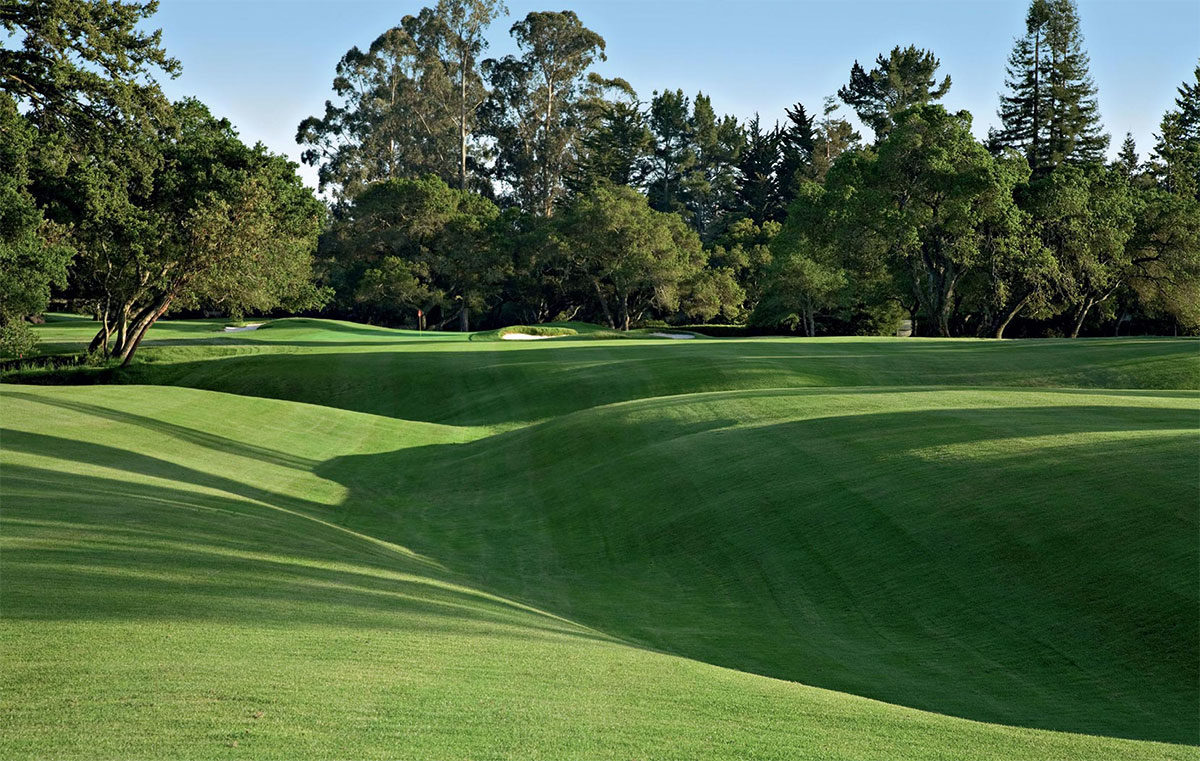 14th HOLE
The 14th hole is another hole that showcases the MacKenzie genius. The fairway is split into sections thanks to a grassed swale that splits the fairway both vertically and horizontally. The tee shot is effectively split in two, with a tight left side and a much broader open right-hand side. Naturally, the smaller and tighter left-side portion of fairway is the best spot from which to approach the green. The green is impressively framed by bunkers which effectively tilt it on a 30-degree axis, so that it favours approaches played from the left of the fairway.

Just over 220 metres from the members’ tee, the swale breaks off and goes from the left side of the fairway to the right. So golfers who drive the ball too far are faced with an awkward approach from the grassed swale or just beyond it. Again, this is an example of the importance MacKenzie placed on accuracy more so than length. From anywhere on the right-hand side of the fairway, the approach into the green is infinitely harder than from the left.

The planned removal of trees down the left-hand side of the hole will further enhance the strategic values of this great golf hole.

The 15th hole is another great par-3 in what is an incredible set of five par-3 holes. 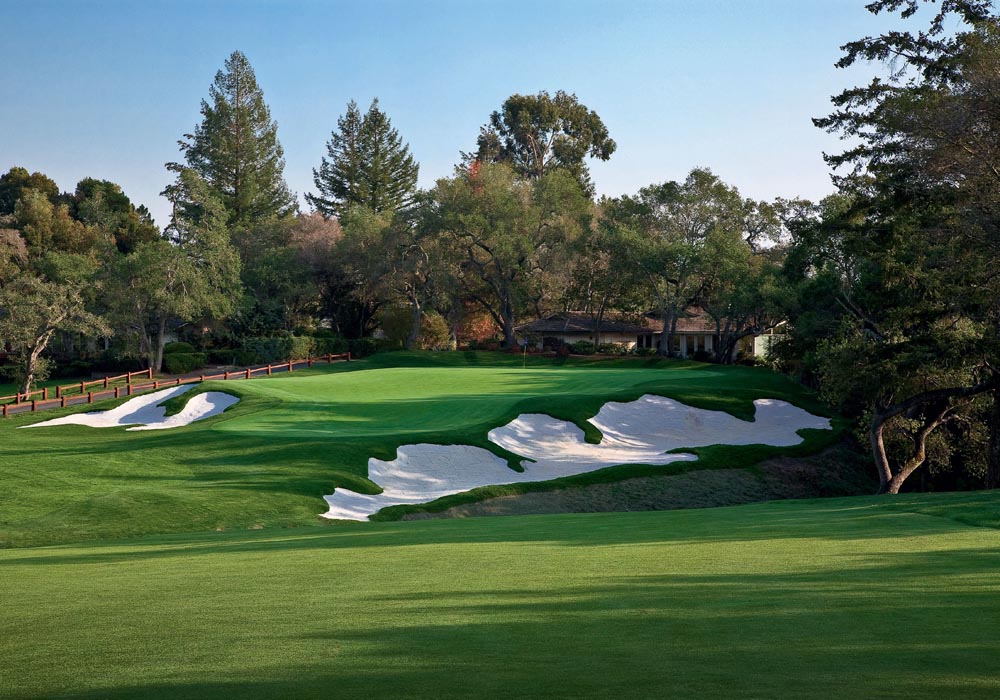 16th HOLE
The 16th is on record as being one of MacKenzie’s favourite golf holes. The drive is semi-blind over a humpback-shaped fairway. The left side tilts down towards the creek and the right side tilts the other way towards the property boundary. The hole is dominated by the dramatic multi-tiered green and its incredible right-side bunker. The green is tilted to favour play from the left and drops an astonishing amount from back to front! It is positioned just over a ravine and the enormous right-side bunker that grows out of the ravine is an awesome site in itself and may just be the most dramatic bunker in golf.

The round finishes fittingly with a par-3 played over the barranca, which from it sprout some more impressive bunkers.

MORE…
There are many other highlights of the course that deserve thorough review. The course has a great collection of par-3s and other holes not discussed in depth here, like the 4th, 8th, 10th and the 12th – all of which are great golf holes.

To be able to create the quality of holes around the ravines and creek on the back nine without significant earthmoving is a feat of marvel in itself.

Pasatiempo is an absolute must for anyone with an interest in golf course architecture. If you are planning to see the great golf courses on the Monterey Peninsula, make sure you visit Pasatiempo to see how MacKenzie was able to fashion a great golf course without moving heaven and earth.