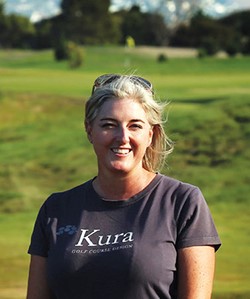 Kristine is the first female member of SAGCA, and formed Kura Design in 2008. Kristine has been involved in the design of high profile golf courses throughout Asia and Europe, having commenced her career with Nelson Wright Haworth in Singapore in 1993. Since then she has also worked as a designer and on-site design co-ordinator for Gary Player in Europe and China. She has worked on projects in such diverse locations as China and Malaysia, to Italy, France, the Czech Republic, and New Zealand

Kura is a symbolic NZ maori word which translates to ‘beauty’ in relation to the land. Fundamental to Kura’s values are environmental stewardship and a respect for the traditions and the future of the game of golf.

Kristine has a Bachelor of Applied Science in Landscape Architecture and Town Planning, gained from Queensland University of Technology, Brisbane, Australia.