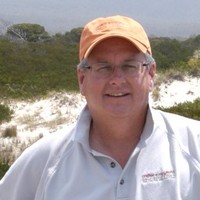 Neil is a 1980 graduate of Adelaide University where he was a member of the University golf team and was selected numerous times in the All-Australian University team. Neil has an illustrious record as a amateur golfer, representing Australia on four occasions, including the 1984 World Amateur Teams Championship, the Eisenhower Cup.

Neil is a second generation golf course architect whose father Brian Crafter was a golf professional who undertook golf design in addition to his teaching and television commentary activities. Neil lives in Adelaide, South Australia and operates the Adelaide office of Golf Strategies. He has undertaken the design and redesign of a number of courses in Australia and the Asia-Pacific region.Neil is also a golf historian and is actively researching the work and lives of golf architects Dr. Alister Mackenzie, Alex Russell and the writer Bernard Darwin.