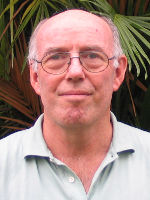 Ted began playing golf in his mid-teens and rapidly gained a passion for the game. Due to the passion and much practice but sadly little talent he managed to attain a low single figure handicap. His brother Geoff had the talent and commenced his professional golfing career in the 60′s. Ted meanwhile became a civil engineer and worked in this field both overseas and in Australia until, in 1973, the brothers combined their talents to form a golf course design firm.

Ted has run this company for over 30 years during which time a wide range of projects from single hole redesigns to multiple course redevelopments have been successfully undertaken in Australia and Asia. Ted combines his technical skills with understanding of the game and a sensitivity for the environment to create golf courses that are interesting to play, aesthetically pleasing and cost effective to construct and maintain.

Ted has been a member of SAGCA since its inception and has been pleased to see the status of the Society grow over time to a point now where society membership is understood by golf developers and the general golfing fraternity to indicate the professionalism and integrity of each of its members.

In 2014 Ted and long time employee Jason Winter formed Parslow & Winter Golf Design to recognise the contribution Jason has made over the years.