In an age when lengthening courses is the norm, finding some elasticity within a design is important if the game is to retain a significant portion of its participants.

In the early years of the 20th century, England’s Harry Shapland Colt was one of the first architects to recognise the dormant potential of elasticity in a golf course. – Lyne Morrison 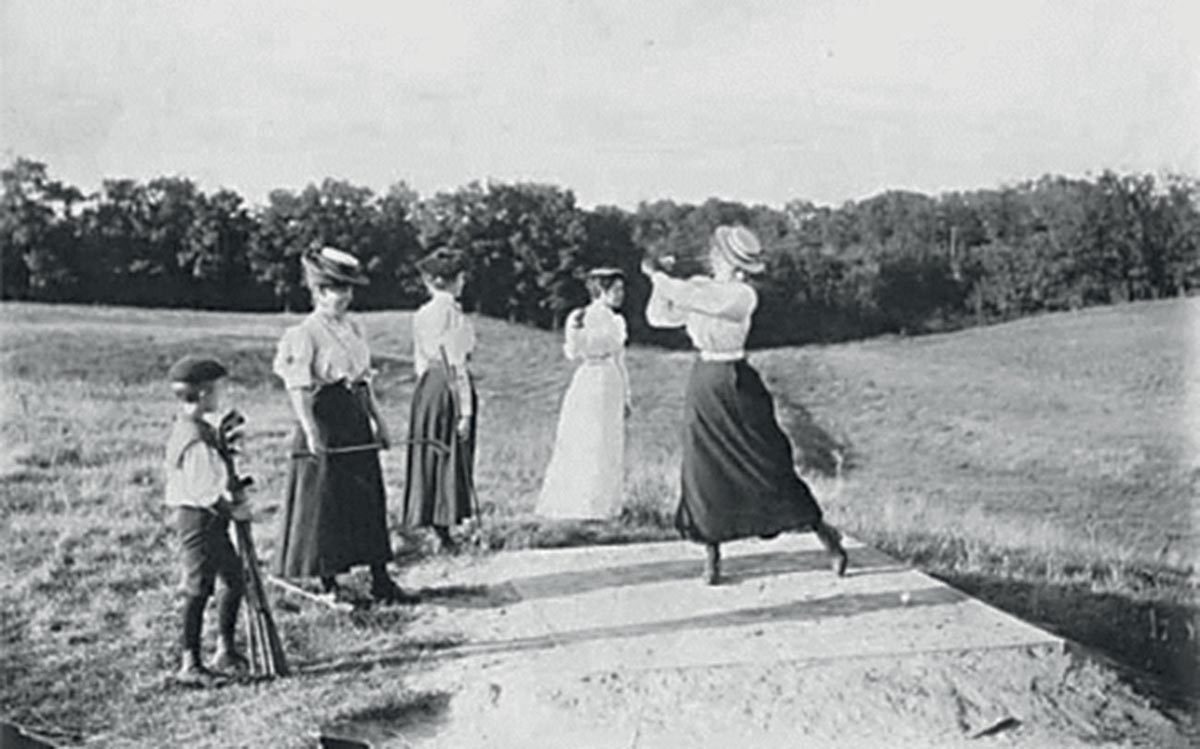 Some decades on, with a shift toward the modern era of course design, Robert Trent Jones Sr spoke of a design ethos that included “a balanced hole for the various classes of golfers” and the need “to create flexibility in the tees”. Jones acknowledged that the golf course had to be fun for everyone.

Even so, it was not until the late 1980s that American Society of golf Course architects past president, Alice Dye, pressed her husband Pete and other architects, to design better  forward tees for women. Until that time man in the United States had a choice of playing from different teeing grounds to accommodate their various abilities, whereas women had no choice. 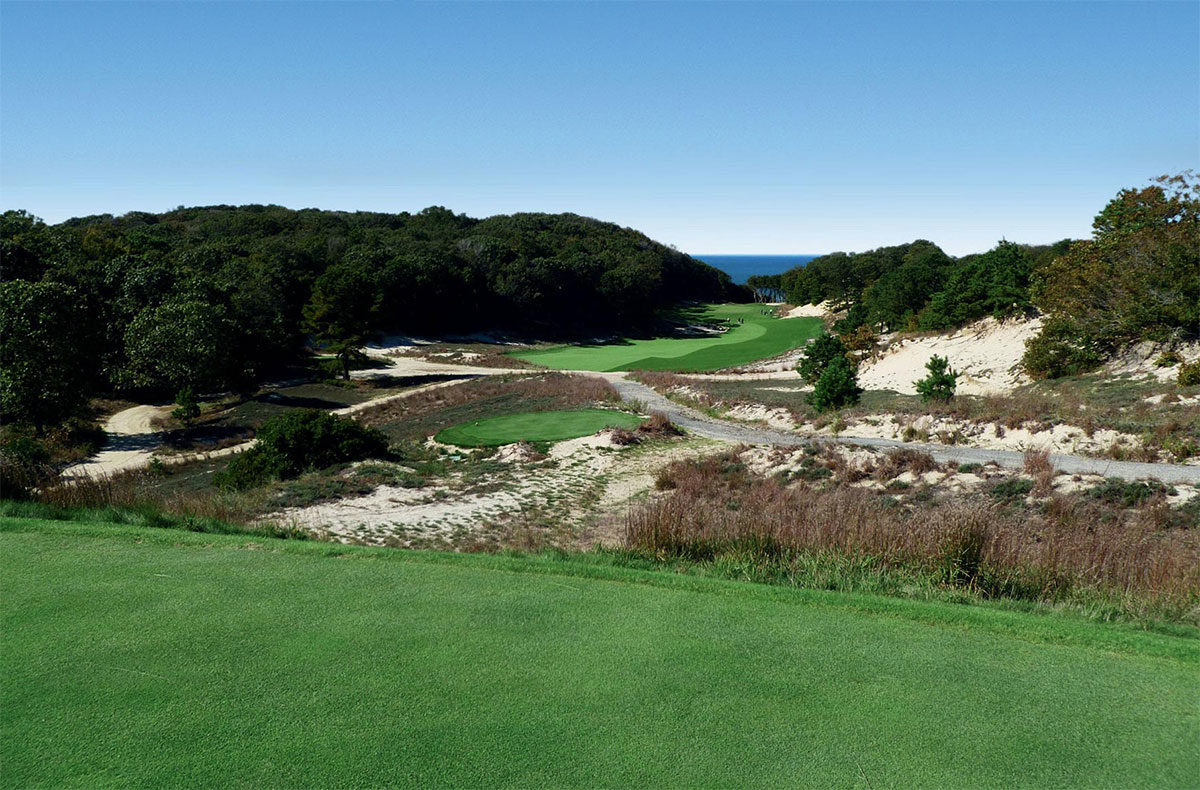 On the 15th at Friars Head, elasticity is introduced through seven tees that quietly work toward the fairway. Such flexibilty ensures a range of player is roused by the majesty of this golf hole. – Changing Course for Slower Swing Speed Player – Issue 16 – Lyne Morrison

In a bid to provide more manageable and enjoyable play, Mrs Dye called for the introduction of a Two Tee System for women and a reduction in hole yardages. her teachings brought positive influence to a generation of American course architects, among others, along with improved levels of playability for a previously overlooked segment of player.

As golf entered the new millenium, commentator Geoff Shackelford claimed: “Good players want back tees to play their courses as architects meant them to play, so why not use the same logic with forward tees?” Shackelford encouraged “superintendents, golf professionals and club managers to seek the help of architects and re-evaluate their courses’ forward tee positions”, adding that better-designed forward tees would address a sizeable percentage of the regular play.

Meantime, Jeff Brauer, also a past president of the ASGCA, had long been concerned with design issues that affect all golfers, including women and seniors. On the question of hole yardage and the slow swing speed golfer, Brauer says: “It’s time to rethink course length in terms of just enjoying golf, rather than trying to compare ourselves to the pros. If form follows function in design, something has to change. Right now, form follows outdated golf traditions.” 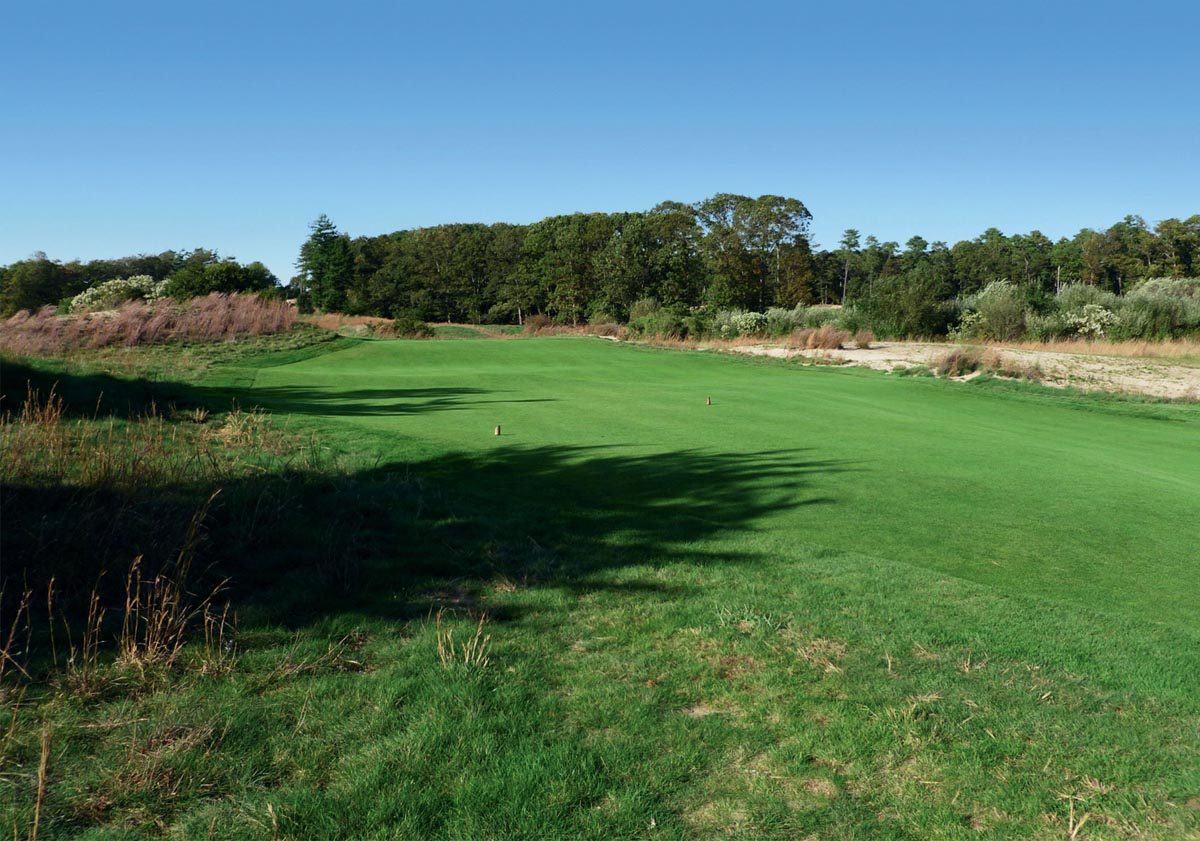 The most elastic and least intrusive tee of all is set within the fairway, as shown here at Friars Head. – Changing Course for Slower Swing Speed Player – Issue 16 – Lyne Morrison

More recently, consultants Arthur Little and Jann Leeming, who specialise in golf course management and tee positioning, have brought forth meaningful change for the slower swing speed golfer. Forward tees at the acclaimed Bandon Resort in the USA are now on the scorecard and, at Cabot Cliffs on Cape Breton Island, Nova Scotia, Little lately assisted the modern master of course architecture, Bill Coore, with the siting of a course that fits the golfer whose swing speed is around 65mph. All of Mike Keiser’s courses at Bandon and Cabot now have tees for 65/75/85/95 and 105mph swing speed golfers.

Little shares his thoughts here, on how best to capture the latent potential of the female golfer. He notes that “while women start enthusiastically and are interested in playing, most leave after trying. The reasons for quitting include time and access, but intimidation and the difficulty of the sport are the biggest hurdles”. 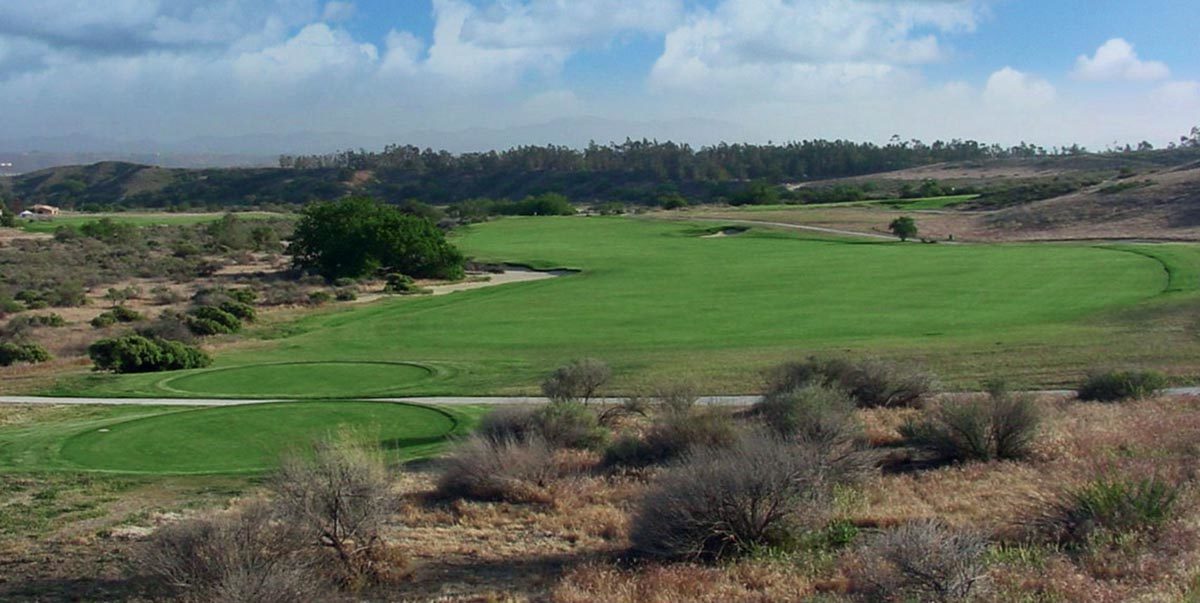 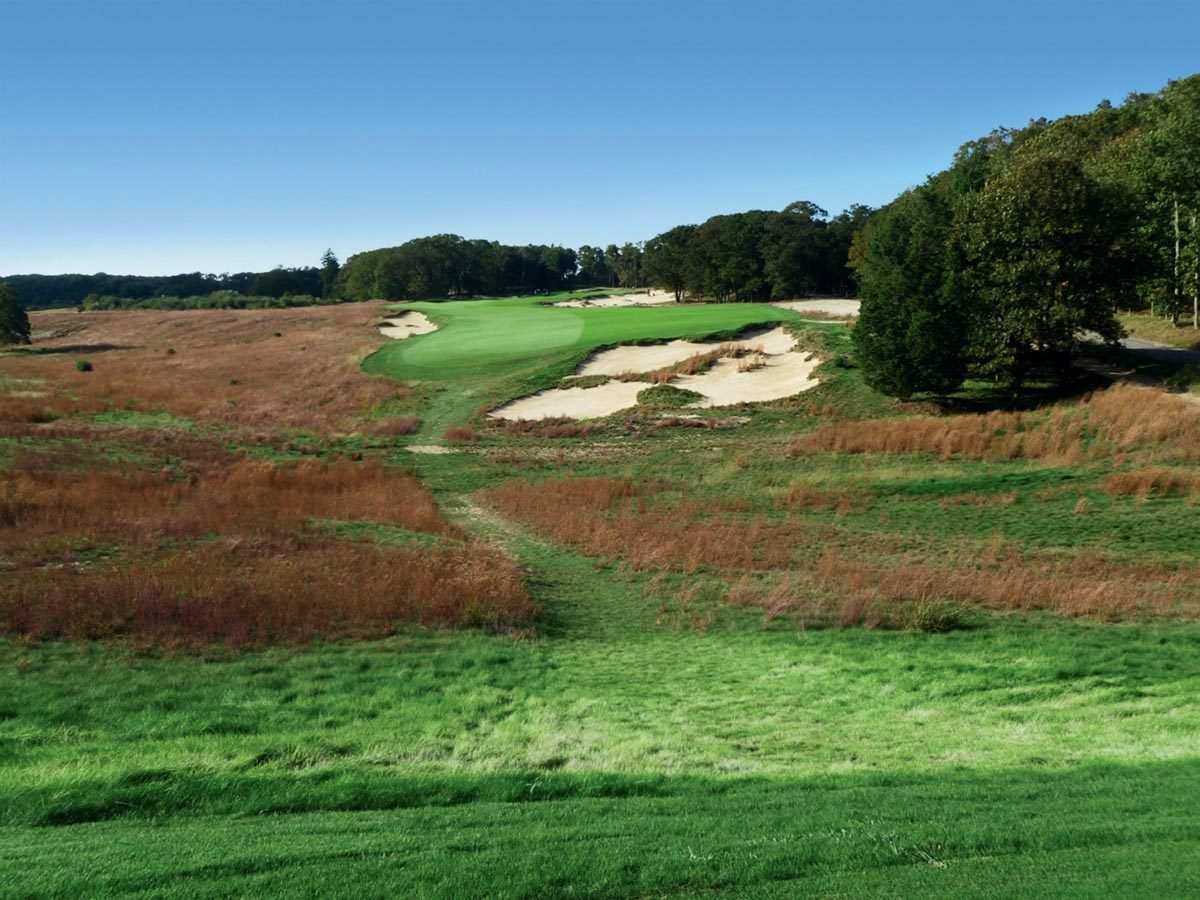 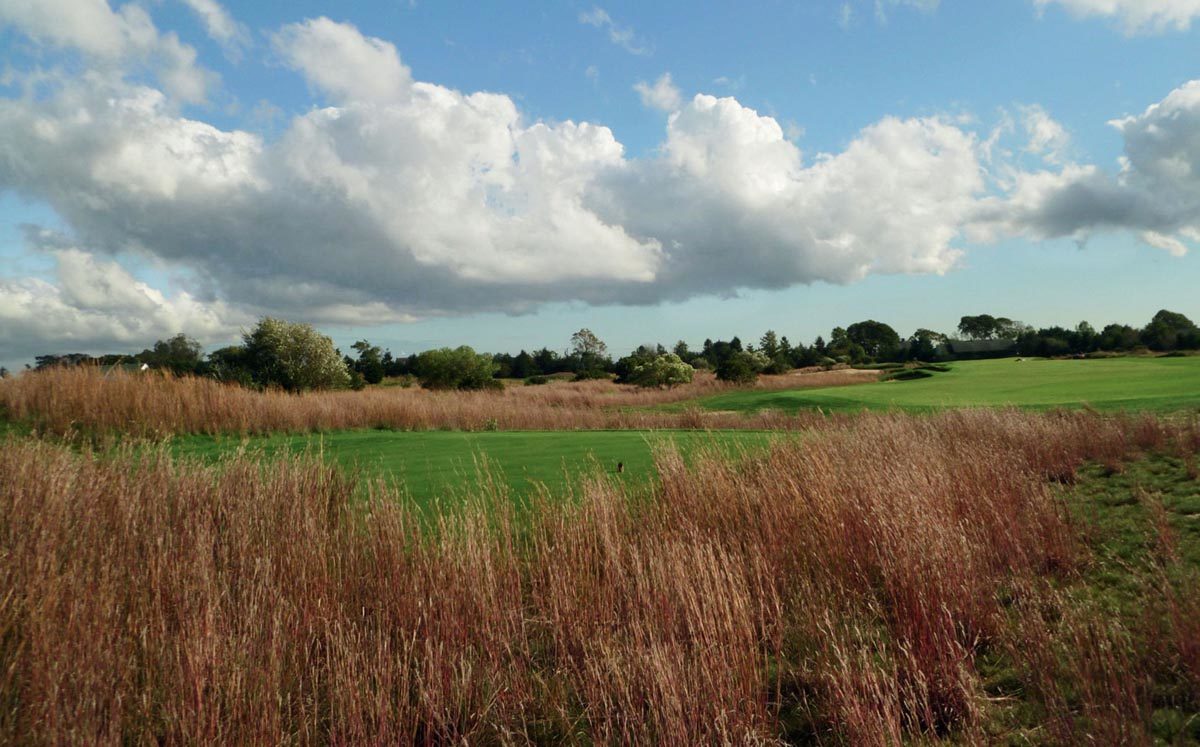 He continues: “The way courses are built is the primary factor in the low percentage of women’s participation; they are on average way too long and place women at a significant disadvantage to their male counterparts. This design flaw is caused by a lack of understanding or disregard of the women’s swing speed.”

This results in a level of course playability that is lesser to that played by men, and one that makes the sport frustrating as opposed to fun and engaging. “Unless this design flaw is fixed, women will never be enthusiastic, long-term customers and golf facilities will never truly reach the full women’s market,” Little adds.

In Australia, levels of participation in the female golf market have been falling for several decades. Meantime, women regularly tee up for a game where bogey is a victory, where 90 can’t be broken – even when players hit the ball well. For this golfer, course set-up is often stacked against good scoring and the thrill this brings forth, eliminating much of the fun to be derived from the game.

In noting that courses of 5400-5600m (5900-6100 yards) in length are typical in this country, Little explains: “The average woman will not be able to reach many, if any, greens in regulation, with the possible exception of the occasional par-3. This means she will rarely have the chance of two-putting for par, never mind having a putt for birdie.

In analysing the average female game more closely, Little adds: “She has a driver swing speed of 65 miles per hour (mph). This translates mathematically to hitting drives 125-130m (135-140 yards). Second shots are generally hit around 85 per cent of the distance of drives. This means that a woman whose average drive is 125 metres (135 yards), hits her second shot 105 metres, (115 yards). Simple maths tells you, then, that par-4s should be no longer than 230 metres (250 yards) if the 65mph player is to hit the green in regulation. That’s hitting two perfect shots with her longest clubs!” There are few par-4s of this length.

Little suggests that courses designed with a woman’s drive of 150 metres in mind (165 yards) often also fall short of providing these golfers the opportunity to play to greens in regulation figures: “Distance to the green on a par-4 should be no more than 280 metres, (305 yards).” Unfortunately, such par-4s are also scarce on the ground.

“The goal should be to provide a course that is comfortable for women to play and therefore an enjoyable, fun experience. To keep women in the game, we must allow them the same opportunities we allow men and give them roughly the same clubs for their approach shots into greens as their male counterparts use.”

‘Least thought continues to be given to the furthest forward tees. It is as if adding a forward tee indiscriminately is “good enough” for women. It isn’t.’

“Getting to the right yardage for the average woman golfer is a matter of mathematics. Assuming a drive of 130m (140 yards), the great majority of players will hit their next longest club 85 per cent of the drive or 110 metres, (120 yards). This means that the maximum yardage for a course’s forward tees should be: par-3s 130 metres (140 yards); par-4s 240 metres (260 yards); and par-5s 350 metres (380 yards). Such yardages represent a course of some 4280 metres (4680 yards), with the average woman still required to hit driver on the par-3s and a fairway wood approach on other holes. The average male golfer is not asked to do that.”

“A better, more enjoyable approach for this category of golfer would be to provide par-3s of 110 metres (120 yards); par-4s of 210 metres (230 yards); and par-5s of 300 metres (325 yards). This results in a course whose total length is 3730 metres (4080 yards). This course will fit the average woman player and allow her to hit the same types of approach shots to greens as her male companions, ie short and mid-irons rather than fairway woods.” 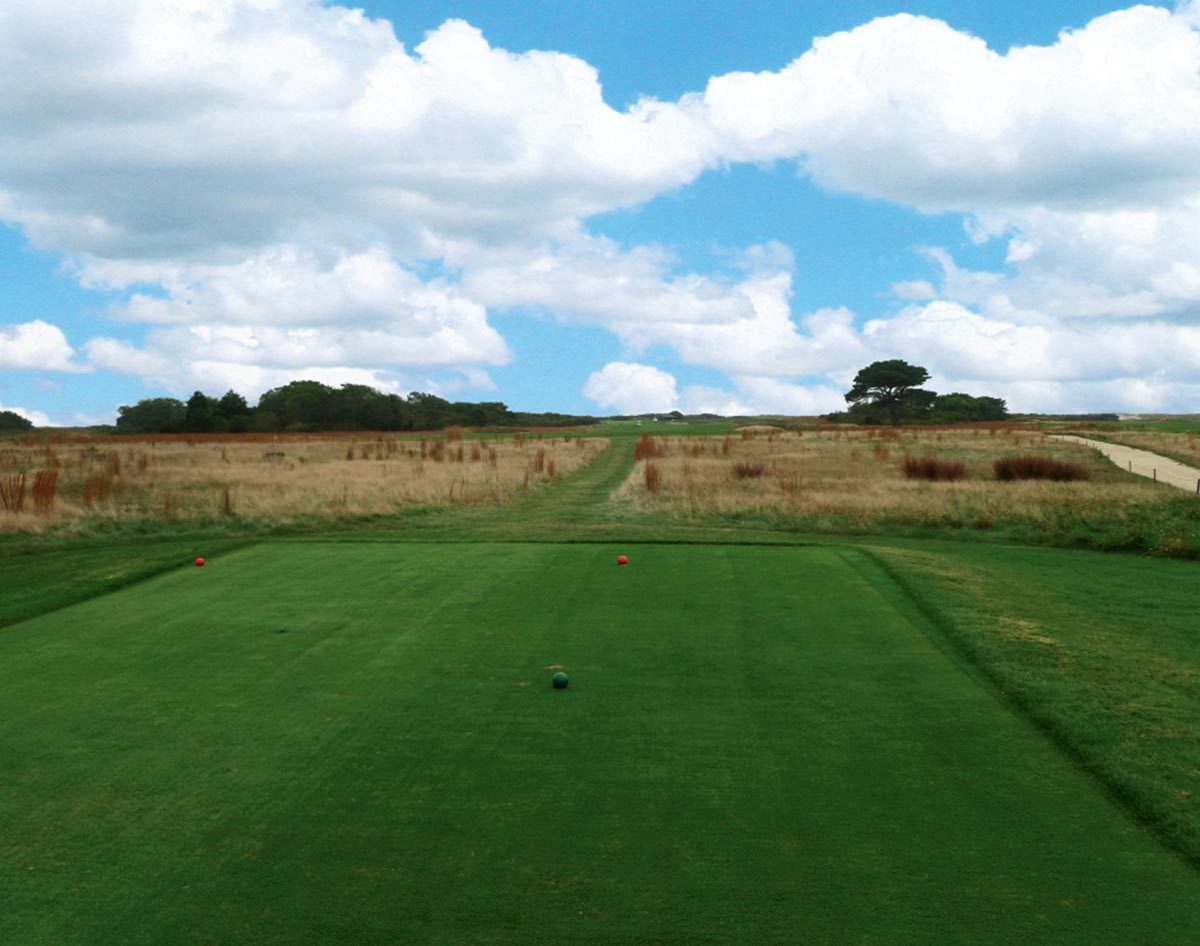 Some may shun a seemingly formulaic approach to course set-up, suggesting this method is at odds to an intuitive response to course design. Others – usually committee members and stronger players – balk at short yardages, holding firm to the belief that handicap accommodates on-course inequities. However, as Alice Dye noted some 30 years ago: “In creating new forward tees, it is not the intent to take the challenge out of the game. Rather, it is to adapt the playing characteristics of the holes to the major segment of players.”

Jeff Brauer says: “Least thought continues to be given to the furthest forward tees. It is as if adding a forward tee indiscriminately is ‘good enough’ for women. It isn’t.” 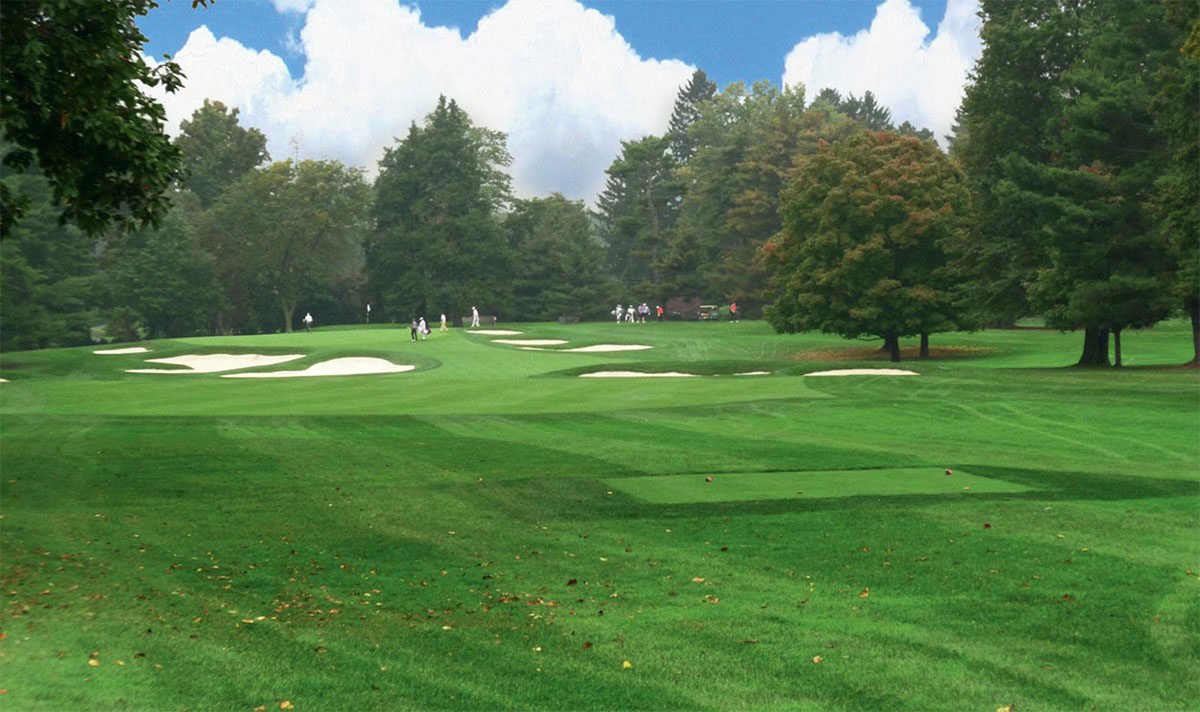 He notes that the modern aids available for measuring ball flight today “have confirmed what most just ‘felt’ in decades past” and for him, it is difficult to continue to design 4600m (5000 yard) forward tees when the true distances hit by women had been accurately revealed.

Mr Brauer adds that shorter yardages are more accepted after golfers try them out. “I have found that going hole by hole on an existing course, and allowing the everyday players (females, but senior men too) tell us where they have problems – such as forced carries – and adjusting tees individually without regard to total course length, works best. When the course comes out where it comes out, which is usually much shorter, then they sometimes want some adjustment to hit ‘preconceived notions’ about how long a course should be, but never on holes where the length or carry makes it unplayable.”

In a bid to stem the decline in female golfers, both the Australian Sports Commission and Golf Australia have called for a shift in cultural attitudes. At the same time, we must question that if women and other slower swing speed golfers are to be provided a reasonable playing journey, does a century-old approach to course set-up, remain relevant today?

Handicaps are an integral part of the Australian golf landscape. Current data outlines a stark discrepancy between genders with the average female holding a GA handicap of 31.0. Women are clearly playing a different game to men who carry an average index of 19.5. (See Table 4 for handicap detail.)

The truth is the range of abilities between the elite golfer and the slow swing speed player is now greater than ever. Much thought has been given to lengthening tees, but almost none to shortening them. For women and seniors, excessive course yardage is often partnered by difficulty, intimidation and time-consuming play, turning many from the game. A better response is needed.

Jan Leeming reminds us that “women want to feel like real golfers”. To meet this end, course set-up comprising a variety of yardage, genuine teeing options, a range of club choices and real playing interest is required.

If golf is to remain relevant in a contemporary world, it must bring more enjoyment to more players. A century ago, golden age architect Alister MacKenzie counseled: “The ideal hole is surely one that affords the greatest pleasure to the greatest number.” In looking more deeply at the slow swing speed game, we gain new insight into challenges faced and increased understanding of the need for meaningful elasticity to be included in our golf courses.

* Lyne Morrison believes golf courses should provide a challenging but manageable playing experience that build inclusion for all levels of golfing ability. She is a strong advocate of improved course set-up that provides a more enjoyable and rewarding game for women and seniors. Lyne has worked in the field of golf course design for over 25 years.