Economic Solution: Reshaping The Business Model – A Study in Three

Times are tough for golf these days, both in Australia and around the world. Many clubs both at home and overseas, are struggling to make ends meet. But tough times sometimes generate innovative and enterprising responses, and we’re involved with three golf clubs who have found interesting ways to solve their economic problems – and hopefully ensure their long-term viability. – Bob Harrison

In all cases the solutions have involved both new golf holes and the remodelling of existing ones. The three courses involved are the Newcastle Golf Club, Brighton Lakes (formerly New Brighton) in the inner western suburbs of Sydney, and Townsville Golf Club.

While Newcastle’s financial situation has not necessarily been a desperate one, the club made the wise choice to look to the future to secure their ongoing viability. First, they considered the possibility of developing some of the land near the current 18th green and the hill behind it. This concept gradually expanded to include a strip of land along the whole of their frontage to the main Nelson Bay Road.

This ambition was subsequently constrained by the need to satisfy the local council’s flood requirements and avoid adversely affecting the club’s nearby neighbours. As a result of this constraint the current concept intends to develop a retirement village along much of the frontage currently occupied by the 18th, 17th and 16th holes.

The land occupied by the 16th and part of the 17th holes is possibly the least attractive on the entire property. The existing 1st and 18th holes will also be taken from the course; however, the club was in the fortunate position of having sufficient land to replace these holes. We will develop the new holes in attractive, rolling, sandy country in the eastern section of the property which currently contains astonishingly attractive holes such as the 5th and the 10th. There will be approximately seven new holes (shown on the masterplan). 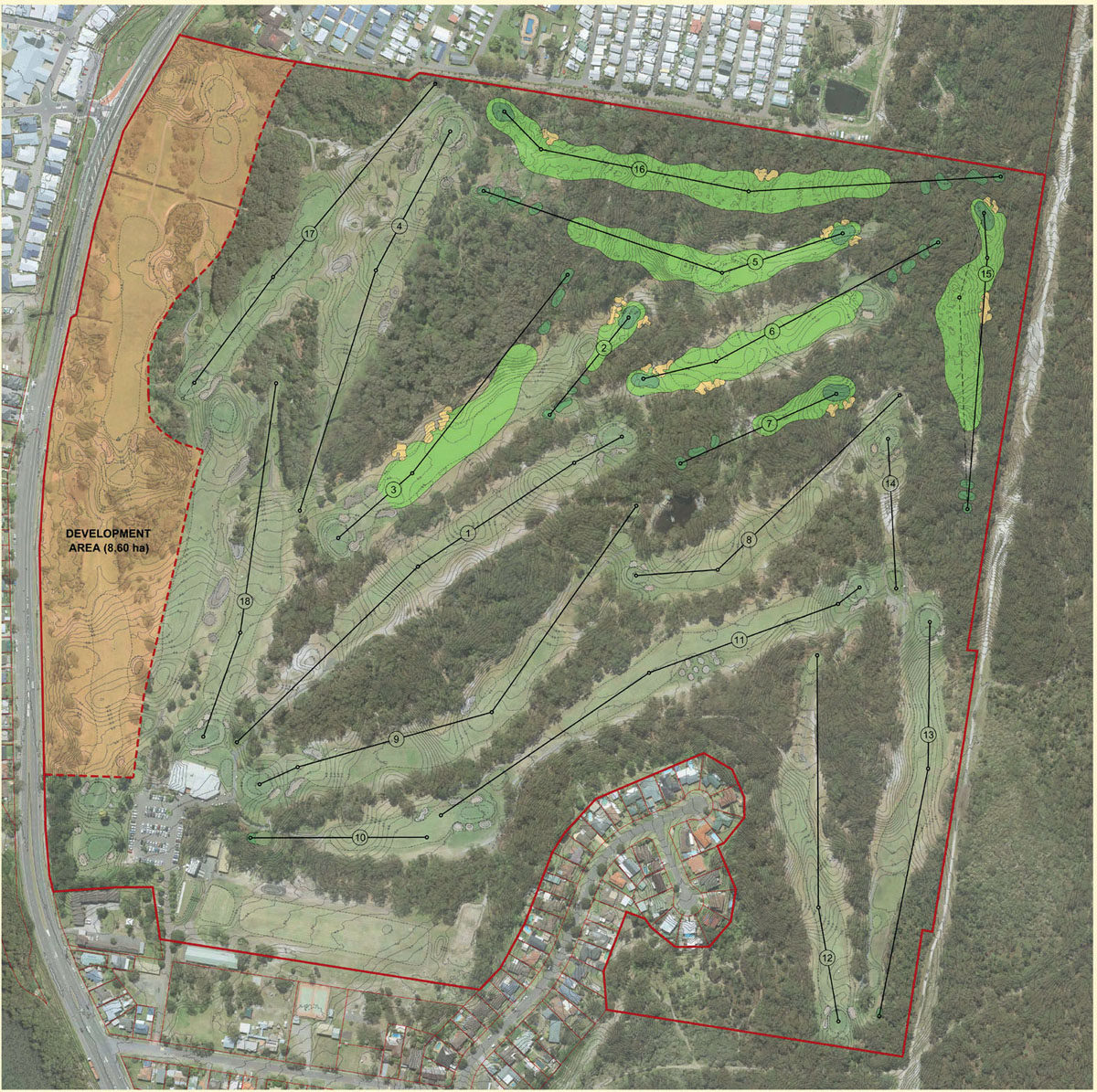 This overall concept represents an absolute win-win situation for the club, because not only will the course see the development of better holes to replace perhaps the weakest ones, but it will also negate a safety issue. The club was facing a potential problem from balls being hit onto the adjacent road – and into the houses across that road – from the 17th and 18th holes, and this problem needed serious attention.

New holes will be developed on attractive rolling land, like at the 5th. – Economic Solution: Reshaping The Business Model – A Study in Three by Bob Harrison – Issue 19 – Bob Harrison

The Newcastle course is often ranked in Australia’s second 10, and was arguably being held back from perhaps entering the top 10 by the quality of the “finishing”. The course contains some of the most charismatic holes in spectacular rolling sandhills, but the quality of the style and shaping of the bunkers and greens, and the strategic merit of many of these, were arguably holding it back. Apart from building seven new holes in favourable country, it is also now the intention to improve the finishing of the remaining holes by remodelling them, and this will hopefully see Newcastle edge into the top 10 in the future.

Clearing of the proposed new holes at Brighton Lakes has begun, and is being done in stages to make sure we don’t remove any vegetation that is so attractive it would warrant tinkering with the detail design to preserve it. The clearing is being done early because these holes all lie in the flood plain of the adjacent Georges River, and the levels of playing surfaces will have to be raised to a small extent to account for high-frequency floods. This operation can’t be done by cutting and filling, partly because we have very strict constraints on how much of the Australian bush can be cleared, and partly because the ground has acid sulphate potential – which means that it is both a difficult and environmentally dangerous proposition to be excavating large water bodies to create playing areas. For this reason, the subgrade material is being brought in from off the site, and the timing of this is a little unpredictable as it is being conveyed from reasonably nearby construction sites. 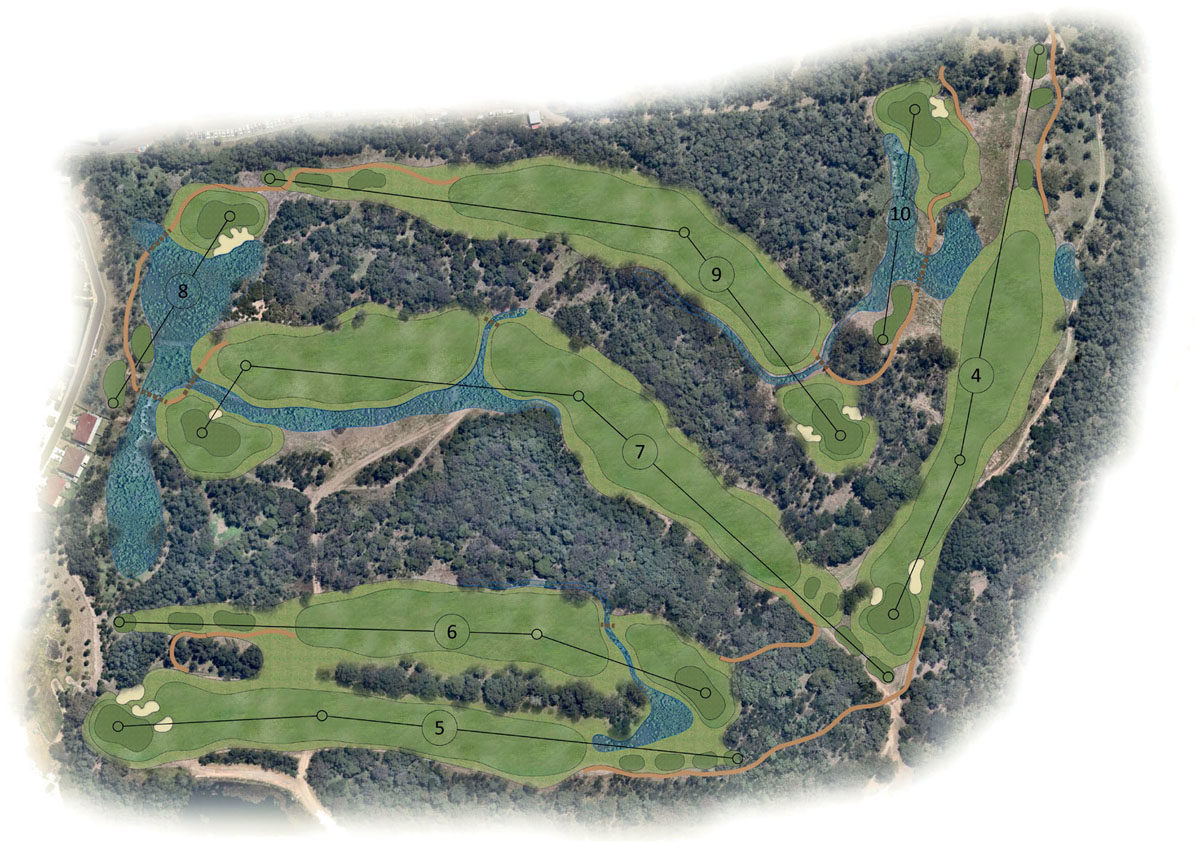 The background to these new holes is that a few years back the club was doing it tough financially – but was in the fortunate position of having half the course in flood-prone land and the other half on rolling terrain above the flood, and having a developer interested in their land. They have done a deal with one of Australia’s prominent residential developers, Mirvac, under which all the flood land has been cleared, and is being developed as a housing estate. This has enabled the club to build a massive new clubhouse, and will also enable the proposed seven new holes south of the M5 freeway to be constructed from about March next year. This “construction” will be the specialised golf works – shaping, irrigation, greens, tees, bunkers, paths, grassing, etc – which follows from the initial exercise of clearing and importing the subgrade material.

There are very strict rules about what you can do in the floodplain. For example, we were required to maintain both flood storage capacity and flood ‘passage’ (the movement of the flood water). To achieve this, we drew proposed half-metre design contours over the entire proposed golf course site so that we could demonstrate by computer modelling that the proposed design complies with these requirements. It’s a very demanding process to, on the one hand, prescribe attractive and sensible shape and, on the other hand, achieve the required volumetric objective.

My own involvement with New Brighton dates to 1981 when I was working by myself and developed about nine new holes – mostly in the floodplain – as part of New Brighton’s upgrading program, which followed from a new freeway knocking out previous holes. Most of these new holes were attractive in isolated corridors in the lowland forest. Then, in 2012, the club started the program described above, which will eventually lead to all 18 holes being relatively new, totally new or remodelled. There are 10 new holes in the proposed construction program because the new holes to the south of the freeway have to then connect to the majority of the holes to the north – in order to make a workable 18 with a new clubhouse location.

The floodplain forest is dense, and the new holes will have a nice feeling of isolation because the cleared corridors are mainly well separated. We will then keep the shape of the fairways low and soft, because they would look and feel out of place if they were more extreme – apart from breaking the rules related to flood. To fit in to this wilderness landscape the bunkers will have rugged edges and the sand will have an earthy colour. On the one hand we don’t want a pristine finish in a very non-pristine environment; and in any event, there would never be any point to a pristine appearance when the bunkers will occasionally be flooded with slightly muddy water.

We will develop narrow areas of wetland, and these areas will play an important role in the strategy of the holes. On the short par-4 6th, for example, the closer you drive to the wetland along the left, the better the angle of approach along the length of the green, which will be bunkered along the right side. The par-5 7th hole doglegs to the left, and drives placed to the left of the fairway close to the wetland will enable good players to make a choice of going for the green across an extended wetland or laying up short to the right. This is the sort of theme that continues through the design objectives of the new holes.

Stage 1 of the construction has been completed, and this included the new par-3 18th hole and adjustments to what will become the 1st and 17th that will allow them to radiate from the new clubhouse. 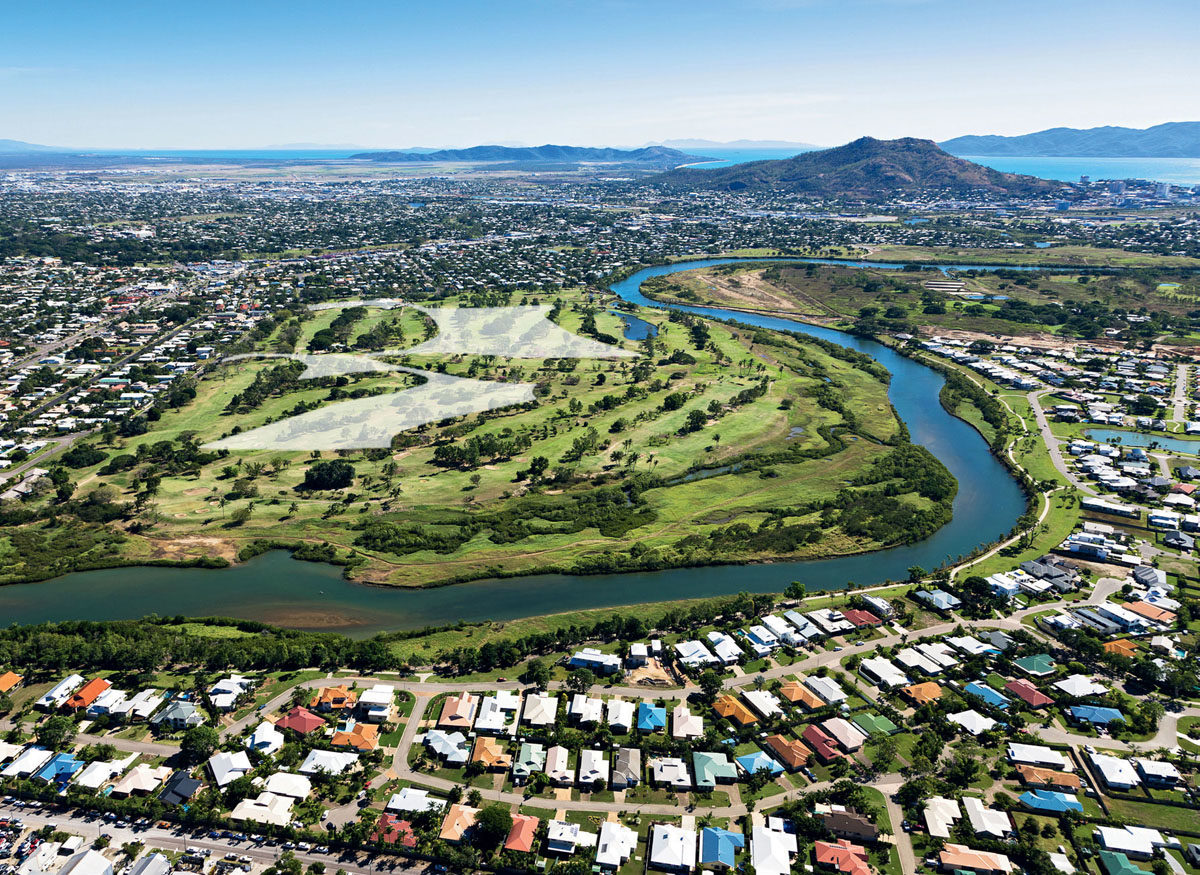 Townsville Golf Club was fortunate to have 27 holes adjacent to the Ross River. Some five years ago we produced a masterplan which reconfigured the course to a new 18-hole golf course and two precincts of residential development. 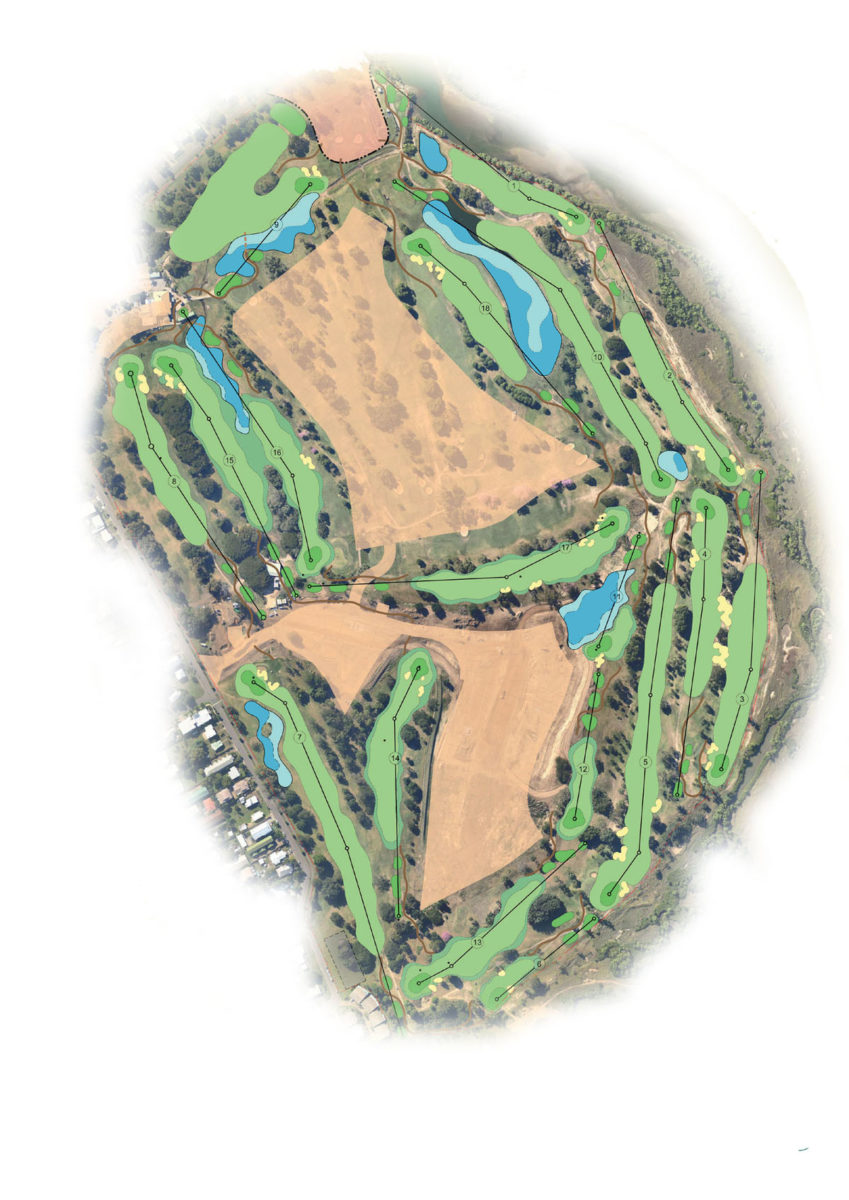 The idea was to progressively sell the residential lots, with the income from these sales paying for the development of the new course, hole by hole. The southern precinct has been completely sold, and this allowed the first stage of the golf course development, which finalised eight holes in 2016. Five of these were completely new holes, and three were remodelled versions of existing holes.

In an ideal world, the second stage for the remaining 10 holes was to have followed during 2017, but it has been postponed until next year to ensure there is a sufficient long-term water supply for both the development of the new holes and the ongoing commitment to the 18-hole course thereafter. The delay this year is, in a way, an ultimate irony because the club was on the fringe of Cyclone Debbie which completely inundated nearby areas, but which dropped only 5mm of rain on the golf course. The second stage will involve five completely new holes and five which will be remodelled; it involves moderately extensive civil works which will happily provide the fill material needed for the second residential precinct to be raised above the critical flood level.

Our design for this project has involved an interesting interaction with Karrie Webb, who in her younger days was an active member of the club and still maintains a strong connection.

While the climate is substantially different from that at Brighton Lakes, one similarity is that both courses are flood-prone, at least to a moderate extent, and this has led to similarities in the style of bunkering chosen for the two projects. As at Brighton Lakes, the bunkers at Townsville will not have white sand, and are constructed with slightly ragged edges to give them an earthier appearance. In the Townsville case, however, the intensity of the rainfall made it worth constructing the bunkers to conform with the capillary concrete concept to ensure rapid drainage and to help maintain the sand on bunker faces – even though it is somewhat likely that at least some of the bunkers will occasionally be inundated and that the flood water might well contain a substantial portion of silt.

These are just a few of the innovative methods that some of the clubs we deal with have adopted to secure their futures in difficult times. Ashlar Golf Club moved into the completed Stonecutters Ridge course which I worked on at GND, and their previous course was developed. Residential development is a common thread. Other clubs have found different ways; for example, it is now reasonably common for clubs to consider amalgamating and relinquishing one of the two courses to residential development. It’s a cycle in the life of golf, and there will be solutions for many, but probably not all.