A land sale to secure the future of Bayview GC on Sydney’s northern beaches also presented the challenge of keeping an 18-hole playing experience intact.

Bayview Golf Club is a picturesque 18-hole members course just north of Mona Vale on Sydney’s northern beaches and around 35km from Sydney’s central business district. It enjoys good position, with glimpses of the Pacific Ocean, some 2.5km away to the east, visible from its highest points. – Graham Papworth 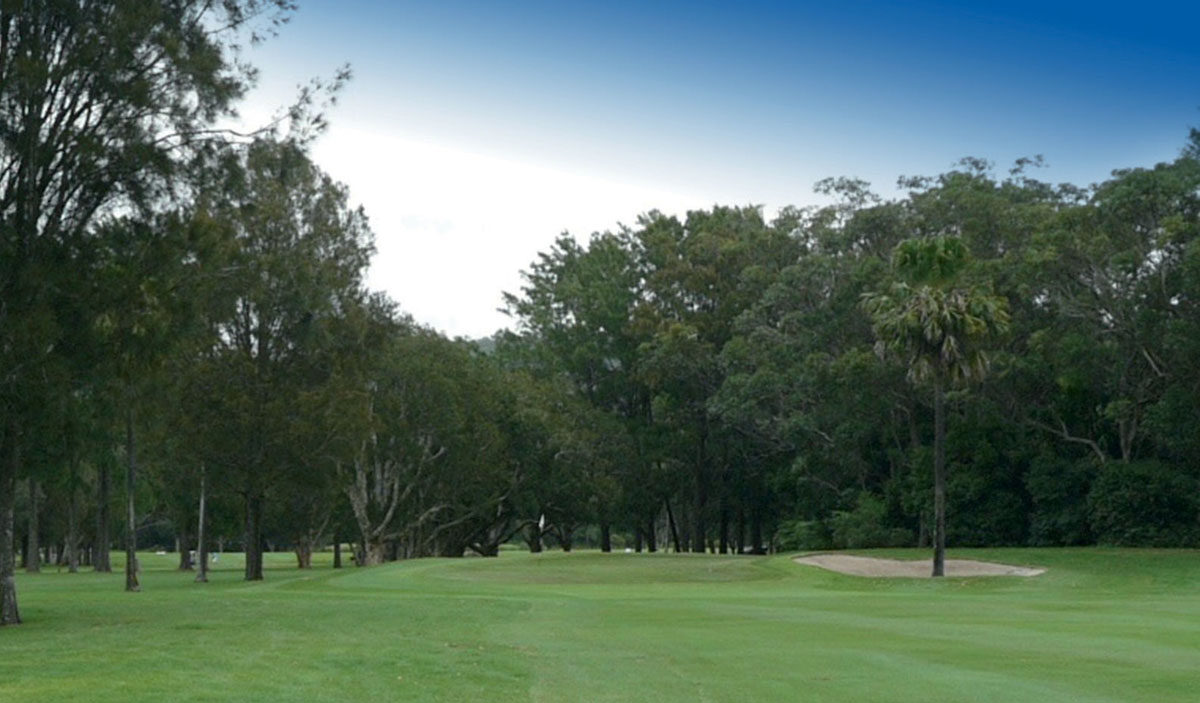 ADDING APPEAL: Some bunkering, definition and run-off slopes have improved the aesthetic and playability of the 2nd hole, :Before – The Chronicle Continues – Bayview GC, Sydney by Graham Papworth – Issue 19 – Graham Papworth

Like most courses nearing a centenary year, Bayview has experienced myriad changes since inception in 1924 by John Orr, a New Zealand-born sheep farmer who purchased the property then known as Winnererremy Swamp and built five golf holes essentially for his own use but soon opened it for public play in 1926. It was very much a case of Mr Orr and his wife Christina being hosts to those playing, with their home doubling as a clubhouse, whilst the sheep tended the fairways. Visitors paid one shilling a round and an honour tin was used for green fees when the Orr’s were otherwise occupied.

Not long after the course opened a local sculptor, Mr Harold Squires, sculpted three elephants for Mrs Orr, which sat in a large pond in the front of their house. These elephants were restored to their former glory in 2009 and since then they have sat in a small pond overlooked from the new clubhouse.

As popularity grew so did the course, extending to nine holes by the end of the 1920s when a club was formed; then in 1933 it became an 18-hole affair following the purchase of 25 elevated acres of land across Cabbage Tree Road. As the ‘swamp’ name suggests, the creation of the golf holes was not a simple task – heavy clays on the flood plain were moved using horse-drawn scoops and skips to raise the fairways above the resulting lake.

That lake was tidal and remains so today. The builders soon realised that daily high tides greatly restricted the time available to reclaim golf holes, so tide gates were fitted to the channel that drained the site to stop that water returning with the incoming tide. It’s said in an excellent and extensively researched history of the club that the reclamation work involved windrows of fill planted with casuarina trees that were dragged in on a punt; these trees now separate the fairways, which were subsequently filled in using material excavated from the lake.

Tidal gates are in a similar location today but are now under Pittwater Road, a major thoroughfare, and although the culverts and gates themselves are much larger their purpose is the same: to provide as much free board as is practical in the varying conditions to receive drainage run-off from the course and discharge it downstream on the next low tide.

A clubhouse was built in the 1930s and benevolent founder John Orr died in 1941.

The club, having been officially incorporated in 1948 as Bayview Golf Club Limited, then leased the clubhouse and golf course from Mrs Orr directly and this arrangement continued until 1967 when the club purchased the course and clubhouse outright. 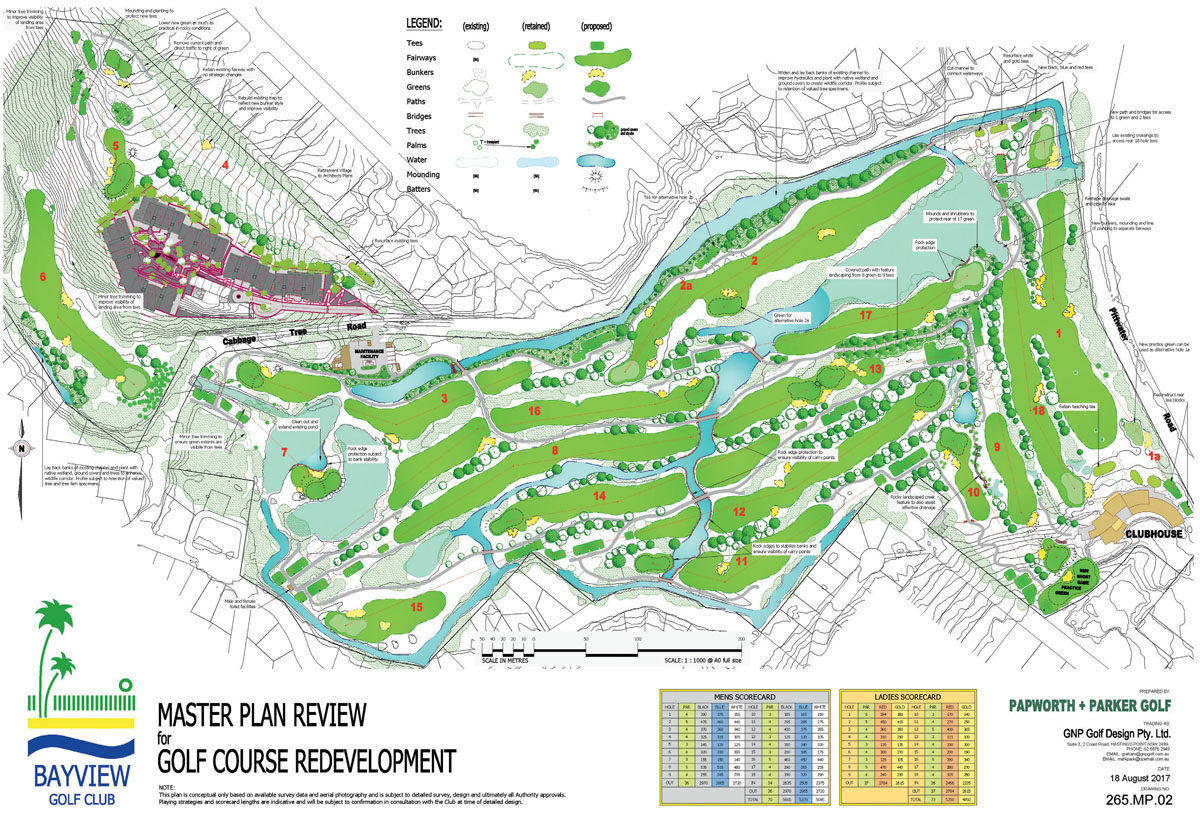 During this period and since then both the course and clubhouses have continuously been extended, upgraded or rebuilt. One of the more recent and major undertakings was to build a completely new state-of-the-art clubhouse in 2009 at a cost of $7.2M which was funded from the sale of land adjoining the clubhouse site. Whilst the result is impressive and obviously a welcome upgrade of member facilities, there was no net financial improvement in the club’s situation. In fact, the ensuing years saw a decline in net revenue and resultant trading difficulties, which in turn led the Board at that time to look for a way to hopefully reverse their fortunes. A State Government priority at that time was to encourage retirement-style living for our aging population and there was developer interest in attaining such a site within the property. The sale of land to fund the new clubhouse however resulted in a course area of only about 39 hectares.

This was in 2013, when Mark Parker (my colleague and frequent collaborator on many golf projects, especially in the greater Sydney region) spoke with me about the planning potential for a satisfactory outcome. We subsequently presented various options to the club hierarchy. These in essence revolved around freeing up two hectares of elevated land within the 25-acre parcel across Cabbage Tree Road that John Orr had purchased in 1933.

The differing options related to how the flow of play would enter and exit that land parcel and whether the existing maintenance facility would be renovated or rebuilt in a different location. Clearly though the retirement village site, being elevated with impressive views, had great development potential and the fairly constant and reasonably steep slope in this location wasn’t ideal for interesting golf, so the two holes lost from this area would not be of great detriment to the layout.

A key design consideration for the club was that the par-70 scorecard be retained without dramatically shortening the course length. Sensibly, a figure of 5700 metres was adopted as an acceptable minimum. Given the sporadic nature of the course expansion over the preceding 90 years and the geometry of the property, it wasn’t too surprising that loops of 11 and 7 holes were returning to the newest clubhouse at the time this replanning was taking place.

It was our intention, if possible, to achieve returning nines and as flooding and drainage had plagued the course since the early days, we undertook to improve that aspect as much as practical whilst still satisfying authority flood requirements. Given we were using a smaller space for the 18 holes placed greater emphasis on retaining as many of the trees as possible. Even though the majority are casuarina planted in single, straight-row fashion, they were needed to achieve a similar or an improved level of safety, with supplementary planting.

A Master Plan satisfying these criteria and meeting the club’s approval was produced in May 2014 and Waterbrook Australia, lodged an application with the NSW Department of Planning for the proposed retirement village and subsequently received a site suitability certificate.

At the time of writing the developer is in the process of applying for a Development Application to the Northern Beaches Council and we have made minor modifications to the Master Plan that reflect Council and community desire for the golf course to better act as a wildlife corridor by incorporating a native planting regime along the west to east orientated watercourses. Widening and flattening the watercourse banks will further improve the site hydraulics to not only reduce low-intensity flood impacts to the course but also to some of the surrounding residential properties. Excavation from the pond works will be used to regrade most of the lowest lying fairways and provide positive falls that will assist surface run-off. 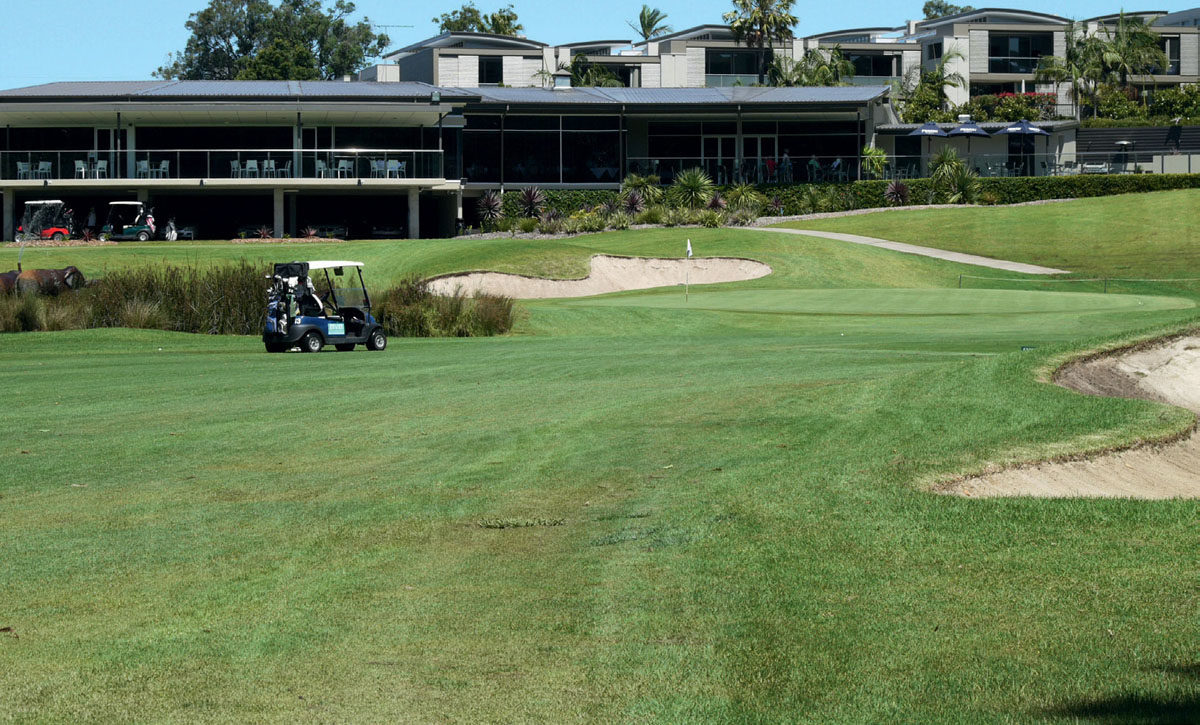 ABOVE: Adopting a more aggressive bunkering style throughout has been key, including behind the 18th green.: Before – The Chronicle Continues – Bayview GC, Sydney by Graham Papworth – Issue 19 – Graham Papworth 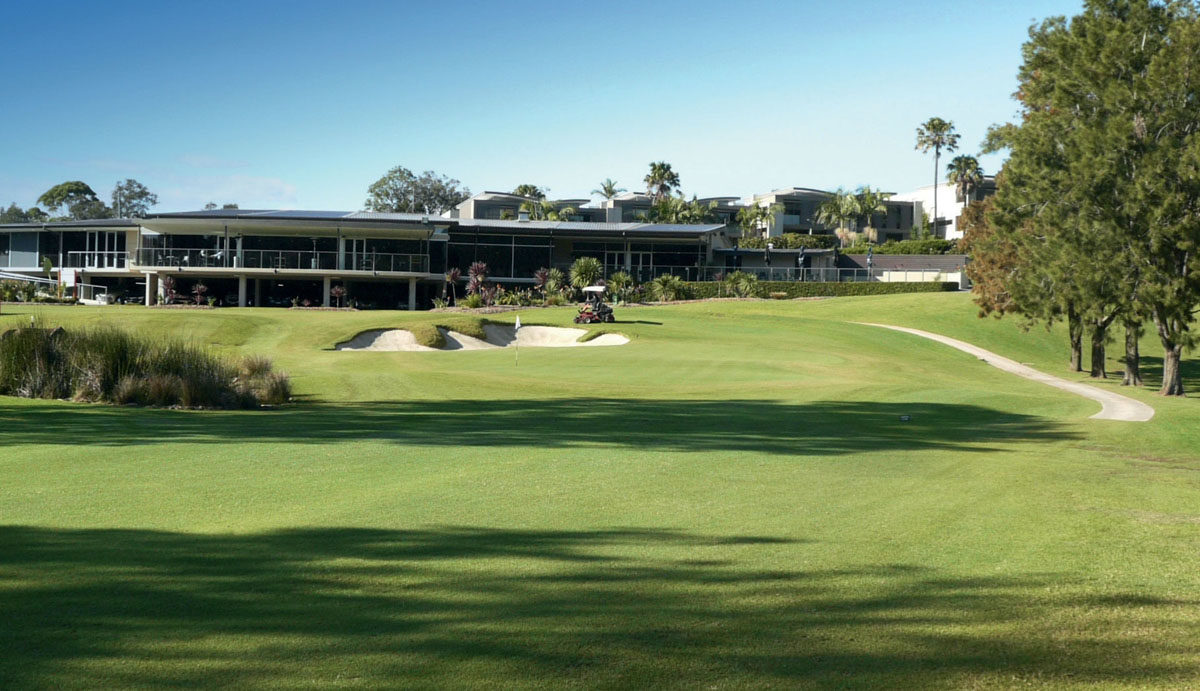 ABOVE: Adopting a more aggressive bunkering style throughout has been key, including behind the 18th green.: After – The Chronicle Continues – Bayview GC, Sydney by Graham Papworth – Issue 19 – Graham Papworth 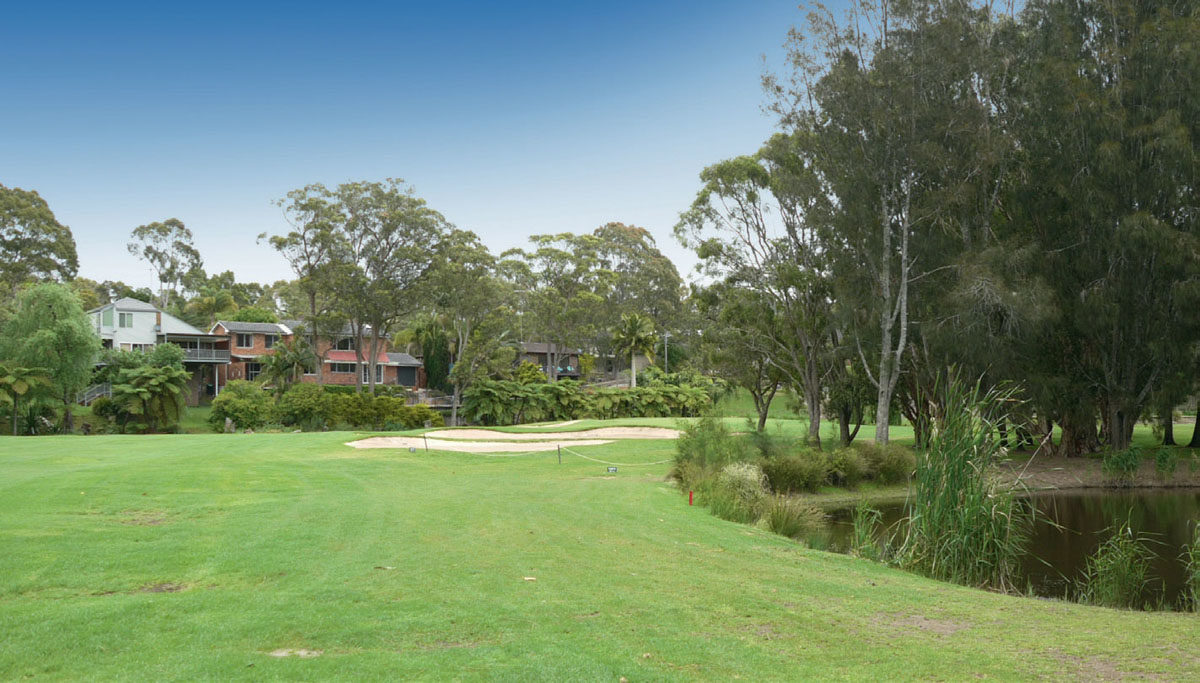 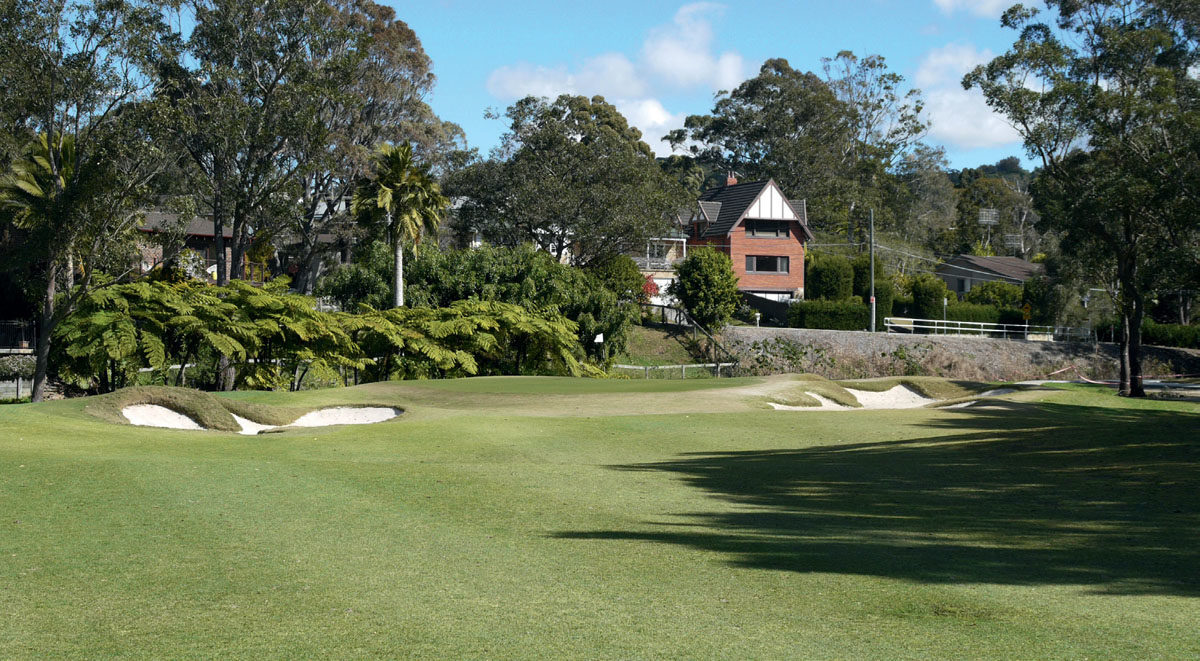 In the meantime, improvement works have begun on the course itself in accordance with the Master Plan and these have already played a role in enhancing the club’s trading position. Six of the existing green complexes that are common to the Master Planned sites have already been rebuilt and another is under construction. Other greens located to suit future play will also be built in readiness to provide spare holes that can be used to retain an 18-hole playing experience while other holes are taken out of play to be reconstructed in stages. 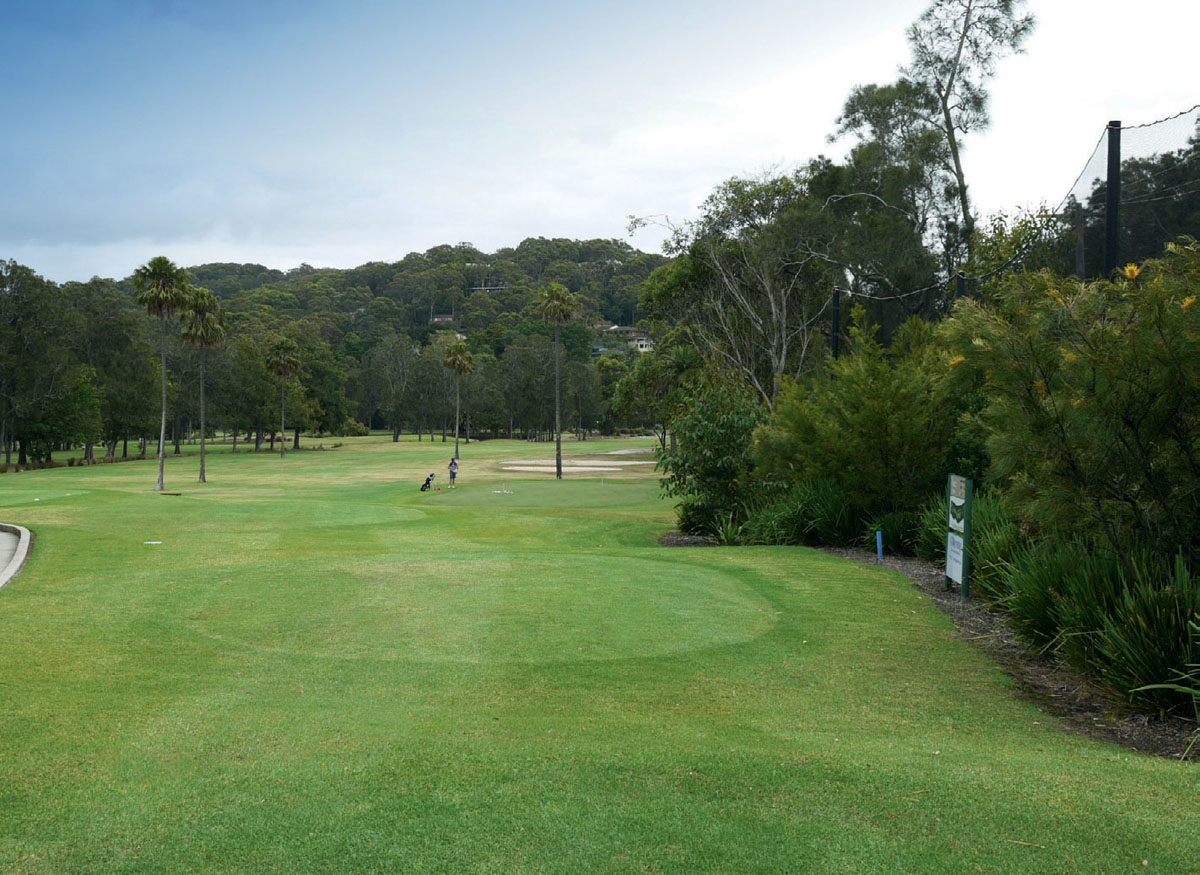 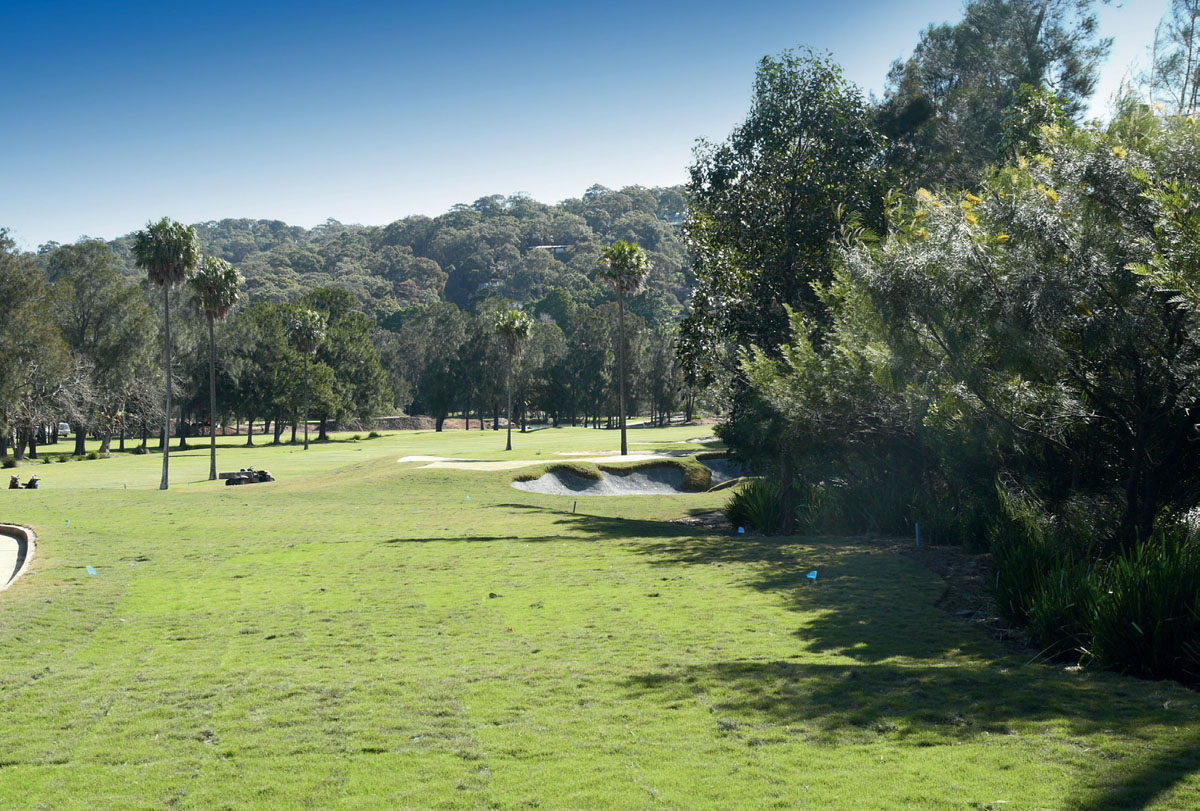 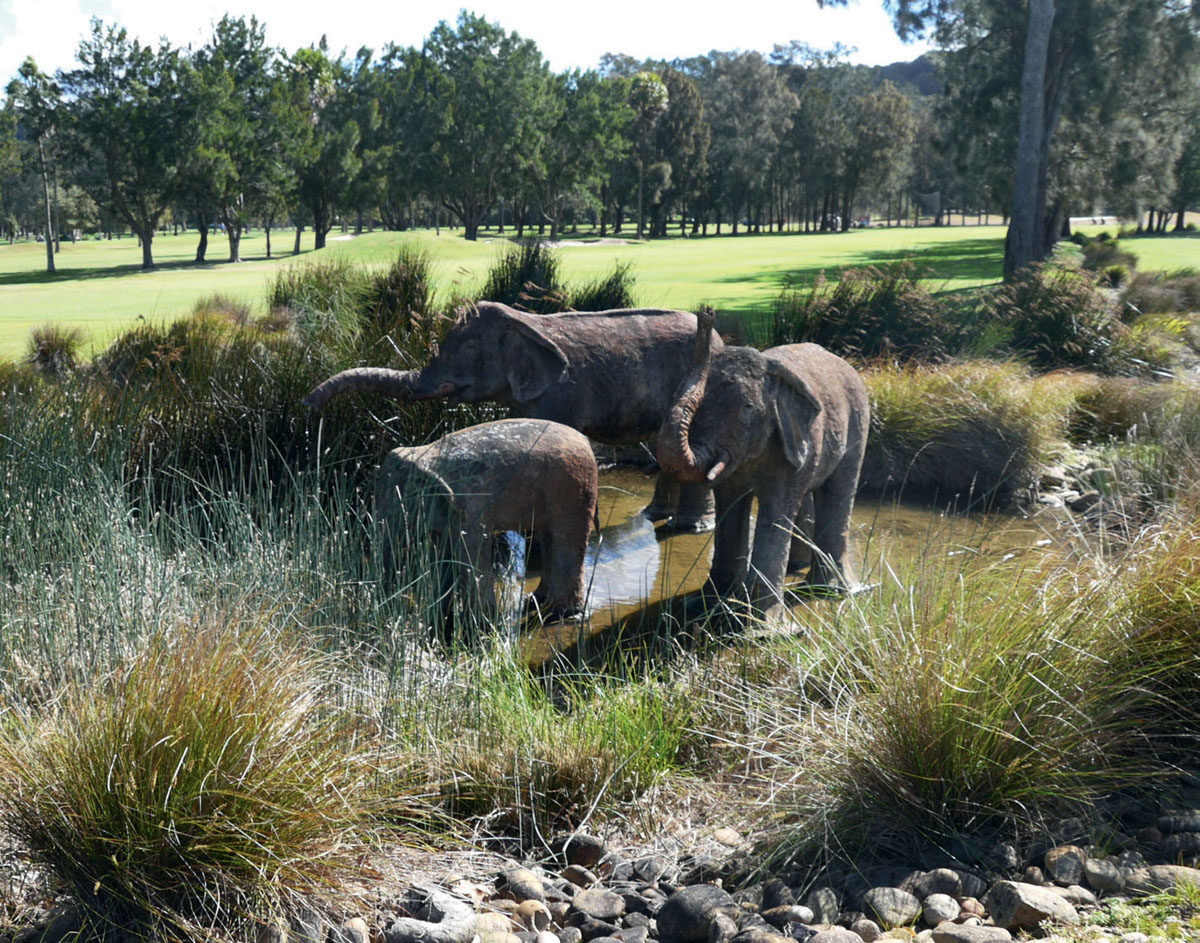 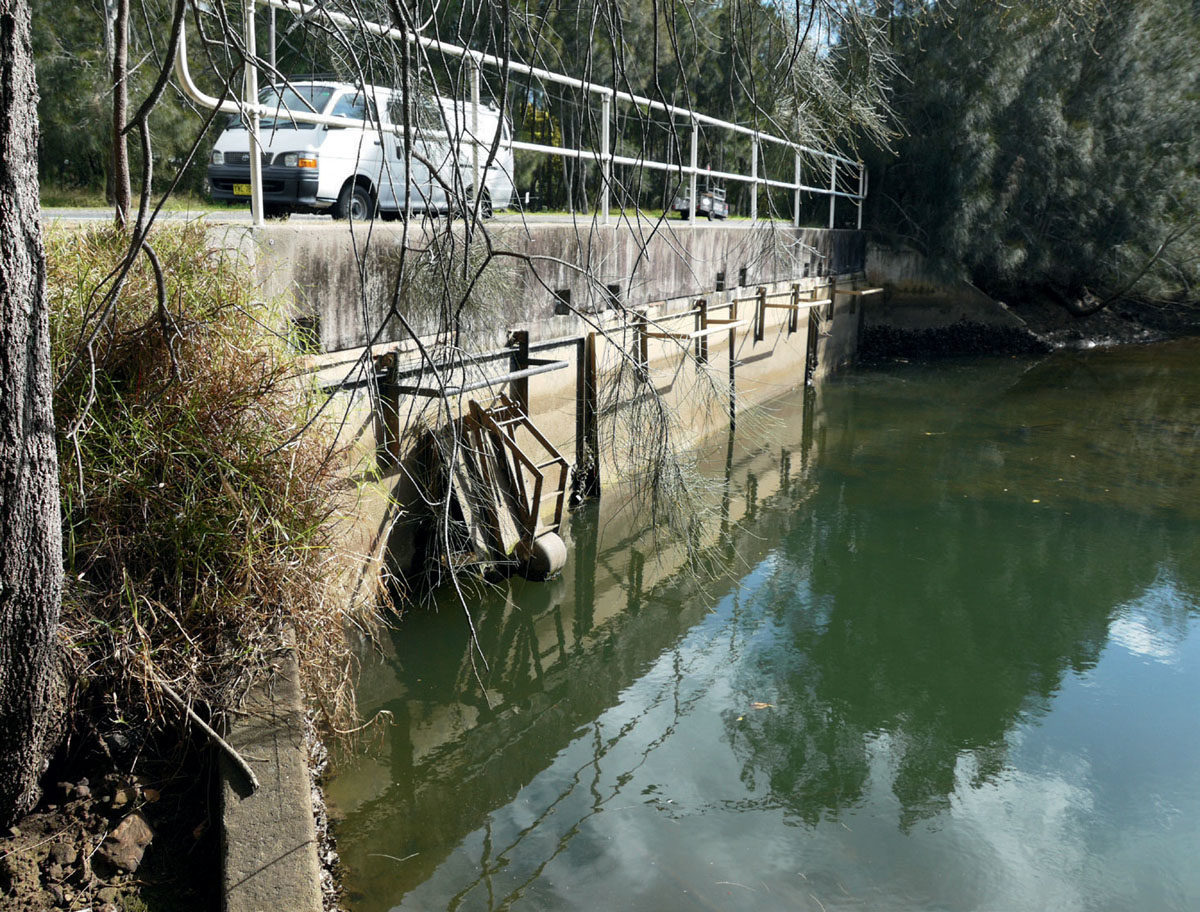 The old poa annua greens are being rebuilt using an A4-A1 bent blend and the hybrid of other grasses found throughout the course will be converted to Santa Ana couch.

As the photos show we have opted for a more aggressive bunker style; the membership quite like it, as it isn’t replicated anywhere else on the northern beaches of Sydney. Nathan Bradbery, lead shaper and director of Golf Spectrum, is doing a brilliant job adding personal flair to the profiles he’s achieving, especially on the bunkers, which on a flat site really help to lift the visual impact of the design.

With hopefully only a few months until the retirement village approval and final settlement of the land sale, Bayview Golf Club plans to do preparatory works to have the course ready to start the major reconstruction by the end of 2017 or early 2018. Eighteen holes will be kept in play for members at all times and based on the staging, only one or two temporary greens should be needed at any time to achieve this.

The club’s superintendent since 2010 is also serving as General Manger; David Stone will control the construction works and associated budgets. David extended his duties to include the General Manager role in 2014 and focused the club’s emphasis firmly on their core business of providing good golf. The resulting course transformation already underway and about to expand in earnest is testament to this and has led to increased patronage and added appreciation of the course in general.

This, of course provides a welcome boost in confidence to the membership about the club’s future, as they begin another major course evolution and move towards the start of the course’s second century.